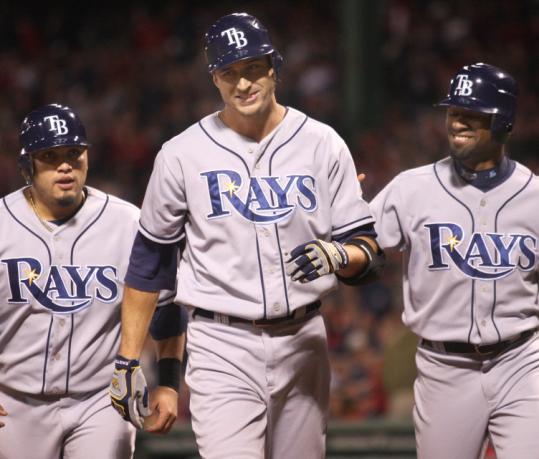 So Mark Teixeira got his wish, a new home by Christmas. The Red Sox? Well, they're not out $170 million.

That might be all that can be said about the developments of recent days, in which the Sox lost out to the Yankees for the first baseman they had been pining for and were hoping would be the biggest new piece in a revamped order. So while the Teixeiras are off checking out Manhattan real estate, the Sox are left to the rest of the free agent market, the trades neglected in the last-minute sweepstakes for the first baseman, and a roster that lacks a catcher with any significant major league experience.

Think something needs to be done? It does, though almost nothing the Sox can do at this point will have anywhere close to the impact the Teixeira signing would have.

To start with, there's the matter of that $170 million. Just because it was offered to Teixeira - and declined, in favor of the $180 million over eight years he got from the Yankees - doesn't mean the Red Sox have that money targeted for someone else. There is no one else, at least not any player (or combination of players) about to get that kind of payout from Boston.

The team will sign at least a couple of players, mostly because it has holes to fill. But that pot of money isn't out there waiting to be spent.

The team maintains that, unlike the Yankees, it has to be pickier about which free agents to sign. It's a team that, right or wrong, believes the Yankees have the upper hand in virtually all major free agent signings, leading to the thought that - at least in the case of Teixeira - a large contract offer with a firm deadline early in the process might have been its best chance to keep the New Yorkers away. That didn't happen.

There will be no $400 million spending sprees like the one the Yankees have gone on this offseason, which is not to say there won't be a spending spree at all. The Sox did open their wallet for J.D. Drew and Daisuke Matsuzaka, and were willing to do so for Teixeira. Other free agents will come around that the Sox will deem worthy, but not this year.

Not for a team that continues to emphasize the long term. Touting strides the organization has made in scouting and player development, general manager Theo Epstein has repeatedly reminded reporters (and fans) that the Sox are in a luxurious position. They have young talent, already in the major leagues and on the cusp.

That isn't to say the Sox aren't in need of an offensive upgrade. They are. And they missed out on a player who isn't replicated in this free agent class, or in ones to come. Sure, there is Lars Anderson - whom the team regards as a potentially significant offensive threat with an arrival date of 2010, if not sooner - looming as its first baseman and power bat of the future, but despite the optimism, he is unproven above Double A.

For obvious reasons, the Sox will not turn their attention to the other impact bat in free agency (Manny Ramirez, for those who forgot). Instead, there is catching, a fourth outfielder, and a middle- to end-of-the-rotation starter to consider.

Despite their recent troubles with Scott Boras, the sides continue to exchange ideas on Jason Varitek's potential return. No market has been established for him, made far more difficult by his status as a Type A free agent. A return to Boston, given his needs and the team's needs, is a possibility.

The Sox, of course, would like to trade for a young catcher - like Arizona's Miguel Montero, or the Texas twosome of Jarrod Saltalamacchia or Taylor Teagarden - to fill the void. But, according to a team source, no trades are on the horizon. Prices have yet to come down for teams intent on stealing a valuable pitching prospect (specifically the Rangers, who like Clay Buchholz).

Getting offense at the position would seem to be more important after missing out on Teixeira, making Varitek harder to hide in the lineup. Saltalamacchia is coming off a stint in the Dominican Winter League in which he hit .364 with a 1.354 OPS and nine home runs in 20 games. He had two errors, as he continues to work on his defense.

Rocco Baldelli's new diagnosis of channelopathy, which can be treated with medication, indicates he could be a less risky signing than when doctors believed he had mitochondrial disorder. But with the fragile Drew in right field, Baldelli might not be the ideal righthanded outfielder off the bench.

The players the Sox add will be nothing like the Yankees' big three of CC Sabathia, A.J. Burnett, and Teixeira, though probably not quite as insignificant as the Sean Casey signing of last offseason.

The Sox had a limit in the Teixeira negotiations, for better or worse. They wouldn't go beyond that. So, now, the team turns to the rest of its offseason wish list. Far less exciting, sure. But there is work still to be done for the 2009 club, even if the numbers won't be nearly as big.