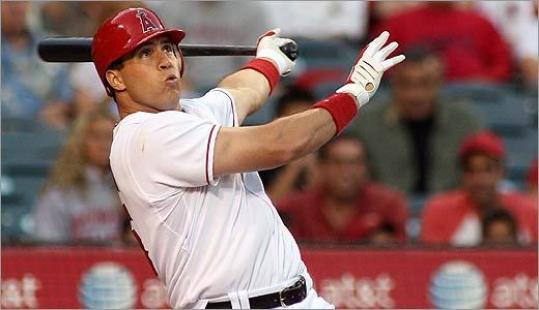 Their familiar and monstrous rivals loomed over the Red Sox the whole time, their deep pockets and pinstripes somehow hidden in plain sight. The real surprise might not be where Mark Teixeira - the 28-year-old slugging first baseman who became the jewel of baseball's offseason - will play for the next eight seasons. It might be that no one really saw it coming.

After a stunning turn yesterday, Red Sox fans are waking up this day before Christmas with a new hardball villain. Mark Charles Teixeira is a New York Yankee after agreeing yesterday to a contract that will pay him roughly $180 million over eight years, in the process jilting the Red Sox and reminding them that the Yankees still hold an unconquerable edge over them.

"From the moment we arrived in Boston in late 2001, we saw it as a monumental challenge," owner John Henry said in an e-mail to the Associated Press, referencing the competition with the Yankees. "We sought to reduce the financial gap and succeeded to a degree. Now with a new stadium filled with revenue op portunities, they have leaped away from us again. So we have to be even more careful in deploying our resources."

According to major league sources, the Sox remained in contact with Teixeira's agent, Scott Boras, even after Henry's declaration last Thursday that they would no longer be a factor in negotiations for Teixeira. But they did not enhance the offer they made that night in Texas - eight years, $168 million - until Monday, when they simply rounded it off to $170 million.

The Sox didn't want to be used by Boras as leverage, the sources said, so they imposed a deadline of Monday night. Boras told them Teixeira was traveling and needed time to make a decision. So the Sox wanted an answer yesterday morning, but in the interim the Washington Nationals increased their offer to $180 million over nine years.

And then the Yankees entered the bidding, offering the same money over one fewer season. Yankees general manager Brian Cashman had met with Teixeira in late November and, according to a Yankees source, won him over instantly. Teixeira liked Cashman's easy manner, and Cashman convinced him he could be part of something exciting and historic.

A Yankees source also said he thought, but wasn't 100 percent sure, that Yankees third baseman Alex Rodriguez placed a call to Teixeira, a former teammate in Texas, to help persuade Teixeira to play in New York.

The Los Angeles Angels, the team Teixeira played for last season after they acquired him in a trade with the Atlanta Braves in July, had ceased negotiations Sunday. The Baltimore Orioles had fallen out of the race, their offer too low to compete. The Yankees remained quiet publicly. All the Red Sox had to do, it appeared, was beat out a team, the Nationals, that lost 102 games last season.

The highest-ranking Red Sox officials, including Henry, flew to Texas to meet with Teixeira last Thursday night. Henry disengaged from negotiations after the meeting, sending an e-mail to reporters that said, "After hearing about his other offers, it seems clear that we are not going to be a factor."

Some baseball sources interpreted the missive as a bluff. The New York Post asked Cashman who made the "other offers" Henry wrote of. "Not us," he said. The rumor mill churned, and executives around the league deemed the Red Sox favorites to sign Teixeira, a label that still fit until yesterday afternoon.

But how could they have forgotten about the Yankees? In February 2004, after a trade agreement the Red Sox and Rangers reached involving Rodriguez was rejected by the Players Association, the Yankees acquired him. In 2006, beloved Boston center fielder Johnny Damon chose the Yankees over the Red Sox, taking a four-year deal worth $52 million once the Sox offered no more than $40 million.

The team Red Sox CEO Larry Lucchino once famously dubbed "The Evil Empire" swooped in again, claiming the most coveted hitter available and leaving the Red Sox without a counter move. The other marquee free agent slugger is Manny Ramirez.

This past season, the Yankees missed the playoffs for the first time in 13 years, an indignity they have seemingly tried to erase before pitchers and catchers report for spring training. The three highest-paid position players ever to play the sport (Rodriguez, shortstop Derek Jeter, and Teixeira) and the highest-paid pitcher ever (CC Sabathia), now all play for the Yankees. The Yankees have devoted more than $400 million to free agent contracts this offseason, nearly all of it on Sabathia, Teixeira, and starting pitcher A.J. Burnett.

The Red Sox, meanwhile, maintained the approach general manager Theo Epstein brought to the team when he was hired in 2002. During his tenure, the Red Sox have awarded no contract larger than the five-year, $70 million deal J.D. Drew signed two years ago.

With Teixeira, the Sox were willing to surpass that, but they refused to become enmeshed in a bidding war with the Yankees.

Teixeira, in one way, was more of a luxury than a necessity for Boston. The Red Sox still have Kevin Youkilis at first base and Mike Lowell at third base. But Lowell is recovering from hip surgery, and many believe the Red Sox needed a bat the caliber of Teixeira's to replace the production Ramirez took with him during his acrimonious exit at last season's trade deadline - particularly with David Ortiz in apparent decline.

Teixeira could have provided not only that powerful bat - he has driven in 100 runs and walloped 30 homers for five straight seasons - but also defense capable of winning a Gold Glove. From now until the time he turns 36, though, the Red Sox will contend with him some 19 games each season, as a player they coveted found his way to the Bronx, again.

In the end, it seems likely the Red Sox front office does not feel crestfallen. Epstein was asked earlier this offseason about the Yankees potentially signing high-priced free agents.

"It's been that way for a long time," Epstein said. "We've done pretty well going toe-to-toe with them with a slightly different model."

Nick Cafardo of the Globe staff contributed to this report; Adam Kilgore can be reached at akilgore@globe.com