Change-up: a nip, tuck for Fenway 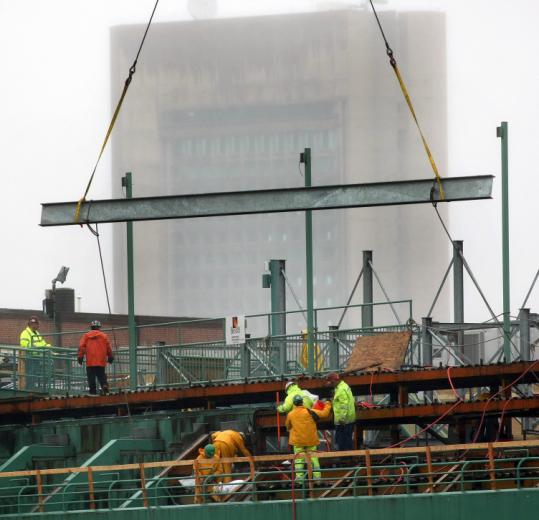 America's oldest ballpark, due to turn 100 in a little more than three years, is receiving another nip and tuck that may be its last major improvement for a while.

"We are in the eighth inning of a nine-inning game with respect to improvements of Fenway Park," Larry Lucchino, president and CEO of the Red Sox, said during a news conference yesterday underneath the upper deck near third base.

Fenway has largely held onto an old-style aesthetic, even as other major league ballparks added domes, ground-level luxury suites, playgrounds, fish tanks, and fireworks cannons. And by design there will be not much change to Fenway's appearance after the current renovations, part of a nine-year project that has cost more than $100 million, all private money.

Lucchino said he hopes the improvements will help attract another All-Star Game to Boston, particularly in 2012, when the park turns 100.

"We do have an interest, and it has been expressed to Major League Baseball," Lucchino said in a phone interview.

In a major improvement project underway this off-season, workers have removed a swath of about 10,000 seats from the lower portion of the seating area, dugout to dugout, so that the concrete underneath can be repaired and waterproofed. For years, rainwater has seeped through the stands into concession booths below, requiring constant patching and other repair work, said Janet Marie Smith, senior vice president for Planning and Development.

Once the concrete is repaired, some sections, such as the Field and Loge Box sections, will get new seats. The wooden grandstand seats that date back to 1934 are being refurbished and widened to league-mandated dimensions of at least 18 inches. The other major renovation is to the right field roof area, where 383 box seats have been removed to make room for 560 new seats.

"The seats will be more comfortable, but that's not the emphasis of the project," Smith said. "The beauty is that, hopefully, the park will not look any different than it did last year, and the fans will probably not notice any changes."

The backdrop of yesterday's news conference was a large crane lowering a steel seating support from the right upper deck. A constant drizzle saturated the field, and construction workers in white hard hats were busy at work in the stands. Underneath the bleachers, construction equipment lined the corridors and the echo of pneumatic machines bounced off the walls. But even with all the commotion, tours were in full swing, with lines of people decked out in Red Sox windbreakers, T-shirts, and hats taking in the sights.

Although seats will be widened, officials said yesterday that as many as 350 additional tickets will be available each game over last year, but capacity will remain at 39,928. The renovations are expected to be complete by mid-March, Smith said.

Since the Henry-Werner Group bought the team in 2002, it has focused on a series of improvements, including adding seats atop the Green Monster in 2003 and 800 seats to the State Street Pavilion this past construction season.

Fenway has one of the league's smallest seating capacities. Other "multipurpose" stadiums, capable of hosting football, soccer, and other sports, can hold more than 50,000 fans. Lucchino said the front office is paying a lot of attention to the new digs of its' main rival, the New York Yankees, who closed storied Yankee Stadium this year in the Bronx and will play at a new stadium built across the street.

"We've been spending a lot of time thinking about what's happening with other ballparks, especially in New York," Lucchino said. "We'll be watching closely how that affects their revenue. There is no reason why we couldn't play here for sometime to come, but ultimately, it will be rebuilt just like any other park."

Lucchino said Fenway could be viable for another 40 years.

Lucchino also addressed the issue of how the sagging economy might affect the club's finances. "We haven't had this kind of economic challenge that the nation is having," he said. "We'll have to wait and see how it plays out."

He added that fielding a strong, competitive team and advertising may be enough to pack the park even in these times when families have to cut back.

Red Sox-related multimedia from around Boston.