Clutch, to their credit 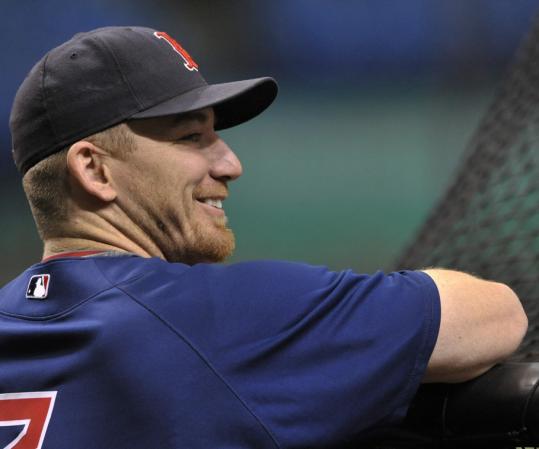 Fans saw Coco's line drive. The manager saw what got him there.

A writer wanted to know if he thought about Dave Roberts. The manager was already thinking about the lineup for St. Pete.

Point of view, you know?

But there was one thing the fans, the writers, and the manager could agree on.

"So we get to keep playing," said Terry Francona, "and that's really thrilling."

We now have another Game 5 to savor, another elimination game in which the Boston Red Sox did the Houdini thing. This time there was no one guy hoggin' the headlines, the way Dave Henderson did in 1986 with his unforgettable game-tying homer off Donnie Moore, or David Ortiz did in 2004 when he fouled off five consecutive Esteban Loaiza two-strike pitches before he dumped that game-winner into center.

Yes, J.D. Drew brought home the winning run in the Thursday night 8-7 masterpiece comeback with a smash over the head of Gabe Gross in the bottom of the ninth, but this will always be remembered as a group effort. This was no One-Man Show. This was "A Chorus Line."

In the first half of the game, Red Sox public relations director John Blake must have made 79 announcements commemorating a Tampa Bay offensive achievement.

"Thirteen Tampa Bay home runs is a new ALCS record for series of any length."

"B.J. Upton has just become the seventh player in LCS history to drive in 10 runs."

Meanwhile, Maddon's decision to flip-flop James Shields and Kazmir to give the lefty a start in Fenway was looking pretty good when Kazmir stifled the Red Sox for six innings. Of course, being Scott Kazmir, he needed 109 pitches to do it, so he was finished after six. Hey, but not to worry. It was 7-0, and this year the Rays have a great bullpen.

Nine hits and two walks (one intentional) later, the Red Sox were hopping on the bus and heading to Logan, while Balfour, Wheeler, and Howell were being booked by Tampa police on arson charges.

"Listen," said Maddon. "It is what it is. I don't dwell on it. Nobody feels worse than the guys out of our bullpen right now. They've done a tremendous job all year.

"Of course, we're upset. Of course, we don't like losing that game. Of course. But to dwell on it does no good whatsoever. We'll lose heart for about a half-hour or so, get on that plane, go home, and then we'll come back out for Game 6 and roll it out there again."

Unlike Francona, he left out the "thrilling" part.