He can prove he's big-game pitcher 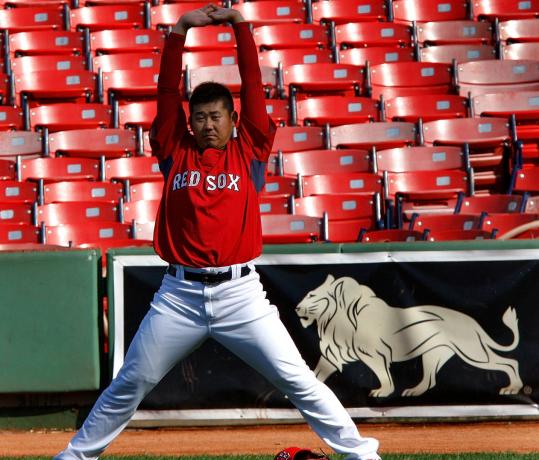 Daisuke Matsuzaka smiled as his translator repeated a reporter's observation, that the Red Sox brought him from the Seibu Lions to Boston so he could pitch games like tonight's. It is a must-win playoff game, the type of night the Sox would once have preferred to be handled by Josh Beckett, currently a husk of himself, or Jon Lester, proved mortal earlier this week.

Now Matsuzaka may be Boston's best hope. He considered the notion, bobbing his head back and forth as if he enjoyed the idea, and answered.

"I'm not Beckett," Matsuzaka said. "But if I can pitch like he did last year and hand the ball off to the guys behind me, that would be great."

If anybody knows how to operate down, 3-1, it's Matsuzaka, now charged with translating his trademark escape acts to a macro scale. The Red Sox will hand him the ball and put their season on his shoulders. Matsuzaka has faced games of this magnitude before - the World Baseball Classic final, Game 7 of the 2007 American League Championship Series - and delivered.

The Sox now face the same situation they did last year, when their starting pitchers saved them - a three-games-to-one deficit. Beckett steamrolled through the Cleveland Indians' lineup in Game 5, igniting the Sox' comeback and setting the tone for their World Series rampage. That task now falls to Matsuzaka against the Tampa Bay Rays.

"I think he will enjoy this challenge a lot," manager Terry Francona said. "The intensity, the meaning, as much as this game means, that will help him. That won't hinder him."

"He has some experience," catcher Jason Varitek said. "He's a man that has been in a lot of big spots in his whole life. Just look forward to him giving us a real strong, competitive start."

The Rays have scored 31 runs in three games, battering a pitcher who throws fastballs in the 96-mile-per-hour range and one who throws knuckleballs in the 65-m.p.h. range. Matsuzaka's unconventional style may be another easily conquered challenge for the Rays, but it could also stifle them as it did in Game 1.

Red Sox starters have lasted only 12 2/3 innings in the past three games, precluding the opportunity to win, Boston's moribund offense aside. Once they fell behind the Indians last season, Sox starters took control of the series. Beckett, Curt Schilling, and Matsuzaka combined to allow five earned runs in 20 innings.

"There's quite a few keys, but we need to start with our pitching," Varitek said. "We need to come out with a quality start."

Matsuzaka pitched well but inefficiently against the Rays during the regular season. He made three starts and went 1-0 with a 3.00 ERA, but he lasted only 15 combined innings in those starts, allowing 11 walks and 24 base runners.

In the ALCS, Matsuzaka changed his approach after a rocky start. He spent the first inning nibbling at the corners and walked three batters before he escaped without allowing a run. He didn't have a good feel for any of his pitches, and none worked particularly well.

He relied instead on his "shutto," a pitch that moves somewhat like a cutter. He rarely used it in the regular season, Matsuzaka said, which he felt made the pitch more effective against the Rays. From the second inning forward, he walked only one as he carried a no-hitter into the seventh and struck out nine, his most since April 1.

"The more I'm able to use that pitch in games," Matsuzaka said, "the better it's going to get over time."

Rays outfielder Carl Crawford thought several of Matsuzaka's pitches were balls until he watched film from the game and realized, to his surprise, they were strikes. Matsuzaka's differing looks and arsenal of pitches gave the Rays an illusion. "The plate looks bigger than it is," Francona said. "That's what good pitchers do."

Matsuzaka threw 4.06 pitches per batter this season, and despite his more efficient approach against the Rays, that barely changed in Game 1 - Tampa Bay batters saw 3.97 on average against him. The figure owed more to his skill than erratic pitching. Matsuzaka made 115 pitches in Game 1. The Rays put only 16 in play.

"Even if I have to throw a lot of pitches, I'm going to do my best to throw to quality spots and keep them guessing and keep them off balance," Matsuzaka said. "But I won't be going into it [with] the exact same game plan as Game 1.

"The Rays' lineup has a lot of aggressive hitters, and I wanted to take advantage of that in the last game. In terms of attacking the strike zone and being aggressive again, that's certainly something I want to keep doing."

Matsuzaka, of course, has not always been aggressive. He often dug himself holes this season, only to emerge unscathed and imbued with confidence. His team needs to mimic him now, with Matsuzaka leading the way.

"He has some scary moments," outfielder Coco Crisp said. "He always gets out of them. We call him the Magic Man. Hopefully, he can bring some of that magic."