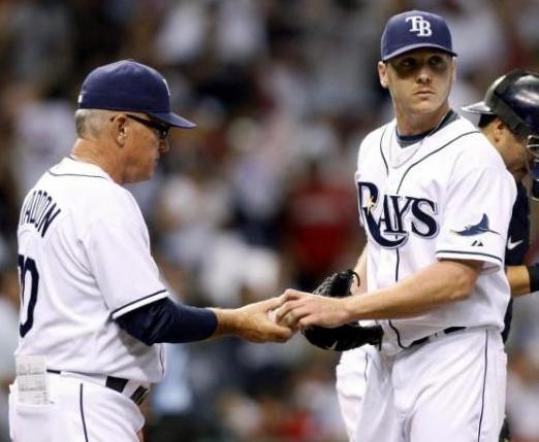 It was an offday, so the story was 175,000 times more important than it would have been otherwise.

Bulletin: Tampa Bay Rays manager Joe Maddon announces that Scott Kazmir, not James Shields, will start tonight's Game 5. Thanks, Joe, for giving us scribes some nice offday material to ponder, debate, analyze, dissect, and scrutinize. Not all skippers are that accommodating.

Did Maddon have a vision? A seance with Gene Mauch? Nah. "We talked about it before the series even began," Maddon explained. "If we got to a point where we are right now, it's kind of consistent with what we've done when he's had a day off after he pitches." Translation: "If he gets knocked out early, I can go to my pen early and often because we've got a day off on Friday."

Should the Red Sox ever come back to win this thing, and if they start on the comeback path by pounding Kazmir, it will be a move Maddon will regret not just now, not just next week, not just next month, not just next year, but for the rest of his life. The baseball issues at hand amount to a rather gigantic mountain of beans in the cosmic diamond scheme of things. Matters like this become the subject of major treatises at SABR conventions, not to mention contemporary chat rooms. More important, they attract the attention of owners whose teams lose 3-1 leads in playoff series.

But Maddon isn't fazed. To him, this is quite logical, for many reasons. Start with the idea that Shields has pitched significantly better in Tropicana Field than he has on the road in general (5-6, 4.82 ERA), and Fenway in particular (0-2, 21.21 ERA). Then consider that Kazmir is 4-4 in Fenway during his career with a 3.02 ERA.

Once upon a time, 24-year-old Scott Kazmir was regarded as something of a Red Sox nemesis. There was, for example, a 2006 two-hit, honest-to-goodness shutout he threw against them just before the All-Star Game. But he has not enjoyed anything close to that type of success against them in 2008. Peruse his last two outings against the Red Sox:

That might scare you or me. We'd be leery of throwing him out there under any circumstances. Those are frightening numbers.

But Maddon says it's not as dire as all that.

"I thought against the Red Sox [in Game 2], he was throwing the ball great in the first inning until that walk to [David Ortiz]," Maddon maintained. "Then it kind of went away a little bit." What happened was a Kevin Youkilis single and a two-run Jason Bay double.

Maddon apparently figures the old All-Star, strikeout leader Kazmir is in there somewhere. "I'm going to say it again," Maddon said. "At any moment, he can just catch fire. The arm is fine. I've seen flashes, and I'd like to see him get off quickly [tonight]; that would be great. And if he does catch fire and he gets the first inning under his belt in good order, this guy can pitch deep into the game."

If he doesn't, well, c'est la guerre. Maddon goes to the pen and nature will take whatever course it chooses. Should the Rays lose, they will head home, where Shields has been superb. If there's a Game 7, he'd feel perfectly comfortable with Matt Garza. It's a Big Picture thing, see?

It's also using the former ace of the Tampa Bay staff as a pawn. No one will say he's expendable, or that Game 5 itself is expendable, but come on. The manager admits there's a great chance he'll need multiple relievers. The manager has a guy lined up to pitch in a building - I love saying that - where he's been 9-2, 2.59 with the same amount of hits and 10 fewer runs scored in 28 1/3 more innings than he's thrown on the road.

Scott Kazmir might go out and pitch a great game, but if he doesn't, Joe Maddon can live with it. He's got a 3-1 lead and he can set the agenda. Let's hope Kazmir's ego can deal with all this.

Terry Francona's official reaction is predictably bland and statesmanlike. "I don't know that it will affect who plays," he said. "It may affect our batting order." He didn't say, "Thank you, Joe," but he could have.

The Sox really didn't do very much with Shields in Game 1. They beat him because Daisuke Matsuzaka was very, very good. They have to feel good right now about seeing Kazmir in a game they must win or go home.

In addition, facing a lefthander in a game they must win or go home means that switch hitters Jason Varitek and Jed Lowrie get to bat righthanded, where they have staggeringly better numbers than they do batting lefthanded. Varitek: .284, .863 OPS righty/.201, .616 OPS lefty. Lowrie: .338, .934 OPS righty/.222, .653 OPS lefty.

Joe Maddon knows this. But he chooses to turn them around in this game, anyway. He is quite willing to risk the consequences. Would he do this if the series were, as they say in match play, all square? I think not.

The skipper of the Rays is a bright guy, a polysyllabic Lafayette grad. He's even an oenophile. Is he overcomplicating things? Is he just showing off? Should he just stick with his rotation and allow the guy who has become his ace to pitch the potential clinching game in turn without allowing for all those exotic contingencies, especially when they're all centered on an essential lack of faith in the man he has chosen to pitch tonight?

Well, if Francona doesn't want to say, "Thank You, Joe," I am taking the liberty of speaking for all those issue-starved scribes from all over the country, and indeed the world, for providing us with a juicy offday topic to ponder, debate, analyze, dissect, and scrutinize. Next time we see you, Joe, the first glass of Cabernet is on us.