Kazmir, not Shields, gets call for Game 5 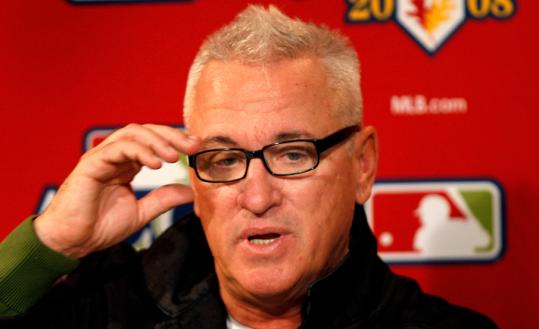 His youthful Rays one win away from advancing to the World Series in their first postseason appearance, Tampa Bay manager Joe Maddon yesterday made what appeared to be a surprise move, naming Scott Kazmir as tonight's starter in Game 5 of the American League Championship Series over James Shields, who had been scheduled to pitch on five days' rest.

Maddon said the decision was aimed at positioning the 24-year-old lefthander with his regular four days' rest and the bullpen support of a full complement of relievers. If the series were to go six games, Shields would draw the start Saturday afternoon at Tropicana Field, where he has pitched much more effectively than on the road this season, compiling a 9-2 record with a 2.59 ERA; 1-1 with a 3.29 ERA in the postseason.

Shields, however, absorbed a 2-0 loss in Game 1 last Friday night at The Trop, where he surrendered two runs in 7 2/3 innings against Daisuke Matsuzaka, Boston's Game 5 starter.

"We talked about it before the series even began," said Maddon, whose Rays annihilated the Sox, 13-4, Tuesday night in Game 4 to take a 3-1 lead in this best-of-seven series. "If we got to a certain point like we are right now, it's kind of consistent with what we've done throughout actually by having a day off after he pitches."

"I was very eager for this opportunity to get back out there and try to redeem myself from my last outing," Kazmir said. "It's something that wasn't a surprise. Maddon and I, we've been talking about it ever since we got to Boston [Sunday] about maybe changing it up and everything like that, so it wasn't really a surprise to me."

What was, though, was the way Kazmir struggled against the Sox. Then again, given his struggles this season, maybe it shouldn't have come as any great shock.

After getting two quick outs in the first inning, Kazmir struggled to get out of the frame. He threw 38 pitches, one more than he did in the first inning of his start in the Division Series against the White Sox, giving up two runs on Jason Bay's double.

Kazmir departed in the fifth with the game tied at 5 after giving up solo homers to Dustin Pedroia and Kevin Youkilis.

"We know Scotty's difficulties recently," said Maddon, also aware that Kazmir has struggled against the Red Sox, with a 9.00 ERA in four regular-season starts. "Although you could look at the game against the White Sox, bad first inning, but he got deeper into the game. I thought the other day against the Red Sox he was throwing the ball great the first inning, of course until the walk to [David Ortiz]. Then it kind of got away from him a little bit.

"But we felt it was the right thing to do right now. We liked the fact that he was pitching with an open day following, the ability to utilize the entire bullpen well, we also liked the idea of him pitching here, and we liked the idea of Shields being able to pitch at home, if necessary.

"Again, this did not just happen last night or the night before. We talked about this prior to the series."

Asked how Shields took the news, Maddon responded, "Great. I had been talking to both of them a day or two in advance just to give them both a heads-up that if it did occur, that we were potentially going to do this. So they were both aware of it in advance. Shieldsy was great."

Maddon said the switch was in no way influenced by the fact umpire Derryl Cousins, whom Kazmir blasted after a 4-2 loss at Anaheim June 11, is expected to be behind home plate in Game 6, which would have coincided with Kazmir's scheduled turn.

"No, it really didn't [have any impact], and that was just coincidence, because again, I didn't know how the umpires were going to be set up before we discussed all this," Maddon said. "I'm very aware of what happened in Anaheim. I actually got kicked out of that game. So, no, the answer is it had nothing to do with it."

While he told the St. Petersburg Times that keeping him away from a possible confrontation with Cousins "might be a good idea," Kazmir said yesterday at Fenway Park that Cousins's presence behind the plate had no bearing on Maddon's decision.

"I don't think that's an issue at all," he said. "I wasn't worried about that at all. I don't think that had any way of [impacting] a decision for Joe, just based on that. I think that it was just kind of a coincidence how that happened, so it doesn't bother me at all."

Maddon is confident his lefthander is up to the magnitude of the assignment, with the Rays one win from clinching a World Series berth.

"We're not looking to give them any kind of crack," Maddon said, when asked if his decision might open a window of opportunity for the Sox. "It's just, again, we believe that Kaz can pitch well tomorrow . . . It's something we had talked [about] prior to coming into this whole event. And it just happened to play out that way.

"Again, it's not like it's a last-minute adjustment," he added. "I don't like those. And if it was, I probably would not have done it. But it was something that had been discussed, and I'm good with that."