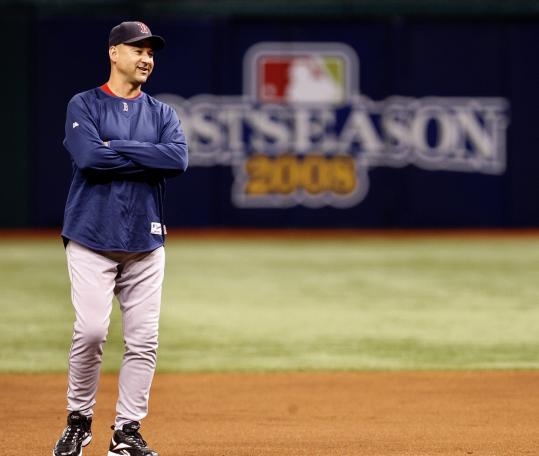 ST. PETERSBURG, Fla. - Most every night, roughly one hour before the scheduled first pitch, Terry Francona basks in the calm. For the man who has brought historic stability to the manager's office at Fenway Park, this is when his job repays him.

This is his time.

"Everything's over - the media stuff, the challenges or whatever requires your attention - and the only thing in front of us is the game," said Francona, who tonight will lead the Red Sox into Game 1 of the American League Championship Series against the Tampa Bay Rays. "I've always liked to be in the dugout when guys go out to the field [to warm up]. It's just a time for me when it's very relaxing."

Husband of 26 years, dedicated father of four, and loyal skipper of the local nine, Terry Jon Francona recently completed his fifth full regular season as the manager of the Red Sox, an extraordinary feat. Until this year, only one Red Sox manager in history, Joe Cronin, endured at least five consecutive full seasons in what may be the hottest seat in town. Since the birth of the franchise in 1901, there have been more Red Sox managers (44) than there have been American presidents through all of US history.

And so now, along comes Francona, known to many as Tito, same as his father, who played 15 major league seasons from 1956-70. While America is preparing for another presidential election in a time of economic crisis, the Red Sox are in the midst of what is indisputably their Golden Age; no matter what happens to the team over the next month, there will be a 44th US president before there is a 45th Red Sox manager.

Now 49, Francona has yet to even begin a three-year contract extension through 2011, with a two-year option that could very well keep him in Boston through 2013. And yet, during his time in Boston, Francona already has accomplished a great deal more than merely guide the Red Sox to four postseason appearances and two World Series championships (and counting?).

What Francona has done, quite simply, is redefine a tenuous Red Sox position historically calibrated in dog years, where lesser men have aged seven times as fast and accomplished a fraction as much.

"You've got to be politically correct in this job, but [getting fired] is one thing I've never feared. If I do my job as best I can, I'm fine," Francona said. Boston "is a volatile place. It's a hotbed. People are so passionate, and maybe that's the downside, but there's so much upside, too. You can't have people be that passionate without catching some flak. I think I understand that. There are probably three or four times a year where, for whatever reason, it gets under my skin for about a day or a day-and-a-half. And then I say, 'Wait, why are you letting this get to you?' And then I'm OK."

In today's world, after all, flak comes from all directions.

How in god's name can you justify that??? You are being paid millions of dollars and even my 9 year old son can do a better job than (a) sleep on the wheel manager like you.

Last month, while the Red Sox were playing these same Rays in this same stadium with the AL East Division title on the line, Sox outfielder Jason Bay left the club for the birth of his second child. Francona joked that the Red Sox were hoping the baby arrived on an off day later in the week, but that Mrs. Bay "didn't cooperate." With Bay absent from the lineup, Tampa won the final two games of the series by a combined score of 12-4.

When news of Bay's leave became public, annoyed Sox fans sent Francona e-mails (much like the one above), chastising the manager for being too easy on his players.

Nonetheless, with the possible exception of the enigmatic Manny Ramírez, it is difficult to recount any time during Francona's career in Boston when players have publicly or privately groused about the manager or their experience in Boston, something that was once quite common.

"He always puts his players first and believes in them," Red Sox owner John Henry wrote in an e-mail when asked to identify something he has learned about Francona over the last five years. "He knows what to ask from them and how to ask it. I can't imagine a player anywhere in baseball who would not want to play for him."

For all of the trust and loyalty that Francona has cultivated in his clubhouse - he and second baseman Dustin Pedroia frequently play cribbage together, for instance - those bonds are nonetheless tested. Earlier this week, for instance, Francona pinch hit for catcher and captain Jason Varitek in Game 3 of the Division Series, a decision that clearly annoyed Varitek; the next night, Varitek contributed a key hit just the same, reinforcing a philosophy the manager has adhered to since taking the helm in 2004.

"Loyalty takes time," he said back in 2004. "Part of the reason you try to build relationships is because there comes a time when you're going to have to tell someone something they don't want to hear."

Are you really that stupid? . . . You botched the inning big time . . . You have absolutely no brains and you are loyal too much to guys like Varitek and handed the division to Tampa.

On Monday, after the Red Sox defeated the Los Angeles Angels to clinch their fourth trip to the ALCS in the last six years, Francona emerged from his office and stepped into a small corridor outside the home clubhouse at Fenway Park. Francona kissed his wife, Jacque (pronounced Jackie), and embraced his daughter Jamie, a high school freshman. Francona's oldest child, son Nick, frequently can be found in the manager's office at Fenway. Daughters Alyssa and Leah are students at the University of North Carolina.

On more than one occasion, Francona has acknowledged that the worst part of a career in baseball is the time spent away from his family.

"I think she worries about me," he said of his wife. "If you talked to guys I played with, I think they'd laugh that I became a manager. I was pretty carefree and this job has kind of taken some of that away. My guard's always up in Boston because it has to be. It's hard for me to understand it sometimes, so I know it's hard for her."

And as for his father, who will turn 75 next month? Francona expresses a familiar filial regret, acknowledging that he does not speak with the original Tito, who lives in New Brighton, Pa., "as much as I should." Yet the son and father spoke recently, with the Sox just four wins from another chance to play for a world title, Tito the older having a full understanding of what Tito the younger is going through.

No PH for tek in 9th, no jacoby with nobody out..You are a MORON !!

Lest anyone think that the manager harbors some regret, think again. Francona always has taken the bad with the good. He managed four seasons with a wretched Philadelphia Phillies team from 1997-2000, sometimes wondering whether he would ever get the chance to manage again. Now, the three-year, $12 million extension he signed has made him one of the highest-paid managers in baseball.

Entering the league championship series against the Rays, Francona has a career postseason record of 25-10, a winning percentage of .714 that places him first among managers with at least 20 postseason games of experience. His teams are 8-0 in World Series play, making him the only manager in history to start his World Series career with so many consecutive victories.

Through it all, Francona has cultivated a relationship, too, with Sox general manager Theo Epstein, whom Francona trusts implicitly. Epstein feels precisely the same way. After the Sox elected to trade Ramírez at the end of July - a matter on which Epstein fully supported his manager despite opposition from owner Henry - Francona made it a point to say he saw the support of his boss as being unconditional at those times it mattered most.

"When the chips are down, I know where I can go," Francona said.

Does that mean the Red Sox will win another world title? More than anyone, Francona knows that is impossible to know. Baseball is an unpredictable game and managing is an unstable profession, and so the manager has come to appreciate the simple pleasures and the more complex ones.

"This is hard. This is the hardest job I've ever had. Saying that, it's the best job I've ever had," Francona said. "Striking that balance isn't always the easiest thing. There are times of the year when it gets the better of me and I'll get disappointed in myself. There are usually a couple of times of year where I'll snap at Theo or something, and he'll be like, 'Whoa.' And then the next day I'll say, 'Hey, I'm just worn out,' but he already knows. He knows me."

"But it's still my job to handle it," said the manager of the Red Sox.

Tony Massarotti can be reached at tmassarotti@globe.com and can be read at www.boston.com/massarotti