To the finish, nothing comes easy for them 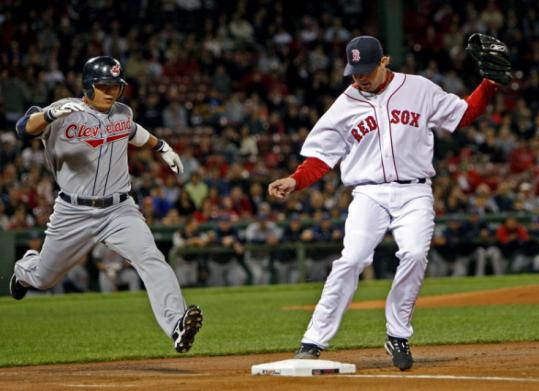 Josh Beckett has the throw from Jeff Bailey, and the good footwork, to get Shin-Soo Choo at first to end the first inning. (Jim Davis/Globe Staff)
By Bob Ryan Globe Columnist / September 23, 2008
Text size – +

The Red Sox soon will be in postseason play. Some fans may think this is their birthright, but Terry Francona doesn't.

"It's a big deal getting to the playoffs," he reminds us.

You think this was easy? I don't. Somebody tells you before the year begins that Big Papi will miss 50 of the first 155 games; that J.D. Drew will miss 48 (well, that one you might have bought); that Mike Lowell would miss 43; that Jason Varitek would have a paltry 33 extra-base hits and a .365 slugging percentage; and that, oh yeah, Manny Ramírez would scandalously weasel his way out of town, you're thinking "wait till next year," no? Well, I would've.

Then throw in no Curt Schilling all year and Clay Buchholz, his presumptive heir in the rotation, submitting a messy 2-9, 6.75 season, capped off by Okey-Dokey having a very topsy-turvy year, and you're thinking, "Hey, can't win every year," right?

But somehow, some way, they're getting in. They're one more victory or Yankee loss from officially securing a berth, and Francona has to see what transpires the rest of this week. Winning the division remains the goal. Forget the pride factor. Francona would much rather open here with two against Chicago than out in Anaheim with two against those annoying Angels, who have been a puzzle for his squad this year, but as long as he's playing in October, you won't hear any moaning from Francona.

Yes, I realize the Red Sox aren't the only ones who've had adversity. Tampa Bay deserves all the praise anyone can muster for surviving the loss of Carl Crawford, who has not played since Aug. 9, and Evan Longoria, who was on his way to being a runaway choice as American League Rookie of the Year when a pitched ball broke his hand Aug. 7. But Joe Maddon, who can start preparing his AL Manager of the Year acceptance speech (perhaps there'll be a good tip on an affordable quality Shiraz), kept the Rays chugging along. Never forget that after stumbling into the All-Star break with seven straight losses, the Rays compiled the best record in the league over the first six weeks of the second half.

And no matter how much you may hate the Yankees, things could not have gone worse for them. Two-time 19-game winner Chien-Ming Wang hasn't pitched since June 15 after injuring himself in a base-running mishap. Hideki Matsui has played in only 93 games. Jorge Posada, the best-hitting catcher in the league, played in a mere 51. Jose Molina, forever fixed in history as the last man to homer in Yankee Stadium II, is a nice substitute, for sure. But he's not Jorge Posada. Sorry, but you have to cut the Bombahs some slack.

The Red Sox never have been great this year. That just wasn't possible. The longest winning streak of the season was seven, way back in April. They've never put together anything resembling a dazzling streak, but they have distinguished themselves as classic grinders, never more so than in the span between Aug. 1 and Sept. 7, when they won 9 of 11 series, losing one and splitting one. When it was over, they were still in second place. But they were plus-26 (84-58) and they were ensconced in the wild card.

By the way, take note of that beginning date.

Let the record show that the manager is well pleased with the lads.

"I think it's pretty obvious that in the last six or seven weeks I've really enjoyed this team," he says. "I love the way it's gone about its business. When you see guys going in one direction - the right direction - it's really enjoyable."

Come on now. It is a fascinating coincidence that the run in question began on Aug. 1, which is the day the Red Sox played their first game of the 2008 season without a certain eccentric slugging outfielder. Or is it? Interesting choice of words, wouldn't you say? "One direction - the right direction."

We who were listening to the skipper knew where he was going with that one. And you can be sure he knew that we knew and that he didn't mind being quoted on the subject. He offered no qualifiers. It doesn't matter in the least to Terry Francona what Manny Ramírez does for the Dodgers, at least until he has to pitch to him in the World Series. What matters to him is that Manny was getting in the way of everyone else with his antics. If Manny is finally happy, fine. Manny couldn't be happier in LA than Francona is in Boston with the guys he now has to work with.

"There's not a lack of effort - ever," he points out. "There's a tremendous amount of positive energy. When they lose a game, they just show up the next day and play."

Given what they've had to do without this season, can enough attention be paid to those who have assumed the day-to-day on-field leadership roles on this team? Nope, there can't. Arguments are raging all over New England as to the identity of the 2008 Red Sox MVP. Dustin Pedroia or Kevin Youkilis? Kevin Youkilis or Dustin Pedroia?

It's a very tough call, one no one should have to make. The only thing we know is that they have been the two great offensive constants on this team, one no more important in the big scheme of things than the other, and each a valuable glove man, too.

But it always comes down to pitching, doesn't it? Jon Lester has asserted himself as one of the premier lefties in the league. Daisuke Matsuzaka has compiled a gaudy 18-2 record that you could love even more had he managed to average at least six innings per start. Until last night's baffling outing (three hit batsmen), Josh Beckett was showing late-season signs of being that postseason killer again. Tim Wakefield has pitched significantly better than his won-lost record, and Paul Byrd has been a vital addition to the mix. The set-up people have had their ups and downs (Javier Lopez quietly having a very nice year), but more recent ups than downs. And then there is the fiery Jonathan Papelbon, and let's hope no one takes 40 saves for granted.

By the way, guess which staff leads the major leagues in shutouts? Yup, your beloved Bosox, who have 16.