THIS STORY HAS BEEN FORMATTED FOR EASY PRINTING
Indians 4, Red Sox 3

Sox get hung up on basepaths, so clinch must wait 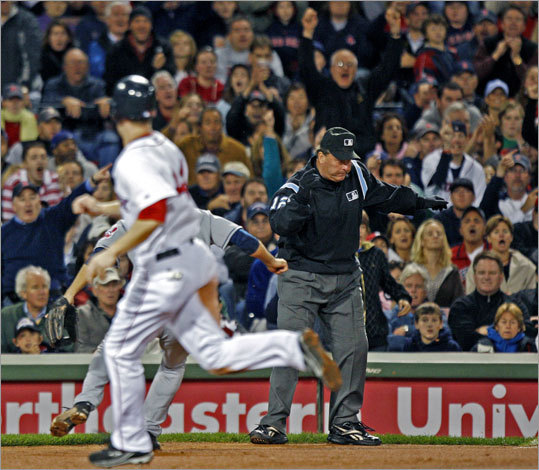 (Jim Davis / Globe Staff) Third base umpire Gerry Davis signals "fair ball" after it apparently hit him after getting by Indians 3B Jamey Carroll, as the Red Sox Jason Bay heads for third on the sixth inning hit by Jeff Bailey. Bay rounded third, and headed for home, but stopped then was caught in a rundown and tagged out to end the inning.
By Adam Kilgore Globe Staff / September 23, 2008
Text size – +

DeMarlo Hale retreated to the Red Sox clubhouse, where they had put away the champagne and beer, and waited. He changed out of his uniform and relaxed for a moment. Only then did he walk upstairs to the video room.

"You go running up there, you're questioning yourself," said Hale, the Red Sox third base coach. "Not too many times I do that."

If ever a circumstance gave Hale a reason to doubt himself, it was the one that arrived last night in the sixth inning of the Red Sox' 4-3 loss to the Cleveland Indians, a defeat rooted in the absurd that postponed a playoff-clinching celebration. With a victory, the Red Sox would have clinched a postseason spot. Instead, they fell 2 1/2 games behind the Tampa Bay Rays, winners in Baltimore, for the AL East lead, and their magic number remained at one.

The Red Sox will wake up this morning still wondering how, exactly, it happened. Josh Beckett, baseball's reigning king of autumn, lost to a 25-year-old lefthander named Zach Jackson, who was making his ninth start of the season. The Sox stranded six men in scoring position in the final four innings.

But all of the oddities paled against what happened in the sixth, the play that sent Hale to the room above the clubhouse. Jeff Bailey came to the plate with two outs. The Red Sox trailed, 4-2. Jason Bay stood on second, Jason Varitek on first. The count climbed to 3-and-2. Jackson fired. Bailey smashed a rocket down the third base line.

Hale, standing in the third base box, watched the ball scoot past third baseman Jamey Carroll's dive and then fixed his gaze on Bay, who had bolted with the pitch.

"My read is to see if it's going to hit off that angled wall," Hale said. "That's kind of a tough read, with a man on second base and the ball hit down the line with that angled wall.

"I know I have to make a decision, in case the ball hits the wall. I can't put him in a spot where my decision-making becomes a problem. I kind of have to make that decision."

So Hale, wary of the jutting wall, windmilled Bay home. Still watching Bay and glancing at Varitek, Hale saw in his peripheral vision that the ball rolled into shallow left field. He thought, "It must have hit off the wall."

Bailey rounded first, glanced toward left field, and saw the ball, too. He suspected something strange had happened. "It couldn't have kicked back that far," he thought.

Of the principals involved, only Bay and Varitek saw what actually happened to Bailey's certain double - the ball smacked third base umpire Gerry Davis in his right thigh as he pointed "fair." When Bay saw the ball drill Davis, he didn't know how far it would bounce from Carroll. He stopped halfway to home plate.

Where Bay saw danger, Varitek saw opportunity. Both Carroll and shortstop Jhonny Peralta had chased the ball, leaving third base vacated. Varitek bolted, head down, looking at Hale. He didn't see Bay heading back to third until he had reached the base.

Carroll corralled the ball and fired to catcher Kelly Shoppach. Bay scrambled back to third, which Varitek had occupied. Shoppach rifled back to Carroll, who tagged out Bay.

Bailey watched the ball ping-pong back and forth, turned to the second base umpire and asked, "What happened?" The International League Player of the Year this season, Bailey thought he had pounded the most significant hit of his career. Then it vanished.

Davis looked down and ambled back to his position. He had played a more crucial role than he ever imagined, and he felt terrible.

"Of course," Davis said. "The ball obviously was hit very hard and it went right over the bag, so I tried to stay with it as long as I could. Unfortunately, I stayed with it too long.

"I think everyone knows how I felt about it. I would have preferred it not happen, but occasionally it does."

Hale could only wonder if he had done the right thing. The Red Sox could have clinched in so many other ways, most glaringly with a base hit by Jed Lowrie in the final at-bat of the game, which ended with his second strikeout.

But the play still gnawed at him. An hour after the game, he had found his answer to the pivotal question: Should anyone, most especially himself, have done anything differently?

"I don't know," Hale said. "Maybe I'll look at it again in another 12 hours and see it different. Right now, I'll do the same thing."

Tony Massarotti of the Globe staff contributed to this report.