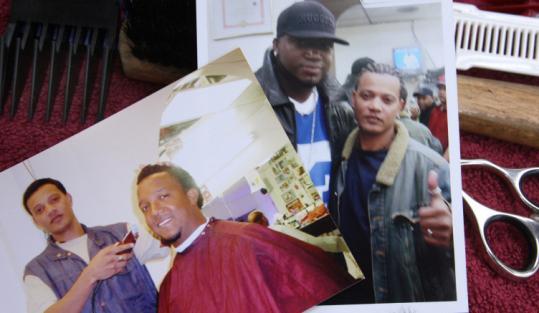 Felipe Gomez, a Jamaica Plain barber, still wears his Red Sox cap, the bill crisp across his brow. He still roots for his adopted hometown team, and he always looks forward to visits from such players as David Ortiz when they are in need of a haircut.

But Gomez, a 37-year-old native of the Dominican Republic, feels that the current team isn't the same as it was just a few years ago - or even a few months ago. With no Pedro Martínez and no Manny Ramírez, with Julio Lugo on the disabled list and possibly headed for the bench whenever he does return, Gomez and other Latino fans see a team that looks a lot less like them.

"We feel like we've lost something personal in our team," Gomez said recently, cutting hair at the Fernandez Barbershop in Jamaica Plain, where many Latino Sox players come to get haircuts. "It's a big community, the Latinos. It makes us feel proud to at least have representation."

That representation had come in what now seems a flash of Red Sox history, when some of baseball's biggest stars - Martínez, Ramírez, and Ortiz - and starting shortstop Orlando Cabrera were all on the club, and all Latino. A team whose stars typically looked like Ted Williams or Carl Yastrzemski, and were celebrated by fans who looked the same, suddenly tapped into a whole new baseball culture in Boston, one that spoke Spanish and exuberantly embraced its own.

Jubilant crowds of Latinos gathered four deep at the Jamaica Plain barbershops where they got their hair cut. They handed out autographs at the tiny Hispanic markets and music stores they sometimes haunted. The Globe published game-day stories in Spanish when Martínez pitched. And when the Sox won the World Series in October 2004, fans took to the streets, Dominican flags in hand.

For the moment, however, in another September run, that has changed. Of the seven Latinos on the Sox's current roster, few are stars. Devern Hansack, called up from Triple-A Pawtucket this month, would likely not be recognized if he wore his uniform on the Red Line. Bartolo Colon, Javier Lopez, and Manny Delcarmen are pitchers who've played sparingly or in relief, and Colon was recently suspended by the team. Infielder Alex Cora has played in fewer than 71 games all season.

That leaves Ortiz, who's from the Dominican Republic, and Mike Lowell, who was born to Cuban parents in Puerto Rico, as the only everyday Latin American starters on the Sox. Manny? He's been replaced by Jason Bay, a Canadian. Lugo? Jed Lowrie, an Oregon native, has filled in for him. As a result, Boston is regularly trotting out one of the most homogeneous teams in baseball this September.

"I've always been a Red Sox fan. That's not going to change. I want to be a Red Sox fan," said Javy Fernandez, a 22-year-old Dominican-American who owns a market in Dorchester. "But I get more excited when I see my people - people of my ethnicity - play on my team. It makes you feel like you're playing on the team also."

Jed Hoyer, the Red Sox's assistant general manager, declined to comment specifically on any of the recent moves, but he stressed that all decisions are based on a player's talent, not ethnicity. When making personnel moves, like such as not re-signing Pedro in 2004 or trading Manny in July, Hoyer said club officials are only considering one thing: what's best for the team.

"It's unfair to take a simple snapshot right now," Hoyer said, speaking of the roster's current makeup. "The process has been - and will always be - completely colorblind. We're always looking to find the best talent possible."

The Sox, historically, have a troubled record of racial diversity. They not only snubbed black players under owner Tom Yawkey - including future Hall-of-Famer Jackie Robinson, who tried out for the Sox in 1945 - but they were the last all-white major league team, adding the first black player in 1959, 12 years after Robinson joined the Brooklyn Dodgers.

Complaints about the team's whiteness persisted into the 1980s and '90s. And even now, the team boasts just one African-American player: center fielder Coco Crisp. But that may signify a larger problem within baseball than within the Sox front office. While the Red Sox may not field many Latino or black stars, they do have high-profile Asian players, and in the case of Jacoby Ellsbury, an outfielder of Native American descent.

Just 8 percent of all players on Opening Day this year were black, a 20-year low, according to an annual study published by the Institute for Diversity and Ethics in Sport at the University of Central Florida. It's a trend that concerns league officials.

The Sox club has worked hard to counter its reputation of having racial issues since new ownership took over in 2002. The front office has dedicated itself to recruiting Latin American players. And it established a diversity committee, chaired by Sam Kennedy, the Sox chief of sales and marketing, to develop partnerships with minority-owned businesses and bring more diversity to Fenway Park.

The club hands out 14,000 free tickets a year, said Kennedy, often targeting people who aren't able to afford the pricey seats. But when it comes to those who take the field, even Latino players say they just want to be playing with the best possible talent.

When asked recently whether he had noticed fewer Latinos in the clubhouse, Lowell, the team's third baseman, replied, "I would say yes, because we have less Latinos." But that doesn't bother him. What matters, Lowell said, is if the team is built to win.

Ortiz agrees. "Things change," he said. "This is a business." And Cora, from Puerto Rico, believes that fans understand that, whether they're rooting for the Red Sox or for, say, the New York Mets, a team laden with Latino stars, including Pedro Martínez.

Still, it's hard not to notice the difference between today and just a few years ago. Ortiz admits he misses his friends, Pedro and Manny. And Latino fans miss them as well.

Kennedy said the loss of Latino stars hasn't changed the team's marketing approach. The Sox remain dedicated, he said, to diversity. In an ideal world, Kennedy said, "the product on the field, the players on the field, would represent the community in which we live."

But when the goal is playing baseball in October, Kennedy said, there's only so much the team can do.

"When a Pedro Martínez leaves, a Manny Ramírez leaves - those are two Hall-of-Fame players leaving the organization - that's something you're absolutely going to notice," he said. "But baseball strategists have to put the best baseball players on the field, and they've got a pretty good track record."

As yet another postseason approaches - the team's fifth in six years - it's hard to argue that point.

Come October, Latino fans will be tuning the playoff games in just as they did in years past, and they will be rooting for the Sox, just as they always have.

Or at least most of them will.

If the Sox were to meet the Mets in the World Series next month, Reyito Santiago, a Roxbury man and a Sox fan, said he would be torn.

As a Puerto Rican, he conceded, it would be hard not to cheer for all those Latino stars in New York. "I like the Mets," Santiago admitted. "I have to tell you the truth."