THIS STORY HAS BEEN FORMATTED FOR EASY PRINTING
Red Sox 7, Orioles 2

Matsuzaka walks away with win 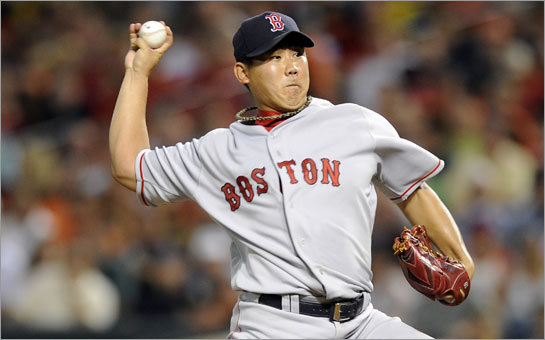 BALTIMORE - It was hours before the game, before Daisuke Matsuzaka would take the mound, walk too many, and still win. Before Jason Varitek would show for the second straight night that he isn't quite done as a hitter. Before another power swing (and result) by Kevin Youkilis. That was when Josh Beckett stood at his locker in Camden Yards and spoke without his usual defiance.

Acknowledging for the first time since his start Sunday that something was wrong - a tingling and numbness in his right arm and fingers - Beckett allowed that his next start would have to be pushed back from Saturday to at least Tuesday. The trademark confidence didn't even emerge when he was asked if he would make that start against the Yankees, as he said, "I don't know. It's still seven days away, so we'll see."

With Tim Wakefield on the disabled list and Clay Buchholz struggling in the extreme, the burden falls on Jon Lester and Matsuzaka. Lester did his part Monday night. Last night, it was up to Matsuzaka.

He did what the Red Sox needed him to do, to be sure, though perhaps not in the way they would have wanted. Matsuzaka (15-2) walked five, yet still got the victory as the Sox scorched Daniel Cabrera for six runs on their way to a 7-2 win in front of a sellout crowd of 48,515 at Camden Yards.

Matsuzaka's high-wire act moved toward the record books. He became the first Sox starter since 1953 to win six games in which he walked at least five. Those are the most in the American League since Texas's Bobby Witt won eight such games in 1987. Matsuzaka has issued 77 walks this season, most in the league.

But as much of a concern as those numbers are, there were far brighter spots on offense. Varitek and Youkilis, to be exact.

Varitek's power made a return appearance, with a lefthanded home run and a righthanded double. His average is just .218, but there seem to be good signs.

"Just trying to continue to solidify and simplify things, because I can make things very complicated," said Varitek, who will get tonight off. "I'm my own worst enemy at times.

"I've had competitive at-bats. I went through that month-and-a-half stretch, or whatever it was, where I had some pretty doggone feeble at-bats. But I do that to myself. I've always done it. Just usually it's not lasted that long."

Youkilis, meanwhile, hasn't had a problem. Not like last year, and the year before, when he lost his stroke as the season wore on. Last night he blasted his 24th home run, a 425-foot two-run shot to left-center field in the fifth, increasing the Sox' lead to 5-2. They scored two in the first, added another on Varitek's home run in the second, then got three in the fifth to break things open before adding one in the eighth.

The offense was needed as Matsuzaka continued to put runners on.

"Just get them on first and second and let him start pitching," manager Terry Francona said. "It's kind of a tightrope act sometimes. But he has the ability to make pitches, have some power on his fastball. Just a lot of men on base; only two of them scored.

"If you have a lot of chances, sooner or later, somebody's going to get a hit."

When Matsuzaka got in trouble in the fourth, which ended with him throwing his 90th pitch, it looked like that might be it. He had to give up a hit with the bases loaded eventually, right?

With three men on and just one out, Matsuzaka went to 3-and-1 on Melvin Mora. But the third baseman swung and missed. Then on a slider that clearly would have been ball four, nearly in the dirt, Mora swung and missed again. Strike three.

Aubrey Huff followed by popping up to Youkilis, making opponents 0 for 14 against Matsuzaka with the bases loaded, the most hitless at-bats in that situation against one pitcher in the major leagues this season.

"He's not giving in," Dustin Pedroia said. "We know that. Sometimes it's a little frustrating, but we've got to be on our toes, expect the ball to be hit to us, and the pace is real slow. But that's who he is."

Still, won't it catch up to him at some point?