THIS STORY HAS BEEN FORMATTED FOR EASY PRINTING
Red Sox 5, A's 2

The captain of the Red Sox now believes the team is climbing toward the mountaintop.

Whatever happens from here on out, Jason Varitek believes the wins of the past three days are precisely what they were hoping for after a team meeting in the aftermath of Thursday's Manny Ramírez deal.

The negative energy of the past few weeks is gone. The Sox defeated the Oakland A's, 5-2, yesterday at Fenway Park to complete a three-game sweep, and they have created momentum they hope will make them better.

"This is our team now," said Varitek after the victory and before the Sox embarked on a seven-game swing to Kansas City and Chicago. "The guys we have in this room are the guys we're going to be playing with from here on out. We feel good about that. We have to continue to compete. Get quality at-bats. Pitch quality games. I think everyone in here likes where we're heading."

The Sox held the A's to five hits as Daisuke Matsuzaka earned his 12th win with a six-inning performance (2 earned runs, 4 hits, 8 strikeouts, 2 walks). Hideki Okajima, Manny Delcarmen, and Jonathan Papelbon pitched three shutout innings - the bullpen allowed just one run in 10 2/3 innings in the series. The bats were again timely with young shortstop Jed Lowrie contributing a two-run triple to the triangle in the fourth, Coco Crisp a pair of sacrifice flies, and Kevin Youkilis a first-inning RBI single.

The Sox are in second place in the American League East, three games behind the Rays. "Where we are at the present means that we're good," said Varitek. "To go where we need to go, and where we want to go, we have to pitch like we did the last three games."

Boston has a chance to continue the upward trend with three games in Kansas City, another team down on its luck. The White Sox are a different story, but all the Sox really care about is playing consistently on the road.

Varitek pointed out, "We won our last three road games [at Seattle]. That's what we have to dwell on, not what we did before that on the road. We have to take the same mind-set that we have at home to the road. If we do that, we'll continue to win games."

This series was the perfect scenario for the Sox. They made a controversial deal, swept the A's to regain their confidence, and headed out on the road. They were able to not lose ground to the Rays, who just won't fade away, and keep ahead of the Yankees, who split their series with the Angels. It seems the entire team was on board with getting Ramírez out of town, and newly acquired Jason Bay had a very good start to his Red Sox career, which made players and fans feel much better about the trade of Manny.

"One of the things we talked about was not looking back or looking forward and just attacking what's at hand," said manager Terry Francona. "We did that very well. Daisuke came out and threw his fastball, stayed in his delivery, and the ball came out of his hand real well. He looked like he was pitching with confidence. We played with energy. It was a good day."

Before the series, it seemed the Sox had lost that energy. Was it the losing? Was it the constant antics of Ramírez?

"The momentum will carry over tomorrow if [Clay] Buchholz takes it and goes deep," said Francona. "That's always the case in this game. The momentum goes as far as our starting pitcher allows."

Matsuzaka, 4-1 with a 2.38 ERA with 38 strikeouts in seven starts since June 27, threw 105 pitches in his six innings. It was the 14th time he had limited opponents to two or fewer runs in his 19 starts this season. When there was a 37-minute rain delay in the bottom of the sixth, Matsuzaka's day was over, though Francona indicated he wouldn't have sent him out for the seventh.

The pitcher's finest moment was in the second inning. After surrendering a leadoff triple to the triangle to Carlos Gonzalez, he struck out Jack Hannahan and Bobby Crosby and got Daric Barton to fly to center. He struck out the side in the fourth - Jack Cust, Frank Thomas, and Gonzalez.

The Sox had a steady-enough offense. Dustin Pedroia doubled to lead off the first and was driven home by Youkilis's single. In the fourth, after Mike Lowell's double and Bay's single put runners at the corners, Lowrie really sent the ball for ride into the triangle. His first major league triple bolstered his bid to keep the starting shortstop job even when Julio Logo returns from his quad injury (which may not be for another month).

"He's giving us a lot of production," said Francona of Lowrie. "In limited at-bats he's gotten some big hits, some timely hits, but he's played the game and blended in like our young guys do. Mixed in with some veterans, he's helping us win games."

The Sox added a third run in the fourth when Crisp got Lowrie home on a sacrifice fly after Varitek walked. In the sixth, after the rain delay, Crisp was able to get Bay home with another sac fly.

And really, that's all that was necessary, as the bullpen allowed only three runners over its three innings. Okajima, always the adventure, allowed a walk and a hit in the seventh but escaped. Delcarmen walked a batter in the eighth but got a key out when his nemesis, Thomas, hit a ball hard only to have it run down in right-center by Jacoby Ellsbury. And Papelbon earned his 31st save with a flawless ninth.

The A's are nowhere near the team they were earlier this season when they had Rich Harden and Joe Blanton and were actually contending. Now they're rebuilding again and they're easy for a good team to dispose of.

"We're going on this trip in a good frame of mind," said Lowell. "We've created a better feeling for ourselves. We know what we have to do and we feel we have the players that we can do it with.

"I think everyone is on the same page. I think it's going to be a fun couple of months ahead." 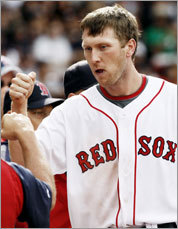