Most fans ready for Manny being an ex-Sox

While grateful for 8 exciting years, many are relieved at exit for eccentric slugger 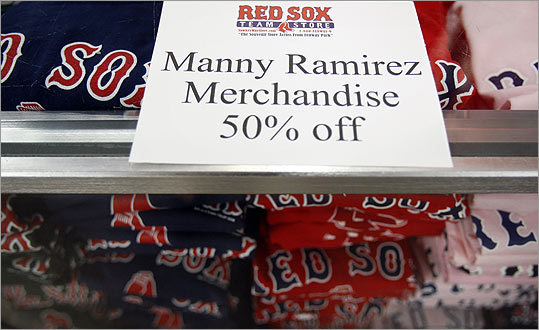 For years, Manny Ramírez delighted the Fenway faithful. Red Sox fans marveled at the slugger's towering home runs and reveled in his ringing line drives. When he stepped to the plate, they chanted "Manny! Manny!" with giddy anticipation, knowing one swing could send the park into pandemonium.

Yesterday, many fans, even some of those who had chanted the loudest, cheered his departure. It was time, most said, for Manny to be Manny somewhere else.

Turning the page on an eight-year era highlighted by two world championships, legions of Sox enthusiasts welcomed the stunning trade of a longtime fan favorite to the Los Angeles Dodgers. For most, however, the farewell was bittersweet.

After a series of controversies in recent weeks involving the unpredictable outfielder, many fans labeled Ramírez a selfish player who was putting his contract demands before the needs of the team. Others said the disgruntled superstar had worn out his welcome with his increasingly disruptive behavior.

If fans said good riddance, most still thanked him for the memories. Even fans who hailed the trade said it was a shame Ramírez won't finish his career in Boston and said they can't help but wish him well. They grew nostalgic at the thought of life without the surefire Hall of Famer, without the fun-loving player everyone called by his first name.

"I'll miss him a lot," said Pete Mento, a 38-year-old fan from Rockport who was visiting a memorabilia shop across from Fenway Park shortly after the trade was announced late yesterday. "It's been fabulous watching him, it really has. But it had gone on enough. It was time."

Mento was at Fenway Wednesday and watched the team commit four errors in dropping a third straight game to the Los Angeles Angels. Like many fans, he came to the conclusion that all the controversy surrounding Ramírez was probably hurting the team's focus and that a trade was best for everyone.

"Enough of his shenanigans," said Yvonne Gardner, who was visiting from Farmington, Conn. "Maybe that's why the team wasn't playing so well. Enough of his mouth. He's a great player, but enough is enough. Move on."

As the 4 p.m. trade deadline neared, Sox fans were on high alert. They relentlessly refreshed their Web browsers, checked their mobile phones every few minutes for updates, and ducked into sports bars to learn whether and where Ramírez would be dealt.

Between 3 to 5 p.m., boston.com received more than 1.6 million page views, double the amount of traffic at that time on a normal weekday, said David Beard, editor of boston.com. The sudden burst in traffic "taxed our webservers."

Like the Red Sox themselves, the Ramírez watch brought the city together, a unifying force that connected the sports bars around Fenway Park to the cafes along Newbury Street and points in between. As the trade rumors flew fast and furious, fans braced for the fate of the iconic Boston athlete.

When the news came, contradicting early reports that Ramírez would probably remain in Boston, many Sox fans were stunned. Plenty of summers the Sox had weighed trading Ramírez, but many doubted the team would ever see it through.

"I never thought they'd actually trade him!" said Kelly McDaniel, a 20-year-old from Norwood who watched ESPN from the kids' section of the Red Sox Team Store, where Ramírez paraphernalia was instantly marked down 50 percent. Ramírez jerseys were selling briskly, she said.

Ramírez had always been enigmatic. An indifferent fielder who often lollygagged to first, he frustrated fans and management with his nonchalant approach. His quirks, half-endearing, half-maddening, were so abundant that they had long ago earned their own catchphrase: "Manny being Manny." Controversy was his constant companion.

Through it all, the countless trade demands and baffling behavior, the fans' love endured.

But this summer, that changed. A series of incidents that included pushing the team's traveling secretary, sitting out two games against top pitchers, and proclaiming that the Sox didn't deserve a player like him soured many steadfast Ramírez supporters.

Bill Rosenberg said Ramírez used to be entertaining. No more, he said.

"I don't think there was a breaking point, but kind of a gradual thing," said Rosenberg, a 64-year-old from Brookline, as he entered Park Street T station. "How many times can you take the conversation, 'I want to be traded, I want to be traded'? It kind of wore everybody out."

"I always thought he was a crybaby and a selfish ballplayer," said Gil Stringer, 57, a Newport resident strolling on Newbury Street.

At the souvenir shop, a group of fans gathered around a television to get the details on the trade. Dave Wiper, a 44-year-old fan in a Red Sox hat and shirt, rubbed his hands excitedly when he saw the statistics for the team's new left fielder, Jason Bay.

"How old is Bay?" he asked the others.

After a pause, Wiper remembered he had tickets to tonight's home game. The dawning of a new era, he said.

"Think he'll be in the lineup?" he asked.

Dina Rudick of the Globe staff and Globe correspondent John Guilfoil contributed to this report.