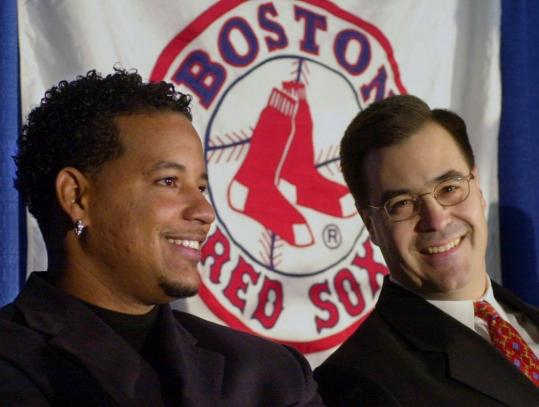 Dan Duquette, then the general manager of the Red Sox, introduced Manny Ramírez to the media after signing the slugger to an eight-year contract in December 2000. (Elise Amendola/Associated Press/File)
Email|Print|Single Page| Text size – + By Dan Shaughnessy Globe Columnist / August 1, 2008

We're going to miss the majestic homers, the pajama pants, the goofy antics in left field, and the bathroom breaks and cellphone calls from inside the Wall.

The Red Sox dumped Manny yesterday. In a deadline deal as shocking as the one that shipped Nomar Garciaparra out of town on the same date in 2004, the Sox traded Ramírez to the Los Angeles Dodgers in a three-team swap (including the Pittsburgh Pirates) that brings 29-year-old outfielder Jason Bay to Boston.

On paper, the Sox are not as strong as they were when you woke up yesterday morning. They have parted with a 500-homer-hitting, surefire Hall of Famer who made eight All-Star teams in 7 1/2 years with Boston. A latter-day Jimmie Foxx, Ramírez was brought to the Red Sox by former general manager Dan Duquette and delivered the goods throughout his tenure. He won a World Series MVP Award in 2004, and "Manny being Manny" became part of our language.

From the start, Manny was a human bobblehead doll, a huggable cartoon character with savant hitting skill. Fans, especially youngsters, absolutely loved the guy. The Sox tonight should brace for early backlash from the sizable faction of Red Sox Nation that will always worship at the Altar of Manny.

In the early years, most of Manny's off-field stuff was harmless. He'd skip the All-Star Game and the trip to the White House. He'd be late to spring training and we'd all chuckle. He was a perfect sidecar character for the Cowboy Up Sox of Kevin Millar, Bronson Arroyo, Derek Lowe, Pedro Martínez, and Johnny Damon. One by one, those players left town and Manny was alone to carry the mantle of goofiness. He did it well and still put up the numbers.

Too bad his final days were so ugly. In the end, Manny had few friends in his own clubhouse and much of the fan base had turned against him.

In February, Manny came to spring training on time, and in great shape. He'd worked out at the Athletes' Performance Institute in Arizona over the winter. He spoke more freely with the media and seemed finally happy and secure with his place in Boston. He was in the final year of his contract, and there was a good chance that in the upcoming offseason, the Sox would trigger a $20 million club option to bring him back.

Then things started to happen. On a night when the Celtics were playing the Lakers in the NBA Finals, Manny slapped Kevin Youkilis, igniting a dugout scuffle. On June 29, Ramírez attacked 64-year-old traveling secretary Jack McCormick when the club official said he might have difficulty satisfying Manny's exorbitant, last-minute ticket request. The club sanctioned Ramírez privately, but there was no suspension. A week later, manager Terry Francona sent Manny up to pinch hit against Yankees ace Mariano Rivera. It was Manny's day off, and the slugger appeared totally uninterested, looking at three strikes without removing the bat from his shoulder.

During the All-Star break, Manny made remarks critical of Sox ownership regarding his past contract negotiations. Owner John W. Henry responded with an e-mail in which he said he was "personally offended."

Nine days ago, prior to the final game of a West Coast trip, Manny told Francona he was unable to play because of a previously unreported knee injury. The tipping point came one week ago tonight when Manny pulled the same stunt before the first game of a three-game set with the Yankees.

That was it. The Sox decided they were done with him. They'd been Manny's prisoner too long. It was unanimous upstairs. Henry, Tom Werner, Larry Lucchino, Theo Epstein, and Francona were all steamed. One teammate called Manny's bailout "a disgrace." The Sox sent him out for an MRI on both knees, then made sure the media knew he was not injured. They threatened to suspend Manny if he didn't play the next day. Manny played.

Then he started yapping. He said he was done with them. He said they didn't deserve him.

Theo and the minions went to work. Manny had stripped the Sox of most of their leverage, but they were intent on dealing him anyway. The Sox gave up a ton in this deal. They parted with their cleanup hitter. They gave up two prospects. They're paying Manny's salary. And they forfeited the two high draft picks they'd have gotten if they lost him to free agency. Bay is good, but he's not that good.

At the end, Manny didn't care about winning. He didn't care about anything except Manny and the ego-driven wallet measuring that motivates so many of today's superstars. He did the Sox no favors, shooting his way out of town, but he got what he wanted. He gets to play in Los Angeles for Joe Torre. He gets to work toward his next contract - money he'll never possibly have time to spend.

Ultimately, this trade is a demonstration of how badly Boston wanted to get rid of Manny. It wasn't about home runs or on-base percentage. But it had to be done out of fairness to the manager and the other 24 Red Sox players who are here to win.