THIS STORY HAS BEEN FORMATTED FOR EASY PRINTING
Yankees 5, Red Sox 4 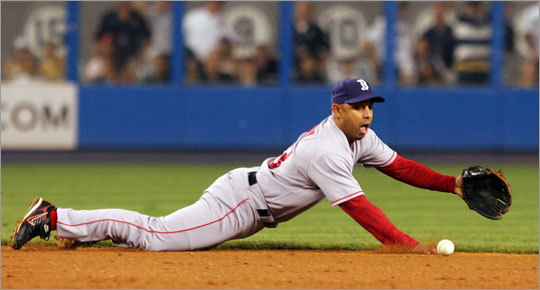 NEW YORK - And, as a parting gift on a trip already fraught with more than its share of peril for the Red Sox, Yankees pitcher Joba Chamberlain threw a 95-mile-an-hour-plus fastball behind Kevin Youkilis.

Intent? Only Joba could know for sure.

But given the history between the two, and what took place last night before Chamberlain's radar went wiggy, the available evidence suggests that there was purpose behind the pitch.

"What I want to say, I'm not going to say, because I'll probably get fined by Major League Baseball, so that's all I've got to say about it," Youkilis said.

There would be no soft landings on this trip, neither for Youkilis nor the Sox, who blew one more lead last night before heading home after winning just 3 of 10 games on a three-city trip that dropped them five games behind the Tampa Bay Rays in the AL East.

The Sox and their seven newly minted All-Stars lost, 5-4, to the Yankees in 10 innings after a startlingly passive pinch-hit appearance by Manny Ramírez in the ninth with the potential go-ahead run just 90 feet away.

Ramírez, spared having to face Chamberlain by manager Terry Francona, who kept him out of the starting lineup, never offered at three straight cut fastballs from Mariano Rivera, watching all three go by for strikes. End of inning.

An inning later, rookie Brett Gardner's two-out infield hit off the glove of shortstop Alex Cora scored Robinson Cano from second for the winning run. Cano had led off with a ground-ball base hit off Jonathan Papelbon and was sacrificed to second before Gardner, playing in place of Johnny Damon, who is on the disabled list, fouled off three two-strike pitches, then hit a grounder that Cora was unable to smother.

Rivera shattered Varitek's bat on the first pitch on a comebacker to the mound, before Ramírez came to the plate, batting for Kevin Cash.

In 21 previous appearances against the Yankees closer since the start of the 2003 season, Ramírez had whiffed only twice, both times going down swinging. He'd taken a called third strike only twice against Rivera in his career, including the first time he ever faced Rivera, 13 years ago.

But as one teammate mentioned last night, Ramírez does not resemble a future Hall of Famer when called upon to pinch hit. He is 3 for 26 (.115) as a pinch hitter in his career, including 10 whiffs.

"I don't think it was passive," Francona said when someone framed a question that way. "I'm not going to rate his energy. Mo made some good pitches. I've seen Manny lay off several pitches he doesn't think he can get to. Mo just made his pitches."

Last night, Youkilis twice reached for 0-and-2 pitches and slapped singles to right. Then, when Chamberlain threw a full-count pitch to Coco Crisp in the dirt, Youkilis slid hard into Chamberlain, his spikes slamming into the pitcher's right foot, as he scored on the wild pitch.

That was in the fifth. An inning later, Chamberlain threw a strike to Youkilis, then flung one behind Youkilis's back. Youkilis took a step toward the mound, but decided restraint was the better course.

Chamberlain was not issued a warning, and Youkilis drew a walk before being erased on a double play.

Youkilis was asked if he was surprised that no warning was issued.

Yankees manager Joe Girardi was less restrained than Youkilis. Girardi was ejected in the home half of the sixth for bellowing his opinion of Laz Diaz's strike zone from the home dugout. Diaz gave him the thumb, and Girardi came out to give the umpire an earful before leaving.

The Yankees, trailing 3-1 at the time, responded. Gardner singled off Sox starter Tim Wakefield, stole second, and scored on Derek Jeter's base hit. Lugo made a leaping catch of Bobby Abreu's liner and turned it into a double play, otherwise the Yanks might have had more.

With Chamberlain lifted for a reliever, Dave Robertson, the Sox expanded their lead to 4-2. Lugo beat out an infield hit, took second on Jeter's throwing error, and scored on a double by Cash, only his fifth hit in his last 42 at-bats.

But the Yankees rallied to tie it in the seventh. Alex Rodriguez, who had homered in the second off Wakefield, tying Mickey Mantle for 13th on the all-time list with No. 536 - flared a single to right. Jason Giambi flied to right, and Francona went to Javier Lopez, who had been his most reliable lefty out of the pen.

When the Sox left home after Wakefield and three relievers combined to shut out Arizona, 5-0, they were in first place by a game over the Rays. When they arrived home under the cover of darkness this morning, they were down five games to the Rays, who have won seven in a row and whose latest conquest, a 9-2 thumping of the Royals, already had been posted on the scoreboard when the Sox and Yankees took the field.

The Sox had not played terribly on this trip; the starting pitching, in particular, had been very good. Entering last night's game, the starters had a 3.05 ERA through the first nine games, and when Wakefield made it through the first six innings last night, that made it the seventh time a Sox starter had gone at least six.

But the one-run defeats - six of them on this trip, beginning with an 11-10 loss to the Astros in which the Sox failed to hold a 9-6 lead - have taken their toll. The bullpen foundered, with an 8.40 ERA in its last eight games before last night and losses in its last four decisions.

Offensively, Ramírez (5 for 31) failed to hit in two of his favorite ballparks, Tropicana Field and Yankee Stadium. Pedroia (21 for 44) and Mike Lowell (12 RBIs) had carried much of the load, while Lugo (5 for 28), Varitek (4 for 31), and Crisp (3 for 16) were all as unproductive as Ramírez. The Sox hit just seven home runs on the trip, and hit as many as two just once, in a 3-2 loss to the Astros last Sunday.

Even the running game suffered. The Sox were caught in their last seven stolen base attempts, five times by the Yankees in the first three games of this series.

But the Sox generated enough heat to score three times in the fifth. Singles by Youkilis and Sean Casey put runners on the corners. Youkilis scored on the 3-and-2 wild pitch to Crisp, Jacoby Ellsbury drew another full-count walk, and Pedroia singled two runners home for a 3-1 lead.

"Sure, they're frustrating, you'd probably rather lose 15-5," Youkilis said of the one-run defeats. "But we're in every game. We just have to finish them off."