Boston's dirt dogs may be tough on opposing pitchers, but try doing their laundry 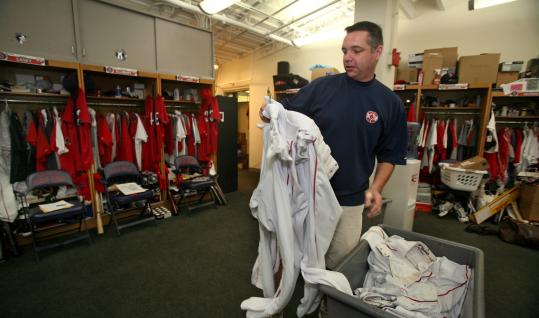 With so many positive vibes about the Red Sox, it's easy to ignore the team's, shall we say, dirty laundry. But locker-room insider Steve Murphy says there's more of it than you can imagine.

When the Red Sox played a double header last month, Murphy said, his crew had to wash everything between the two games. "Some guys like to wear the same pants if they're on a good streak of some sort. We make sure we get them back to them."

When the Sox take the field, all fans see are their crisp, glittering home white uniforms. The effort behind the scenes to keep players properly outfitted, however, is close to a never-ending task, with clubhouse attendants routinely working 13-hour days to keep up with more wardrobe changes than some Broadway shows, and another crew working through the night to power-wash the grass and dirt stains from the pants worn by sec ond baseman Dustin Pedroia or center fielder Jacoby Ellsbury.

When the Yankees are in town, and games drag on for four hours, Murphy and his fellow "clubbies" might still be sorting laundry at 2 a.m. During the playoffs, which have later starting times, that's sometimes 3 a.m.

"Every single piece of laundry is labeled," Murphy says, pointing out Kevin Youkilis's number "20" written in black marker on a pair of white socks. "When you sort the laundry, if you get a pitcher's number you put it in one pile, and a hitter's number in another. You sort them all on the couch over there. Pitchers go to the left of the couch, hitters to the right."

But doing the team's laundry isn't just about pumping out fresh clothes at all hours. It's about hanging a white game jersey on the appropriate hook so it's the first thing a player called up from the minor leagues sees. And hanging his red socks on the small, ankle-high hooks in his locker.

It's about scrubbing the dirt - or, on rainy days, mud - off every cleat with a hard-wire wooden brush. And combing the locker room for a player's lost lucky sock, even though hundreds of identical spare pairs are sitting in the storage room.

When Nomar Garciaparra was in the midst of a 30-game hitting streak in 1997, he wore the same exact clothes for every game.

"We had to make sure they got back in his locker. He could tell if they weren't the same. He knew by the wear on them," said Edward "Pookie" Jackson, a clubhouse attendant for the past 14 years. "Players can tell if it's the same. Plus, sometimes they'll put a certain marking . . . a B and a P for batting practice and a G for game. And they don't tell you where they put them. One guy who does that is Beckett. Everything is marked, but he won't tell us where."

And if Josh Beckett gets the wrong undershirt back?

"He's good about it," Jackson said. "We have a lot of chores to do here, and they understand the hard work. We try to keep everything accurate to the best of our abilities. Knock on wood, we've got a pretty good streak going. Nothing's been lost lately."

Orphaned or unidentifiable garments, should there be any, end up exactly where you'd expect them: in the clubhouse's cluttered "Lost and Found" locker. Murphy reaches in and pulls out a Daisuke Matsuzaka sock. "This is labeled, but we can't find the other one."

The preparation for a typical weeknight game begins at noon, when Murphy, Jackson, and the other clubbies arrive at the park and pull out players' red batting-practice shirts and hats. (Another group of attendants in the visitors' locker room does the same for the day's opponents.) "Then, while they're out there for batting practice, you see the white game shirts go up" on the hooks, Murphy explains. The first load of laundry, a small one, happens around lunchtime, consisting mostly of sweat pants or T-shirts from the weight room or indoor batting cages. The official laundry detergent of the Boston Red Sox is simply "whatever's on sale," Murphy says.

About an hour before game time, the attendants place plastic laundry bins "strategically" across the floor. If a player wants anything he's been wearing at practice washed, he throws it in a bin. If he doesn't want it washed - and there's no requirement to wash anything - he hangs it up in his locker, where no one touches it.

Inevitably some clothes, as in a teenager's room, end up on the floor.

"Some guys don't make it in the bin. The more time you got in the big leagues, the more you tolerate it," says Murphy. "With a rookie, if you see him miss the bin, you kind of say, 'Hey, put it in the bin.' "

By the sixth inning everything's washed, sorted, and returned to the lockers. Clubbies vacuum the room, prop up the chairs, and wait for the process to begin all over again at the game's conclusion.

The most important garments, the polyester game jerseys and pants, get special treatment. Hung on racks after each contest, they are hosed down with soapy, high-pressure sprays, like those at a do-it-yourself car wash.

Players are issued just two sets of the home uniform, jersey and pants, for the entire season - "We do have a budget," Jackson says - so even the toughest grass and dirt stains must be washed out.

"If it's a muddy night out there, it can take forever. So we pray for no rain," Murphy says.

Because the clubhouse staff is so small, a separate night crew works the wee hours to have the uniforms ready by 9 a.m. Murphy and Jackson usually punch out by 1 or 2 a.m., after sorting hundreds of pieces of clothing for the 25 players, plus another seven or eight coaches and staff members, and returning them to individual lockers.

Even with that simple step, they have to take care, as some players like their shirts hung on the rack in a particular order. "Some guys are real, real neat," Murphy says.

With 81 home games, much of the work becomes routine - but not everything. On a hot day, pitchers and catchers might soak through their uniforms after a few innings and require a change of clothes. Players lose weight or gain weight throughout the season, which means ordering new pants with waistlines that fit. Minor-leaguers come up and need uniforms pronto (most have measurements taken in spring training, which makes things easier).

On special occasions, such as Mother's Day or Earth Day, attendants will slap stickers of pink ribbons or recycling logos on the jerseys. When the weather gets stifling hot in midsummer, they'll reach into the closet for special jerseys made of a Cool-Max-type material. "They're more breathable, and you can't tell the difference on TV," Jackson says.

Lastly, there are the "getaway days," when everything's thrown shotgun into travel bags as players bolt for the airport within an hour after the last pitch.

On those nights, the clubbies don't even have time to do laundry. Instead, they ship everything off dirty for clubhouse attendants at the away stadium to tackle. When a visiting team arrives at Fenway with its dirty laundry, the Sox staff returns the favor.

Players, for the most part, say they don't take clean uniforms for granted.

"I don't know how they get those stains out, but you come to the yard, and they're gone," says Ellsbury, owner of the worst dirt stains on the team thanks to his frequent steals.

"Everything's always clean and fresh," agrees reliever Manny Delcarmen, who grew up in Hyde Park. "The guys try to make it comfortable for us. They work a lot."

Murphy, a former special-education teacher who, on a lark, applied for an opening on the clubhouse staff two years ago, says he's learned it all on the job.

"I played college basketball, so I usually had other people doing my laundry," he says. "But I do have pride in this. The guys make you feel appreciated. Then you see them win the World Series, and you feel that you were a part of it."

Peter DeMarco can be reached at demarco@globe.com.