Schilling to have surgery 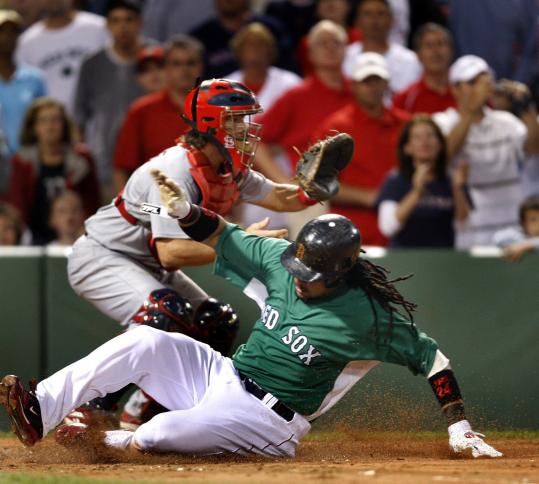 The Curt Schilling saga may have come to an end. In his weekly appearance on WEEI yesterday morning, the Red Sox righthander announced he will have surgery on his right shoulder, likely ending his career.

"None of this makes me bitter or angry. It is what it is. In that sense, honestly, it's very, very easy for me, because of what I've been able to experience compared to what I wanted when I first started my career. But if I have some say in how this is going to end, I want it to be different than what it is right now."

While Schilling had been progressing in his comeback, reaching the point where he was throwing bullpen sessions, there was an ominous sign Tuesday. Manager Terry Francona said Schilling had reached a "plateau" during a frustrating week. After a "painful" session June 13 in Cincinnati, according to Schilling, his throwing was shut down and he returned to Boston to be examined by team medical director Thomas Gill. Dr. Craig Morgan, who has operated on Schilling's shoulder in the past, also examined him Monday.

Morgan will perform the surgery, tentatively scheduled for Monday at 1 p.m. in Wilmington, Del. The procedure will be biceps tenodesis surgery, in which the diseased biceps tendon is detached from the bone and reattached in another location. Morgan will also determine, via arthroscopic examination, whether there are other issues with the shoul der, including potential damage to the labrum and rotator cuff. If that is the case, it is even less likely Schilling could resume his career.

"The key issue there is frankly the rotator cuff," Morgan said. "If he does not have significant rotator cuff involvement, there's a good chance, even at age 41, that he can come back and pitch. But he must accept the fact that this may be career-ending."

If the biceps tendon is the sole problem, Schilling could be throwing again in four months, and could be ready to take the mound again in six, Morgan said, emphasizing the time periods were only estimates. But if there's rotator cuff damage, the rehab could extend to 10 months.

Last offseason, Schilling and the Red Sox had disagreed over treatment methods. When Schilling felt discomfort in the shoulder in January, Gill examined him, prescribing rehab rather than surgery. But Morgan wanted to perform surgery then in hopes of saving Schilling's career. Morgan said he thought rehabilitation without surgery would be unsuccessful.

"A lot has changed," Morgan said yesterday. "The conservative approach to his problem that was chosen was very successful in him gaining muscular strength around his shoulder. Both the Red Sox training staff and Curt need to be given credit for accomplishing that goal. The disease in his shoulder precludes him from being able to pitch without pain at this time."

The issue became contentious enough that the Red Sox looked into voiding Schilling's one-year, $8 million contract if he had the surgery. But Schilling chose to follow the path recommended by Gill after a third opinion concurred with the Red Sox' desired approach.

Schilling described his effort level during his throwing sessions as a 3 on a scale of 1 to 10, then said any attempts to move up in effort were bringing his levels of pain from a "1 to 2 to 7 or 8," which was why he was sent back to Boston to see Gill this week.

"He worked hard for a couple months, trying to strengthen his shoulder," general manager Theo Epstein said. "He actually did get stronger, went pretty well through long toss and initially getting up off a mound. When he had to really start to let it go in bullpens, he hurt and he really wasn't able to let it go.

"At this point, it seems like the best alternative is just to go ahead and let him have surgery. This path is not going to get him back on the mound for us this year."

As for a potential return, Schilling is not ruling it out, though he did say he would probably only return near the end of the 2009 season as a boost to a team's playoff run. Saying that he's got "a decent track record after September," alluding to his excellent playoff record, Schilling said he would have to be both pain-free and better than the player he was at the end of last season to attempt a comeback. Even then, it would be after the All-Star break, coming in for a contending team. Epstein said because the extent of the surgery isn't yet known, it was premature to consider whether that team could be the Red Sox.

"Off of surgery, there's two other possibilities, two potentials, which was I could wake up after the surgery and be told, 'You know what, it's been a good run, you've got no shot of getting back out there,' which is something I've . . . had to be OK with because it's a potentially likely scenario," Schilling said. "And the other one is, 'We fixed it but whatever happens between now and when you decide to pitch again, it's going to be five times as much than you ever had to do from a rehabilitation standpoint.' Those are the two surgery results.

Schilling was not at Fenway Park yesterday afternoon, but he did comment on the procedure on his blog, 38pitches.com, calling it "extensive and potentially career-ending surgery." He thanked fans and said he didn't have a "single, solitary thing in any way, shape, or form to be unhappy about."

And over his career, neither did the Red Sox.

"He made a tremendous impact here," Epstein said. "When we were sitting in his living room back in November of 2003, we talked about a lot of things, but among those were him coming here and helping us win a World Series and handling the Boston market and pitching effectively, leading a rotation. I think those things came true, and then some. He certainly lived up to his end of the bargain and it was a very effective marriage while it lasted, that's for sure.

"He left his mark on the organization."