Making his case to stay 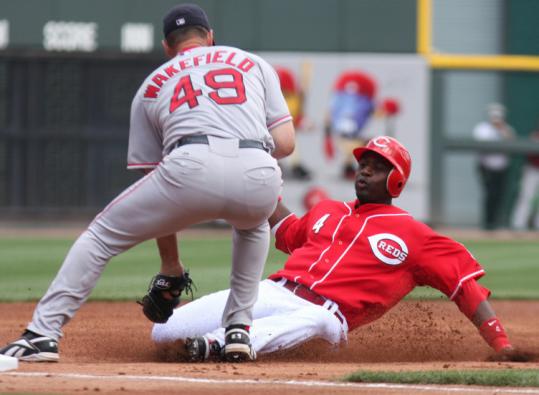 CINCINNATI - He has been exceptional as a temporary solution. So good, in fact, that Justin Masterson is beginning to raise the question of why the Red Sox would want to send him back to the minors.

"He pitched great," manager Terry Francona said of Masterson's latest effort, one in which he struck out nine in 6 2/3 innings of a 3-1 loss to the Reds Friday night, a game in which long balls by Jay Bruce and Adam Dunn beat him. "He continues to impress.

"I don't think we have to map out his future today. That doesn't make a whole lot of sense. Some of that will probably be related to other people's health.

"He's done a good job. We don't want to get around that. He's done a terrific job."

Masterson has made five starts for the Sox, including three straight turns in the rotation. He is 3-1 with a 2.90 ERA. He has struck out 27 batters in 31 innings. Four of his five starts have been quality starts; the Sox have been in every game he has pitched.

Reds manager Dusty Baker was the latest to be impressed: "He had good stuff."

The question is, where do you slot Masterson, with the 8-0 Daisuke Matsuzaka due to return Saturday? The bullpen?

"Why even talk about a kid in June pitching in the bullpen?" Francona said. "That doesn't make sense. A lot of things can happen."

So it appears Masterson, who is scheduled to pitch Wednesday against the Phillies in Philadelphia, will be headed back to the minors - although he may make that decision even tougher with another strong start.

Plane delay
Jason Varitek, who wasn't even on the premises for Friday night's loss after getting stranded in Cleveland because of flight delays, said he expects to play today after missing the last three games with strep throat. Varitek, who was sent home instead of taking the team's charter Thursday night, tried flying commercial the next afternoon. His original flight was canceled because of severe weather en route, and when he tried to make a connection through Cleveland, he was stranded there for nearly seven hours. He didn't arrive in Cincinnati until 11, long after the game was over. "Just a helpless feeling," said Varitek, who said he dozed for much of his layover. "But no 'woe is me.' There are a lot worse things." . . . Manny Ramírez was not in the starting lineup, which was Francona's plan even before the Sox slugger bowed out of Friday night's game in the seventh inning with a tender right hamstring. Ramirez pinch hit in the 10th and struck out . . . Julio Lugo was scratched with an upset stomach. Alex Cora played short and was on base three times, with a double and two walks . . . For only the fourth time in 25 games since the Brewers hit four home runs off Josh Beckett May 18, a Sox starter gave up more than one homer. Tim Wakefield gave up two yesterday (Dunn and Brandon Phillips), just as Masterson gave up two Friday. All four were solo shots.
Quick on his feet
With two stolen bases yesterday, Jacoby Ellsbury tied the Sox rookie record of 31, set by Amby McConnell in 1908 . . . The back-to-back home runs by Kevin Youkilis and Coco Crisp marked the seventh time this season the Sox have hit back-to-backers. Crisp had gone over a month (84 at-bats) since his last home run, May 11 at Minnesota . . . The Sox announced the signing of nine picks from last week's draft, with 12th-rounder Robert McClain, a lefthanded pitcher from Cumberland (Tenn.) University, the highest-drafted player of the bunch. Negotiations are well under way with top pick Casey Kelly, the Sarasota, Fla., star who has a choice between playing quarterback and baseball for the University of Tennessee or playing ball for the Sox.