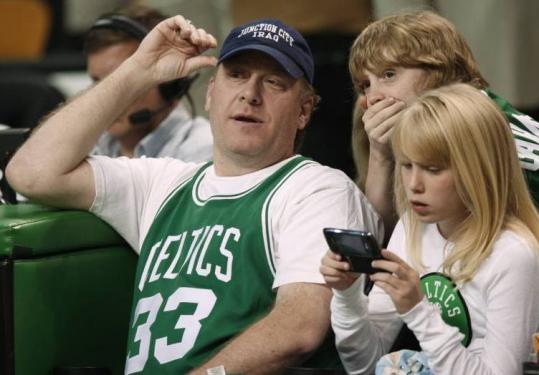 LOS ANGELES - Lakers coach Phil Jackson doesn't have a problem with the way Kobe Bryant tries to motivate his teammates, even if Red Sox pitcher Curt Schilling does.

Never shy about sharing his opinions, Schilling threw a brushback pitch at Bryant on his 38pitches.com blog Monday, the day after the Celtics took a 2-0 lead in the NBA Finals with a 108-102 victory at TD Banknorth Garden, saying he was stunned by how Bryant interacted with his teammates.

Schilling had a front-row seat, right next to the Lakers bench, for Game 2, and he turned it into a pulpit, detailing how Bryant sulked and stalked through the loss.

"I don't really have an opinion one way or the other on or about him other than to know that people feel he might be one of the 4-5 greatest players to ever lace it up," wrote Schilling. "What I do know is what I got to see up close and hear, was unexpected. From the first tip until about 4 minutes left in the game I saw and heard this guy [complain] at his teammates.

"Every [timeout] he came to the bench [upset], and a few of them he went to other guys and yelled about something they weren't doing, or something they did wrong. No dialog about 'hey let's go, let's get after it' or whatever. He spent the better part of 3.5 quarters [ticked] off and ranting at the non-execution or lack of, of his team [sic]."

Schilling, who is on the 60-day disabled list as he attempts to return from shoulder woes, went on to write that Bryant gave "obligatory skin contact" on high fives and sat on the bench "stone faced or [ticked] off" the whole game.

That will happen when your team trails by 24 points, as the Lakers did in the fourth quarter.

When apprised of Schilling's musings last night, prior to Game 3, Jackson called Bryant an "inspiring captain" and defended his star.

"I saw that in the tape and I got some comments from people that saw it," said Jackson. "He poked [Vladimir] Radmanovic on his leg after he made, like, three possessions in a row rather strange.

"That's the type of thing that, as a coach, I'm OK with that. Sometimes Vladi needs even more than that. He needs a dose of reality. I think Kobe does a good job on that.

"After the game, he was very vocal with teammates: 'Hey, let's go back to LA and put it in perspective and win at home and get this thing back [to Boston] to win on the road.' "

Schilling found Bryant's motivational tactics less effective, writing that when Bryant was vituperating teammates, "more than once the person on the other end would roll eyes or give a 'whatever dude' look."

In fairness, Schilling did temper his observations by stating that the interaction could have been normal by NBA standards.

"I am not making this observation in a good or bad way, I have no idea how the guys in the NBA play or do things like this, but I thought it was a fascinating bit of insight for me to watch someone in another sport who is in the position of a team leader and how he interacted with his team and teammates," wrote the hurler/blogger.

It's not unusual for athletes to comment on other athletes, but some might feel Schilling took liberties in using his proximity to the Laker bench to pontificate on private interactions between teammates. It would be the equivalent of a Lakers player who was sitting behind the dugout when Kevin Youkilis and Manny Ramírez got in an altercation blogging details of that dust-up.

Jackson didn't object to Schilling, but did take issue with the NBA for allowing fans to sit so close.

"I've been against the NBA allowing people next to the benches for as long as I've been coaching," said Jackson. "There is absolutely no doubt that those people don't belong there, that they're going to get hurt someday.

"That becomes part of what the NBA is about - being close to the action and close to the scene. We have to suffer the consequences."

One Lakers official who asked not to be quoted said he had no problems with Schilling's comments because they were true, but jokingly took a dig at the hurler, asking what is it about Boston and fake injuries, an allusion to Schilling's famed bloody sock in the 2004 playoffs and Paul Pierce's right knee injury in Game 1 of the Finals.