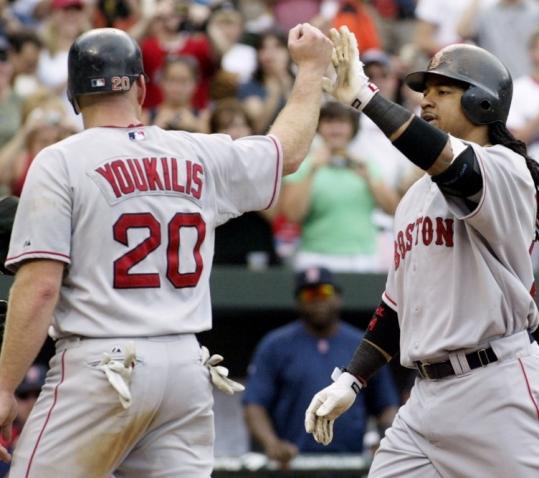 BALTIMORE - A day later, the hits - and the homers - just kept coming.

Manny Ramírez might have taken a rest from his normal spot in left field the afternoon after hitting his 500th homer, but he didn't rest on his laurels. He DH'ed for the Red Sox yesterday and smacked No. 501 on a fastball from lefty Brian Burres to the right-field bleachers with Kevin Youkilis aboard in the fourth inning. He also doubled in another run. Three hits, three RBIs.

It's hard to believe that back in 1995 Ramírez hit seventh for the Indians behind Eddie Murray and Jim Thome, two fellow members of the 500 Club. Also on that team was part-time DH Dave Winfield, who hit 465 career homers, as well as future Hall of Famer Omar Vizquel, not to mention Albert Belle, who hit 50 of his 381 career homers that season.

Not that the lineup Ramírez is in now is chopped liver. The Red Sox have their share of sluggers, too.

Lineup protection or not, Ramírez probably doesn't need it. He hits pitches few others can get to.

"That wasn't even a bad pitch by Burres," said Orioles broadcaster Jim Palmer of Burres's fastball, which was low and on the outside corner. "Manny Ramírez keeps showing why he's one of the greatest hitters of all time. Opposite-field power. He stayed with that pitch and drove it hard the opposite way. There's not much you can do about that if you're a pitcher."

Ramírez had another action-packed day.

In the morning he accepted the 500 ball from Damon and Jason Woo, the Nahant, Mass., natives who gladly gave up the ball Ramírez hit 410 feet into the right-center field bleachers at Camden Yards Saturday night. Ramírez put together a package of memorabilia including signed balls and pictures from him and teammates to thank the Woos for their generosity in giving back the ball and forgoing the chance of selling it. Now Ramírez can sell the ball at auction and contribute to his children's charities.

"Like I said, it's Manny's achievement," said Damon Woo yesterday. Woo said he and his brother Jason baby-sat the ball at their hotel room and took pictures and called friends about the catch. Woo said he got up several times during the night to check on the baseball. He gave it to Ramírez before the game and the Woos stayed for the game - courtesy of the Red Sox - to watch Boston beat Baltimore, 9-4.

"The whole thing was really cool," said Damon Woo. "Meeting all of the players in the locker room . . . hopefully we weren't too much of a pest to them asking them to pose for pictures and sign things. It was just a great thing to be a part of. Like I said, we had talked before the game about the possibility of catching the ball. So it was amazing when I did it."

The Hall of Fame has asked for Ramírez's batting helmet and the lineup card to commemorate the accomplishment. The Red Sox will unveil a video when they return to Fenway Park that contains congratulatory greetings from some of the active 500-homer members including Alex Rodriguez, Ken Griffey Jr., Jim Thome, and Frank Thomas.

Ramírez said he slept like a baby Saturday night. He said he shut off his phone so he didn't know who called to wish him well. But there were people around baseball who did.

"We hit so much that [Ramírez] even took it to next level," Thome told MLB.com in St. Petersburg, Fla., yesterday. "It's great. You look back at your career and to accomplish 500 home runs is remarkable. And to do it with a guy as a teammate, it's really that much more special. Ultimately, you've been a part of it, being there on deck and watching it and feeding off of each other all those years when we were there."

Phillies manager Charlie Manuel knew this day would come. "Not surprised," said Manuel, who managed Ramírez in Cleveland. "I knew he'd do it. He'll get to 600."

"Those are my friends and I played with some those people in Cleveland like Jim Thome and Charlie Manuel was my manager, so they are people I have known for a long time."

Ramírez never has cared what anyone thinks, anyway. He does his thing and backs it up. Yesterday he got doubled off first base on Mike Lowell's long drive to left-center field in the eighth. Ramírez took off on contact, thinking it was going to go for extra bases or out of the park. He guessed wrong. He hurriedly tried to retrace his steps, touching second on his way to first, before getting doubled off.

"I was trying to get Mikey an RBI," said Ramírez. "I made a mistake."

He did that. But Manny shrugged and downplayed it.