Red Sox bullpen is up and down 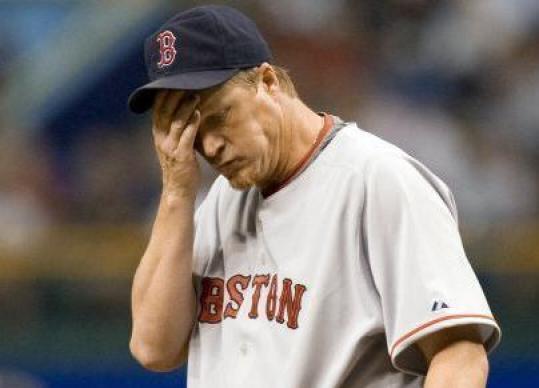 There are the busts (Eric Gagné) and the bargains (Hideki Okajima). And then, somewhere in the middle, are the rest of the relievers, a group unpredictable in front offices from the big markets to the small ones.

"If you were to poll any front-office personnel or those contributing to constructing a major league team, bullpen is always an area that has the greatest fluctuation," said Red Sox pitching coach John Farrell, who spent time in Cleveland's front office. "Whether it is because of usage the year before, injuries have something to do with it, but confidence is also a big part of it. Comes into play when guys have to come in and execute when the game's on the line."

The Red Sox' bullpen situation is like so many others: a mixed bag. There is the notion that it simply is not as good as it was last year, when Sox relievers were the premier bullpen in baseball, helping the team to its World Series title.

It's easy to see in the numbers. Even with a 3.28 ERA over their last 29 games (29 earned runs in 79 2/3 innings), the bullpen only lowered its ERA from 5.42 to 4.33, ranking 11th in the American League. The team is also tied for the league lead in bullpen losses with 10 (though also tied for fourth in the AL in relief wins with eight). The bullpen has blown nine of 25 save chances, Jonathan Papelbon notwithstanding, to rank 10th.

"One thing [manager Terry Francona] doesn't do is he doesn't ride the hot hand," Farrell said. "We try to evenly distribute the workload as much as possible. Now we're also matching up on certain nights to win every game possible. We know there's going to be some variability to the outings that each have."

In last season's World Series run, there were two relievers - outside of Papelbon, who has been nearly automatic the past three seasons - who particularly shined: Okajima and Manny Delcarmen. But that hasn't been the case this season. Okajima has been horrific with inherited runners, allowing 11 of 14 to score, though he has been significantly better with clean innings (witness his 0.82 ERA). Delcarmen has struggled (5.14 ERA), but has been better lately, allowing two earned runs over his last 8 2/3 innings.

The Red Sox also released little-used Julian Tavarez, opening up room for Craig Hansen, a move that should help in the long run. Mike Timlin has been roughed up, citing bad luck. Supporting his claim: He's allowing a .333 batting average on balls in play, which is high, though not remarkable.

"We've run into too many days where we've only [gotten our starters] through five innings," Jason Varitek said. "So we've asked a lot out of those guys at different times, sometimes good, sometimes not so good. We have some [relievers] that are developing, some that maybe had a bad start, and some that haven't done well. But I think the importance is you have a means to an end.

"The [longer] your starters go, the more you can flip-flop them and get your right matchups. Like where you have [Javier Lopez] going against a lefty that struggles with lefties, rather than having to get a full inning's worth of outs because our starter had to be taken out in the fourth. That's a big difference. If you get quality innings out of your starters to get to those guys, you can best put them in the roles that make them most successful."

Although it seems the Red Sox have had to rely on their bullpen more this season, it's not the case. The bullpen has thrown 155 innings through 56 games (helped by Tim Wakefield's complete game Wednesday). In 2007, the bullpen had pitched 151 innings at the same point.

The big difference? The bullpen ERA was 3.08 at this point last season, the best in the AL and second in the majors.

So why isn't that happening this season? Why aren't the performances the same? Why is it so difficult to construct a bullpen?

"I think sometimes guys are in that role because of a reason, whether it's a lack of a consistent secondary pitch," Farrell said. "At times, delivery and repeating it can come and go. Until those things solidify and [the pitcher can add] good old fastball command, that's when a guy starts to emerge into a late-inning guy. The mind-set for a reliever when he's an eighth and ninth guy is pretty clear-cut. They know when their time of game is. For the other guys, it's when the phone rings, they've got to get up and get going and get in the game and execute."