Ramirez is back in the swing of things 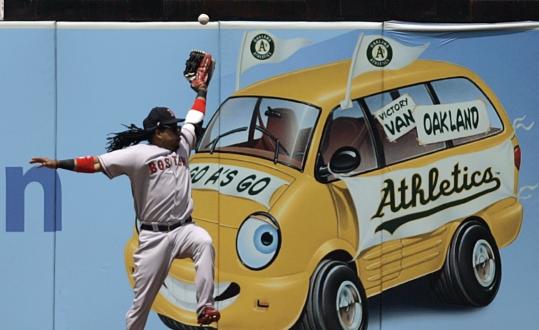 Manny Ramírez was charged with his first error of the season when he botched this third-inning drive. The Red Sox appeared rundown after getting flattened by the A's this weekend. (Ben Margot/Associated Press)
Email|Print|Single Page| Text size – + By Amalie Benjamin Globe Staff / May 26, 2008

OAKLAND, Calif. - Manny Ramírez was not about to reveal any secrets yesterday. After going 3 for 4 (all singles) to break out of his recent slump, the left fielder was not interested in letting reporters in on the adjustments he had made to get back on track.

"I'll let you know in September," he said, smiling.

Ramírez worked in the batting cages with hitting coach Dave Magadan Saturday - he was given the day off by manager Terry Francona - to try to revert to being the Ramírez of April rather than the Ramírez of May. It seemed to have worked, with his singles each going to a different part of the park, left and right and center, all off righthander Joe Blanton.

"I thought Manny swung the bat great," Francona said. "I mean, he hit the ball all over the ballpark. Looked like his balance - we talked yesterday a little bit about getting his head back on the ball. Yeah, I thought it was really good to see. Hard to not play him because he's so good, but I think it probably helped."

"Yeah I've got it back," Ramírez said of his swing. "I'm going to know if I got it back at the end of the year when I check my stats. I don't worry about it."

Ramírez's only miscue on the afternoon came in the third inning when he was assessed his first error of the season. With Jack Hannahan's ball rocketing toward the warning track, Ramirez mishandled it, allowing it to bounce off his glove as he jumped to make the grab. Hannahan ended up on third base, and scored on Mike Sweeney's single for Oakland's second run.

"I thought the ball was not going to travel that far, so I missed it," Ramirez said. "I've got four more months to go [on my Gold Glove]. I'm in good shape. Maybe it's going to cost me playing nine innings."

Though Clay Buchholz pitched for Pawtucket last night in his first rehab start since going on the disabled list with a broken nail on his right middle finger, the team has not yet discussed the righthander's future plans. Because general manager Theo Epstein was off scouting, Francona wanted to wait to communicate the plan for Buchholz.

"Johnny [Farrell] and I sat him down, told him to go pitch, we'll get with you and we'll all kind of get it all figured out," Francona said before Buchholz pitched four innings (plus one batter, who doubled, in the fifth) against Rochester. The starter threw 63 pitches (38 strikes), giving up one run on three hits and two walks. He struck out three in the PawSox' 11-1 win.

But that plan probably won't include a stint in the bullpen, even with the rotation seemingly full (Josh Beckett, Daisuke Matsuzaka, Jon Lester, Tim Wakefield, and Bartolo Colon).

"I just don't think you turn a kid with his potential [into a reliever now], you possibly make him a bullpen guy in May, come back and make him a starter in June," Francona said. "That's not going to work, at least in my opinion. We got into a situation a couple years ago with [converting Jonathan Papelbon to a reliever]. It was late in the year, and that was difficult, and probably not fair to him. Sometimes you get thrown in a situation you don't want to. But I don't know that that's really what we want to do. You ask me if [Buchholz] could do it? Yeah, I know he could."

Jason Varitek started yesterday, even though it was a day game following a night game. Varitek had Thursday and Friday off. But the catcher was also hit in the head by the backswing of Mike Sweeney's bat in the fourth inning Saturday night. "It stunned him," Francona said. Trainer Paul Lessard monitored Varitek all night, but he was judged fine to stay in the game . . . Francona seemed particularly interested to see yesterday's major league debut of 20-year-old Dodgers rookie Clayton Kershaw. The Red Sox saw Kershaw back in spring training, when the then-19-year-old threw a 1-2-3 inning, with one strikeout, March 9 at Vero Beach, Fla. "I was over there working out in Dodgers Stadium on that series [the exhibition one, after the trip to Japan]," Francona said. "I almost pulled him into our clubhouse. Had him around the neck, was going to bring him back with me. He grabbed our attention in that game in Vero. Rarely do you see the whole dugout like going, [Wow]. He throws one pitch, then he throws another one. It's like he had everyone wanting to see what he was going to do. Then you get [Sean Casey], a guy who gets hits off everyone, he walks back to the dugout saying, 'I had no chance.' You don't hear that too often." Kershaw got a no-decision yesterday after giving up two earned runs and five hits and fanning seven in six innings in LA's 4-3 win over St. Louis . . . Because of a sore right calf, Felix Hernandez was pushed back from his start against the Yankees in New York Saturday. He'll get the start tonight against Colon. Hernandez threw a one-hitter against the Sox last season . . . Jed Lowrie, in Pawtucket since he was demoted May 12, has been out since May 16 with an injured left wrist. He hurt it while making a tag in a game against Buffalo . . . David Ortiz's first-inning home run was the 236th of his career as a designated hitter. That broke a tie with Harold Baines for third all-time in the category. Frank Thomas is first, with 268 . . . With the new edict in place to speed up games, the Red Sox played their third straight sub-three hour game. Yesterday's came in at 2:39, the slowest of the series . . . The Red Sox committed three errors, one each by Lester, Ramírez, and Julio Lugo. It was the 12th of the season for the shortstop.