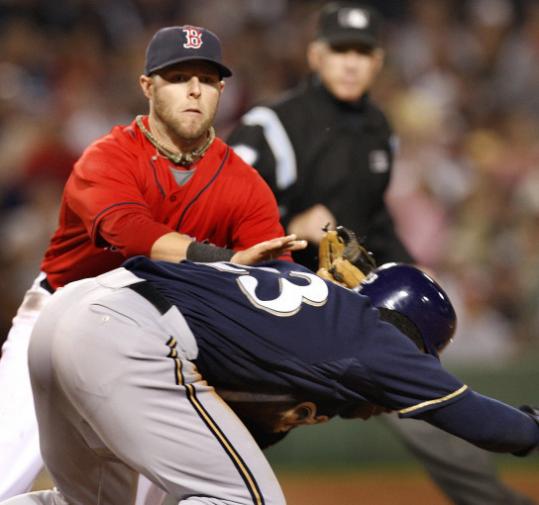 It was a month ago yesterday that Manny Ramirez hit two home runs off Mike Mussina in Yankee Stadium, reinforcing the impression that he'd be joining the 500-homer club sooner than later. In his first 17 games of the season, Ramirez hit five home runs in 67 at-bats, a rate of one per 13.4 at-bats.

The home runs have been much tougher to come by in the last month. After singling once in three at-bats in the Sox' 5-3 win yesterday afternoon, Ramirezhas hit three home runs in 92 at-bats, a rate of one per 30.7 at-bats. His last home run came May 12 at Minnesota off Livan Hernandez.

Ramirez, who did not play in the Sox' 7-6 win in the nightcap, began the homestand needing two home runs to reach 500 and has hit just two of his eight home runs this season at Fenway. He took Mussina deep April 12, and his last home run at home came off Joaquin Benoit of the Rangers April 19, almost a month ago.

Ramirez has professed a breezy indifference to hitting his 500th, though he did ask the Sox PR staff to request that reporters not ask him about the milestone in pregame clubhouse sessions. Another slugger approaching a milestone, Ken Griffey Jr., has stalled since his last home run. Griffey, who has 597 home runs, has gone without a home run in his last 19 games, a span of 73 at-bats.

While Sox manager Terry Francona said yesterday the Sox would "keep a close eye" on Hideki Okajima and monitor his use in the wake of a report that he had a sore left wrist, the reliever's recent usage would suggest the team is not overly concerned, and the results further suggest the injury hasn't been terribly troublesome.

Okajima has been used seven times this month, and overall he is holding batters to a .191 average, with more strikeouts (16) than hits allowed (13). Okajima's only issue has been keeping inherited runners from scoring. Of the 14 runners he has inherited, 11 have scored. He has entered innings with runners on base seven times.

Contrast that percentage to that of the unheralded lefty in the Sox bullpen, Javier Lopez, who has allowed one of 16 inherited runners to score. Lopez also has shown a marked improvement in control; he hadn't walked a batter in 6 1/3 innings over his last seven appearances until walking Prince Fielder in Game 1 - and he is holding lefthanded hitters to a .185 (5 for 27) average. He walked Fielder again in the eighth inning of the nightcap, putting two men on, as it followed his error on Ryan Braun's squibber. But Lopez got Corey Hart to ground into a double play to end the inning.

With Lopez having pitched in both games and the Sox hoping not to use Okajima this afternoon, the team optioned outfielder Jonathan Van Every back to Pawtucket and purchased the contract of Pawtucket righthander Chris Smith to give them bullpen insurance. Mike Timlin pitched a 1-2-3 ninth in Game 2 for his first save since May 2, 2007. Timlin became the oldest pitcher (42 years 68 days) to record a save since John Franco did it for the Mets at 42 years 341 days Aug. 24, 2003.

Compare these players. Both were Rookie of the Year in 2007. Since the start of the '07 season, and going into yesterday's games, one has started more games, has more hits, more doubles, more walks, far fewer strikeouts, far fewer errors (8 to 26), a higher batting average, and a higher on-base percentage than the other. The other has many more home runs (44 to 9) and RBIs (127 to 71), and a much higher slugging percentage (.614 to .431). The first player is paid $575,000. The second just signed an eight-year deal for $45 million, and it could be worth $51 million. The first player is Dustin Pedroia of the Sox; the second is Braun. Like Kevin Youkilis has said, if you want to make money in this game, you hit homers.

Coco Crisp (vertigo) was healthy enough to get the start in center field last night . . . Mike Lowell, 0 for 11 lifetime against Game 1 starter Jeff Suppan, came off the bench while Sean Casey got the start. Casey's 2-for-3 effort against the Brewers starter improved his average to .381 (8 for 21) . . . Curt Schilling is now throwing from 90 feet and remains encouraged by his progress . . . The Sox are holding off announcing their pitching plans against the Royals. Friday's rainout could mean the Sox need starters Tuesday and Wednesday. Bartolo Colon almost certainly will pitch one of those days; the Sox could bring back Tim Wakefield on short rest or bring up David Pauley, perhaps, or Justin Masterson.

Gordon Edes can be reached at edes@globe.com