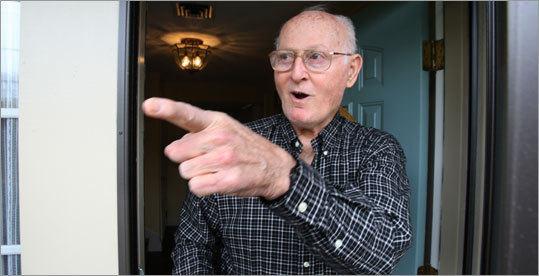 Red Sox Hall of Fame pitcher Bill Monbouquette, stricken with leukemia, is in need of a bone marrow transfer but has been unable to find a match. (Stan Grossfeld / Globe Staff)
Email|Print|Single Page| Text size – + By Stan Grossfeld Globe Staff / May 16, 2008

MEDFORD - Red Sox Hall of Famer Bill Monbouquette has always been accustomed to being challenged. He won 20 games in 1963, pitching on a seventh-place ball club. He pitched a no-hitter. He was named to four All-Star teams. And he once physically threatened a young Carl Yastrzemski, who he thought wasn't hustling.

But at age 71, "Monbo" is facing his biggest challenge.

"It's just another fight, it really is," says Monbouquette, sitting in a rocking chair in his Medford living room. "And I'm looking to win."

Mike Andrews, the Jimmy Fund chairman and former Red Sox second baseman, never played with Monbouquette, but he hit against him. "He was very tough," remembers Andrews. "The ultimate battler. Nobody wanted to mess with him. He was very determined."

Monbouquette has been through six cycles of chemotherapy. He needs a transfusion every three weeks. Ten years ago, there would have been no hope, but he's on trial drugs, and the acute myelogenous leukemia is in remission. That could be the case for two months or 2-3 years, according to his doctors at the Dana-Farber Cancer Institute.

But injections that were working for a year and a half are no longer working. He needs a bone marrow and stem cell transplant, but so far, there has not been a match.

"The doctor says you can't go into a transplant failing," says Monbo, who still looks good and has kept his hair despite chemotherapy. "I go to Tufts to work out four or five times a week and walk the treadmill, but I don't have that kind of stamina anymore. I can only do 15 minutes."

Monbouquette came up with the Sox in late 1958 and played the next seven seasons of an 11-year career in Boston.

In 50 years in professional baseball, he had stints as a pitching coach with the Yankees and Mets, and in the minors with the Tigers and Blue Jays. He was inducted into the Sox' Hall in 2000, and was honored with a 2004 World Series ring. In 2006, he joined Boston's Single A team in Lowell for one night as a coach so he could officially retire as a member of the organization. He'll be at Fenway Park tonight and all weekend at "Autograph Alley" at Fenway Park, greeting fans before the games and reminiscing, as if nothing was wrong.

Born and bred in working-class Medford, Monbouquette still lives there, in a middle-class house on a nice street. He didn't make big money, despite being the Red Sox ace. In fact, he earned in a year about one-10th of what Sox ace Josh Beckett makes per start. Beckett's deal, worth $6 million per year, earns him $200,000 per start, based on 30 starts. Monbouquette's salary was barely $20,000 annually.

And Medford loved him back. After his 1963 no-hitter, the city sent fire engines, lights flashing, to meet the plane at Logan Airport and give him a parade ride home. They named a baseball field in his honor. Tufts University in Medford is hosting a Donor Drive, sponsored by the Dana-Farber Marrow Donor Program, June 7 in his honor. Participants can take a quick cotton-swab cheek test to see if they are a potential match to any of 6,000 people in need of this lifesaving procedure.

Monbouquette says this is not just about him - that the more people who register for the National Bone Marrow Donor Registry, the more lives will be saved, especially children's.

"I don't want to offend anybody," he says. "I don't want to take advantage of anybody. I want to make sure someone else is able to benefit from this. I hope people don't take it that way, because that's not my way at all."

Monbouquette says that as a Red Sox player, he used to go to the Dana-Farber and take a teammate.

Sometimes he went there with Ted Williams, his fishing buddy.

"It was much smaller then," he remembers. "He'd come in there with that booming voice of his and he'd be like a magnet. Ted really loved those kids."

Monbo signed baseballs for the children. "When you're there, you'd think about your kids. When you talk about it, it's a sad thing, and when I see it now . . ."

He stops rocking in his chair, grabs a handkerchief, and wipes his eyes. He's a proud man and a tough man. He composes himself and continues.

"I cry easy," he says, almost apologetically. "It can be a very sad place. But it's also a wonderful place. And I'm going to fight, fight, fight."

Right from Day 1 with the Red Sox he fought. Literally. "I remember when I first signed in 1955," he says. "They put us down the right-field grandstand, way down past the foul pole. I just finished pitching batting practice and joined my mom and dad. A couple of wiseguys down there had been drinking and they spilled some beer on my mother. They were swearing and everything else. And I said, 'Hey, I don't like your language. Enough is enough.' They said, 'Well, what do you think you're going to do about it?' I looked up at my father and he nodded and the next thing I knew, they were taking us out." He was handcuffed behind the back and placed in a holding cell. Johnny Murphy, the minor league director, got them released.

"You know what, we cleaned their clocks, too," he says.

Monbouquette was a workhorse righthander with pinpoint control. He posted a 114-112 record and a 3.68 ERA in 11 seasons (96 wins with the Sox on bad teams) and never made the postseason, despite stints with the Tigers, Yankees, and Giants

He refuses to bad-mouth those weak Sox teams. "What can you do? You go out there and try to battle," he says.

He absolutely hated to be taken out of a game.

Monbouquette remembers the exact date of his no-hitter (one walk) against the Chicago White Sox and Early Wynn.

"It was Aug 1, 1962. I had [Hall of Famer Luis] Aparicio, 0 and 2, and threw him a slider off the plate. He tried to hold up and I thought he went all the way. The umpire, Bill McKinley, called it a ball, and as I was getting the ball back from the catcher, someone shouted from the stands, 'They shot the wrong McKinley.' I had to back off the mound because I had a little chuckle to myself. The next pitch, I threw him another slider and he swung and missed. They say white men can't jump, but I did. It's about the biggest thrill I ever had."

He also motivated an immature, young Yaz, who wasn't running out ground balls and was pouting in the outfield. "He made the comment that 'if that ball goes in the corner, I'm not going to hustle after it.' I said, 'If you don't hustle, you better make sure you have your head up when you come in after the inning's over.' I chased him down and said to him, 'Let me tell you something, pal, they've run better players than you out of this town.' I was the senior guy there. I felt it was my duty to do that. He was mad for a while . . . but, boy, in '67, he couldn't do anything wrong. "

On Sept. 25, 1965, Monbouquette became the answer to a trivia question: Who was the last major league strikeout victim of the great Satchel Paige? The Negro League and major league star was 59 when he was signed to a one-game contract by Charles O. Finley of the Kansas City A's.

He was a players' player.

One time, Mantle invited him to his Make-A-Wish golf tournament in Oklahoma, but the Mick was perplexed that Yogi Berra was a no-show.

" 'I was at a funeral,' Yogi explained. 'And if you don't go to theirs, they won't go to yours,' " says Monbouquette, now rocking and laughing.

Monbouquette has three grown sons from a previous marriage. He met his second wife, Josephine, at his 40th high school reunion, in 1995. They were born two houses apart. They married, went on a cruise to Alaska. They found out they were a perfect match. Life was good. Then the cancer came.

"He didn't even want to take an aspirin," says Josephine.

Monbouquette hates pills. He played in the era of amphetamines. "They were right there in the trainer's room," he remembers. "You could go right in there and take 'em if you wanted to. I never touched 'em. It was in a big candy jar. We didn't think anything of them. From what I understand, they give you a little more energy. I didn't need those. I had more energy . . . I ran and ran. But now . . ."

Monbouquette's voice trails off. He stares beyond the white curtains. "I'd love to hang around to see a grandchild," he says.

Monbo went to Dana-Farber earlier this week. He took a good look around at the children. "It's the little spark in someone's eye," he says. "That's what I like. You have to reach down in your soul and say, 'Thank God,' every day we see them.

"And be thankful and grateful for what you have."