Detractors having a field day with Lugo 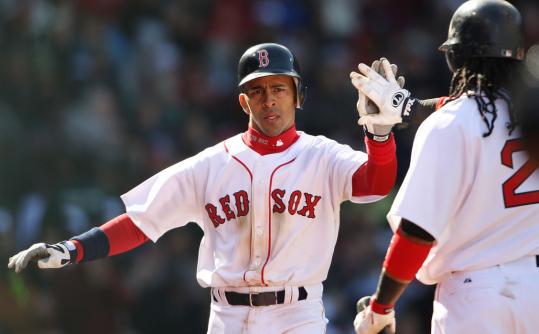 Despite having six errors on the season, Julio Lugo said, "I love to play and I hope that shows." (Elsa/Getty Images)
Email|Print|Single Page| Text size – + By Nick Cafardo Globe Staff / April 18, 2008

From John Valentin to Nomar Garciaparra to Orlando Cabrera to Edgar Renteria to Alex Gonzalez to Julio Lugo - whether Boston devours them, who really knows? All that's known is that Lugo has six of the Red Sox' nine errors. In the second year of a four-year, $36 million deal, Lugo is not a crowd favorite, nor has he been in his tenure with the team.

With young Jed Lowrie around to remind him of the future at the position, Lugo vows to be better. But Wednesday's error infuriated fans. The Yankees' Chad Moeller appeared to go far out of the baseline to break up a double play, forcing Lugo to make a poor throw to first that allowed two runs to score, snapping a 9-9 fifth-inning tie and propelling New York to a 15-9 victory.

"It's a big difference, you know?" said Lugo of the fact interference wasn't called. "The game just slips right in front of you. I argued it, but something was going on. I didn't want to argue too much because [the umpire] was mad at me for some reason.

"Those things shouldn't happen because the play is right in front of you and it's a play you can see. He said it was a clean play, but it wasn't. When I threw the ball, for sure I knew it wasn't going to be a good throw. I kept throwing the ball because I thought they'd call interference right away on that."

Lugo made 19 errors last season. It was considered a decent defensive season because most experts projected Lugo to make about 30, similar to the season Renteria had with Boston in 2005. Sox fans were spoiled by Gonzalez, a vacuum cleaner who made everything look easy and fluid. He had great range, and Sox fans were content with giving up some offense to have someone so graceful playing short. But the Sox had always been enamored of Lugo's offense. The feeling was that in the American League, a shortstop must be a force offensively and defensively - and Theo Epstein decided Lugo would fit.

But things haven't gone so smoothly.

Lugo is streaky in the field and at the plate, hitting .271 with no homers and two RBIs.

While many teams that were interested in Lowrie consider him a second baseman, the Red Sox insists he's a shortstop. Why? Probably because they know if Lugo's game doesn't come around, Lowrie could be his replacement. At the very least, perhaps Lowrie is around as a reminder to Lugo that even though his paycheck is large, there's a kid on the scene who's eager to play.

"I honestly don't even look at my paycheck," said Lugo. "I don't think about the money. I play the game because I love it. I try to bring energy every day.

"I love to play and I hope that shows."

That's always been one of Lugo's major assets. Scouts said he would bring excitement, a love of the game, to the field every day. For the most part, he has. But the errors tend to dampen that mood. The last thing he wants is to be considered a liability, and that's what he hopes to overcome as the season progresses.

He had a tough day in Toronto April 6 in a 7-4 loss when he made three errors. He admits they gnawed at him.

"There were a couple of errors in Toronto I was concerned about," he said. "None of those errors should have happened. It was a lack of concentration. It was one of those things to drop [the ball] and another thing to take too many steps before I threw the ball. The one in Cleveland was a hard-hit ball and I got to it and it just came out of my glove."

Does he consider himself a streaky fielder?

"That's how it is," Lugo said. "I know I'm an aggressive shortstop. I'm going to take chances other shortstops don't take. That's just the way I am. That's my game. I was pleased last year. I thought I did pretty good with reducing my errors. Every shortstop is going to make some errors. There are certain errors you have to try to avoid. The ones on a routine ground ball or something like that, those are the ones you have to avoid."

Infield coach Luis Alicea received a lot of credit last season for changing Lugo's footwork and making his approach simpler. But there's a bit of the freelancer in Lugo that sometimes can't be contained. Alicea feels Lugo's errors are mostly on throws when he doesn't set his feet. It's a constant battle to remind him to do so, but Alicea likes Lugo's game and feels he will settle down.

"He just had that one game [against Toronto] where he had some easy plays and he just threw the ball away," Alicea said. "He made one low throw to first base. [Kevin Youkilis] could have helped him, but it didn't happen.

"[On Wednesday night] he should have held it because the guy was way out of the baseline. It should have been interference and he didn't get the call. All of his errors have pretty much been throwing. On the throws, it's all been with his feet. When he sets his feet, he makes good throws."

Of course, Lugo hates making errors. Nothing bothers him more. He takes them home with him, thinks about them a lot. And he knows people dwell on them.

"People always remember the bad stuff," he said. "Unfortunately, that's how it is. You make a lot more good plays than you make errors, but they always make you remember the errors. And sometimes I make errors because I'm an aggressive shortstop. Another guy wouldn't have thrown the ball there [Wednesday night], but if I make a good throw, we get out of the inning."

Lugo doesn't want to go up in flames. He wants to fulfill his contract and not have to look over his shoulder at Lowrie. But if his game doesn't settle down, that's what he'll be faced with. While the Red Sox can dish out big contracts, they are also capable of cutting their losses.

Lugo doesn't want to be part of such a legacy.