Sox' return home has a nice ring to it 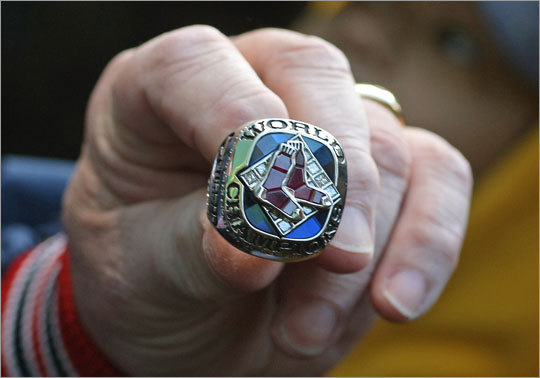 David Ortiz has a ring so big and blocky and shiny that friends assume it's a World Series ring. It's not.

The real thing? He doesn't wear it, except on special occasions.

"I was wearing it one time," he said, "and a fan here in Boston grabbed my hand and almost broke my fingers."

Ortiz is not exaggerating the potential of bodily harm, said Red Sox manager Terry Francona, who rarely wears his ring, either, he said, because it makes him feel too much the showoff.

"When someone shakes your hand, it hurts," Francona said. "It digs into the skin. Someone asked me to wear it once to a speaking engagement where I had to shake a lot of hands afterward, and my hand was killing me."

Manny Ramírez has worn an iPod to left field, but as elegantly as he dresses when the team is on the road, he doesn't choose his Series ring as a fashion accessory. "My wife put it in a safe," he said. "That's it."

John W. Henry, principal owner of the Sox, will be ring master this afternoon at Fenway Park when he and fellow owners Tom Werner and Larry Lucchino present the players with their spoils for winning the 2007 Series. Unlike White Sox owner Jerry Reinsdorf, who commissioned his wife to design the ring after Chicago won in 2005, Henry did it mostly himself, just as he did after the Sox won in 2004. And he is keeping the details a secret.

"There was an early version of the ring that didn't have as many diamonds," Werner said, "but when David Ortiz said, 'There should be more bling,' we agreed."

The Sox didn't skimp when they gave out a record 500 rings for 2004 - a ruby "B" was bedecked with 14 large diamonds, with another five dozen smaller diamonds adding sparkle to the ring face - and the new jewelry promises to be far more precious than the watch fobs, pendants, and medals presented to Sox champions from an earlier time.

"Players like bling," Henry wrote in an e-mail. "And when it comes to World Series rings, they want a lot of bling and they want size. So we are making, as we did three years ago, two sizes of the ring. One isn't wearable by most of us. The other is still quite large. Tim Wakefield was the most active among players in working with us on it.

"Rings continue to grow in size for all sports. But we have opted to downsize somewhat and remain simple. This year we negotiated the amount of bling with David and we compromised.

"Everyone seems very happy with it. We put the trophy on both rings, but this year my daughter gave us the idea of having two trophies on the rings for staff and players who were here in 2004. Sylvia Moon [Henry's special assistant] spearheaded the effort."

The ring won't be as big as the one Mike Lowell and Josh Beckett received when they won with the Florida Marlins in 2003. "A monster," Lowell says of the ring that has 228 diamonds, 13 rubies, and a rare teal diamond for the eye of the Marlin. Lowell has worn it just twice, once when owner Jeffrey Loria invited him to a Miami Heat playoff game.

The Marlins ring was so big, Lowell said ("a small shed," Mike Timlin called it), that he also bought a smaller "everyday" version of the ring.

"I try not to flaunt it," Sox captain Jason Varitek said, "but I try not to be too bashful about it, either. Friends and family want to see it. That's the neatest. When we go to Detroit, I've got a lot of relatives there, and it disappears out of my hands for a while. People take pictures, they say, 'Man, this is heavy.' "

Timlin, who will be receiving his fourth World Series ring this afternoon - he won two with the Blue Jays - carries his '04 ring in his backpack, in a special velvet-lined pocket. He wore it to the cocktail-party reception given to the Sox when they went to Japan.

Before he went to Tokyo, Sox broadcaster Joe Castiglione, acting on the advice of his wife, Jan, changed their wills. Castiglione, who wore the 1986 ALCS championship ring every day for 18 years until he was upgraded in '05, needed to match up his children with which rings they would inherit.

"We set it from oldest to youngest," Castiglione said. "The oldest [son Duke, also a broadcaster] wanted the '86, because Duke remembers crying with his grandfather when we lost Game 6."

Show them the money

While the Sox went 86 years between winning World Series, Sox players had gone more than a century without being awarded a Series ring, even though the team won five world championships between 1903 (the first World Series) and 1918, when Babe Ruth was the winning pitcher in two games against the Cubs.

The first Series winners were awarded watch fobs, and watches to go with them, but that was scant consolation when outraged Sox players learned the losers, the Pirates, actually were awarded $133.66 more per man than the $1,182.34 Boston players received for winning. The gold medals awarded by the Boston Globe were small consolation, too.

The 1912 winners received military-style medals, a pendant went to the 1915 champions, and in 1916 the winners not only got pendants but a diamond-studded miniature gold baseball. More uproar in 1918: Players from both teams, upset about the reduced payout for both winners and losers while the bureaucrats running the game got their full share, delayed the start of Game 5 for an hour in an environment far more hostile than when the current Sox threatened their work stoppage at spring training to protest the lack of pay for coaches going to Japan. Mounted police were sent onto the field to prevent a possible riot, while a drunken American League president Ban Johnson shouted threats at the players, who ultimately decided to play.

Johnson saved his punishment for after the season, informing the Sox that they would not receive the traditional championship emblems. "As a show of thanks that winter," Allan Wood wrote in "1918: Babe Ruth and the World Champion Boston Red Sox," "Harry Frazee presented several of his players with pocket watches engraved with their names and the words 'Red Sox 1918 Champions.' "

A year later, Frazee sold Ruth to the Yankees. History long since has forgotten his goodwill gesture.

Jerry McNeal's business is African pancake tortoises and Szechwan speckled pit vipers and blue-tongued skinks. He's a reptile keeper at the St. Louis Zoo, where he has been working nearly 40 years. He's also the man who knows more about World Series rings than anybody else around, according to Tim Wiles, director of research at the Baseball Hall of Fame.

McNeal can tell you that Lou Gehrig gave his 1936 World Series ring to the doctor who diagnosed him with amyotrophic lateral sclerosis, the neuromuscular disease that would kill him five years later.

Or that Frankie Crosetti, who was a teammate of Gehrig's on the Yankees and later became a Yankee coach, was part of 17 World Series winners but has just one ring, because he elected other forms of swag instead, including five shotguns ("I like to hunt"), pocket watches, a trophy, and on one occasion, cash ($100).

Or that Gene Conley, who won an NBA championship with the Celtics and a World Series with the Yankees, is the only player with a ring from both sports. Or that when former pitcher Gene Brabender, a rookie on the 1966 Orioles championship team, fell upon hard times, filed for bankruptcy, and the bank foreclosed on the ring, someone anonymously bought the ring and sent it back to him.

McNeal said his fascination with Series rings began when he saw one on sale in a St. Louis pawn shop; the owner had been in the Cardinals front office when St. Louis won in '67, but because he and his wife were childless, she decided to sell it after he died. McNeal didn't buy the ring, but it sparked his curiosity, and when he discovered there had been little published on the subject, he decided he would become keeper of the lore of the rings.

McNeal said the earliest evidence of a Series ring he has is a blurred photograph from 1908, when the Cubs won the World Series. That's also the last time the Cubs won the World Series. That was also the year that Charles Murphy, owner of the Cubs, ticked off fans by selling Series tickets to speculators and infuriated out-of-town sportswriters by seating them in the back row of the grandstand. As a result, the writers organized into the Baseball Writers Association of America. Cubs fans, meanwhile, continue to find solace in the many bars surrounding Wrigley Field.

For McNeal, the coolest of the early rings - the practice of awarding rings to the winners became common in 1931, he said - were those awarded to the Cardinals for the 1926 Series. It wasn't so much the ring itself but the man who presented it to them in Sportsman's Park that spring of 1927: Charles Lindbergh, who had just made history's first transatlantic flight.

"He was the most famous man on the planet," McNeal said, "but because some St. Louis businesses had helped sponsor his flight - that's why his plane was known as the Spirit of St. Louis - he was willing to come to give out the rings."

Dr. Charles Steinberg, the maestro of pregame ceremonies during his tenure with the Red Sox, is now with the Dodgers, and clearly hasn't lost his touch. Just in the last 10 days, Steinberg presided over the largest crowd ever to watch a baseball game, 115,300 in the Los Angeles Memorial Coliseum, and gave Dodger Stadium the kind of chills it rarely has known on Opening Day when he brought a half-century of great Dodgers back for the team's 50th anniversary in LA, climaxing with a rare appearance by Sandy Koufax, who threw out a ceremonial first pitch with fellow Hall of Famer Don Newcombe and Dodger mainstay Carl Erskine.

Steinberg's successor with the Sox, Sarah McKenna, is a native of Springfield, Mass., and a graduate of Providence College who has worked alongside Steinberg with both the Padres and Sox.

McKenna has some additional hands-on experience that the celebrated dentist can't match: She was Rocky Raccoon, mascot for the minor-league Portland (Ore.) Rockies, as part of her first job in the business.

But there was a reason McKenna had nearly 200 volunteers on the field Sunday afternoon, putting them through their paces for this afternoon's ceremony while the Boston Symphony Orchestra rehearsed music rescored just for the occasion.

"That might have been the first one," she said, "but that doesn't make this one any less special, or unique."

Ramírez may not flash his ring, but seared in his memory is the moment when he walked out to Henry and received his.

"One of the greatest feelings in the world," he said. "I can't even explain it. Makes you hungry to get another one."

Henry regularly wears a smaller version of the '04 ring, and there is no doubt he will wear this one, too.

"I wear it," he wrote, "because this is really what you get into the game of baseball for - to win a World Series ring."

Gordon Edes can be reached at edes@globe.com