THIS STORY HAS BEEN FORMATTED FOR EASY PRINTING
Fenway opener 2008 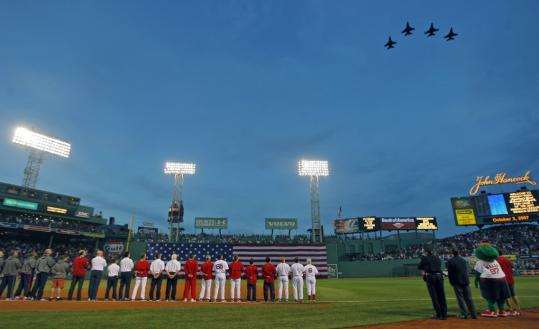 When Lieutenant Colonel Dave Smith leads a squadron of four F-16s from Burlington, Vt., to Fenway Park this afternoon, the fighters will circle over Cambridge, dropping to 1,000 feet and screaming over the baseball field at about 350 miles per hour as the final note of the national anthem ends.

The round-trip journey, which will cost taxpayers about $100,000 for fuel alone, has become as much of a tradition as the ceremonial pitch on Opening Day.

In fact, it can seem there's hardly an event without a flyover these days. The roar of jet engines is heard at everything from Major League Baseball games to NASCAR races to town fairs and community parades. With requests for flyovers rocketing nationwide - to 3,623 last year, a 37 percent jump from the previous year - the Air Force says it is cutting back.

Instead of providing flyovers at 108 NASCAR races, as they did four years ago, Air Force officials this year approved 38. Some National Football League teams used to have flyovers at every home game; now they're lim ited to four flyovers a season. And Major League Baseball teams are also now limited to four flyovers a year: for the season opener, the first games of the playoffs, and the World Series.

"The large increase in the number of requests has made it more difficult to consistently support the many different kinds of eligible events for flyovers," said Pamela Friend, a spokeswoman for the aviation support program in the Air Force, which no longer allows flyovers at high schools and elementary schools, nonmilitary graduation ceremonies, and other events deemed unlikely to boost recruitment.

The number of flyover requests has risen as the price of jet fuel soars and the military struggles to cope with the wars in Iraq and Afghanistan. The Air Force this year had to cut its training hours by 10 percent.

Friend and others said the ubiquity of flyovers led more people to request them. "Flyovers are being broadcasted on television, newspapers are writing about them, and towns are watching what others with similar events are doing," Friend said.

Red Sox officials said they have sought flyovers for every season opener since 2002, after new ownership took over and the attacks on Sept. 11 sparked a national surge of patriotism. Last year, the team had flyovers in the opening playoff games and at the opening game of the World Series.

"It energizes the crowd and thrills our players," Sarah McKenna, a Red Sox vice president for fan services and entertainment, said in a statement. "The inclusion of a flyover during the celebration of some of the Red Sox's greatest moments also provides our fans and us with an opportunity to appropriately salute our men and women in uniform."

There's another benefit for the Red Sox and others who request flyovers: Taxpayers pick up the tab.

The Air Force accounts for the flyovers as training missions and says they benefit recruitment efforts. In return for flyovers, recruiters usually get a place at events to set up a table and distribute literature.

"We don't just do a fly-by and call it a day," said Lieutenant Colonel Lloyd Goodrow, a spokesman for the Vermont Air National Guard's 158th fighter wing, which will fly over Fenway today. "We have an extensive training plan during the day. The pilots have in-air training objectives. We don't just generate flights for flyovers."

Goodrow said his wing has an edge, because its fighters did the flyovers in 2004 and 2007, when the Red Sox won the World Series. Aside from bragging rights and media exposure, there's another perk: The pilots, who land at Hanscom Air Force Base after the flyover, are escorted back to Fenway to watch the game.

For Smith, a lifelong Red Sox fan, the flyover is an honor.

"Being able to represent our military in the opening game is pretty awesome," he said.

He isn't concerned that the journey from Burlington to Boston will cost about $32,000 an hour in fuel and requires special arrangements with the Federal Aviation Administration. He said the money is being spent on training, and he compared the flyover to a bombing mission.

For the flyover to succeed, to come just as the national anthem ends, he and his pilots have a window of about three seconds.

They must rely on a military ground controller inside Fenway, who will radio them when the anthem starts. Then they will set their "Time Over Target" computers for 80 seconds, the normal length of the anthem, descend from about 10,000 feet over the Cambridge area, and fly in at half the speed of sound.

"The pressure of hitting a window like this is more than in combat, because you have to be perfect," Smith said. "We can't be too late or too early."