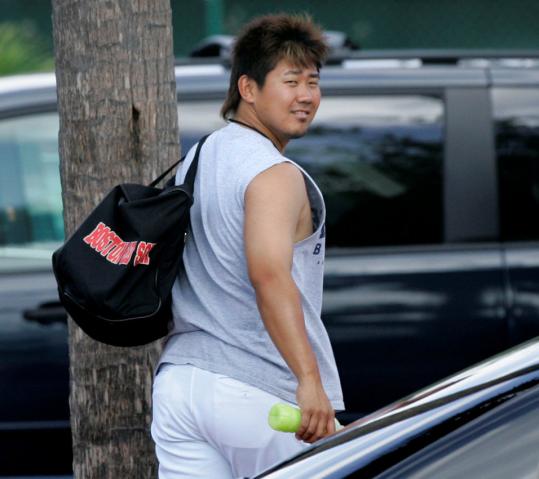 FORT MYERS, Fla. - The Red Sox punted on Daisuke Matsuzaka, and they're glad they did.

In yesterday's chaos, with the exhibition game against the Blue Jays in jeopardy because of a dispute between the Red Sox and Major League Baseball over coaches' compensation for the Japan trip, Terry Francona asked Matsuzaka to pitch in the Triple A game vs. Rochester to ensure he got his work in.

Matsuzaka threw 78 pitches and lasted six innings, striking out eight. Jason Varitek went to catch him while the Sox were losing to the Blue Jays, 4-3, at City of Palms Park following a 1-hour-6-minute delay while the Sox were solving the dispute.

"This was a great opportunity for Daisuke to go down and pitch in a little bit more relaxed atmosphere," said pitching coach John Farrell. "I thought he repeated his delivery well, probably the best command of the baseball that he had all spring. Again, we're seeing the uptick in the velocity a little bit, he's at 90, 91, which is on the higher end of the range that he's shown all spring, but a chance that he could go out and get up and down six times . . . allows him to be in a good spot for making the Opening Day start."

Matsuzaka was not willing to speak to the media after the game.

Theo Epstein said he won't be making any deals during the 17-hour flight to Japan. "Nothing on the horizon," he said . . . Coco Crisp went 1 for 2 in his first major league game since suffering a groin injury March 2. Crisp has played in minor league games but yesterday he played center field and had four putouts. "I felt good," said Crisp. "I think I can play nine innings if I had to. I'm not restricted in any way." . . . Dave Aardsma was the last-minute starter for Boston after Matsuzaka was asked to pitch in the Triple A game. Aardsma went two innings and allowed two hits. Bryan Corey continued to impress with two more scoreless innings and could work his way onto the team . . . At one point after he threw a pitch in the ninth, Jonathan Papelbon shook his arm, but when asked if he had discomfort, he said, "Nah, I'm fine." . . . Mike Timlin pitched an inning, and as he was about to board the bus for the trip to the airport, he had a white bandage on his right middle finger. No word if there's an injury . . . The Sox had to weigh about 135 suitcases before they put them on the van for the airport . . . Francona on Brandon Moss: "He looks like a typical young player who's getting familiar with his surroundings. A lot more confident than he was two years ago. He doesn't miss many fastballs." Francona said he was very comfortable with all the at-bats most of the hitters got in camp . . . Jon Lester, the likely starter for the second game in Japan, will throw in a game at the minor league complex today, then fly to Japan . . . Bench coach Brad Mills said of the resolution of the coaches being compensated for the Japan trip: "I think in the end, the right thing was done. I'm happy for all the guys, all the coaches. We appreciated the support of the players."