Harvard product Farkes, a novice catcher, is eating up his experience in Red Sox camp 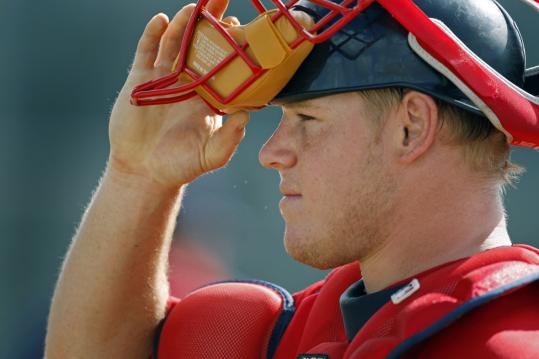 FORT MYERS, Fla. - They made quite the procession as they departed a posh local steakhouse in single file a couple of nights ago. Jason Varitek was at the head of the line, his personal assistant and trainer, Leslie Eddins, brought up the rear, and in between were a dozen or so catchers from every level of the Red Sox organization: the rostered veterans, the nonroster invitees, and every kid from the minors who has put on shinguards and chest protector to help in big league camp this spring.

This was Varitek's treat, something he has done quietly for the last five or six years, and it begged this question: At an Unmaskederade Ball, what do catchers talk about?

"It's not really what they talk about," said Zak Farkes, who was making his first appearance at a Varitek soiree. "It's what Doug Mirabelli wants to talk about. It was pretty much Dougie telling stories, trying to bait Jason into talking a bit, but mostly him running the show, holding court."

Mirabelli, at 37 the oldest of the invited guests, also did not miss an opportunity, Farkes said, to remind Varitek who was picking up the tab for the night. But in the midst of the Mirabelli monologues, and the lightening of Varitek's wallet, there was no missing the purpose of the night.

"It's seeing that leadership, and how it filters down, why catchers in this organization pride themselves on the work they do," Farkes said. "You spend time with Varitek and Mirabelli, you see how they carry themselves on and off the field - the professionalism, the love of the game, the will to compete at all times.

"When you come up from the minor leagues, your adrenaline is going, you're willing to work as hard as possible, and then you look to your right and you see Jason Varitek working just as hard as you, like he's trying to win a roster spot, it's inspiring to watch him work. And the dinner, where he is so generous to us, that's just another part of who he is as a person and a player. It really sets an example for all of us."

Farkes is a newcomer to the catching trade, but anything but a novice to what it means to wear a Red Sox uniform. He grew up on Beacon Street in the Back Bay, so close to Fenway Park that he could hear the cheers of the crowd coming through the window before the same tape-delayed cheers played on his TV set. His dad, Gary, who runs his own chemical and pharmaceutical company, and his mom, Renee Duchainey-Farkes, the principal of the Kingsley Montessori School, had a pair of season tickets, Section 16 along the first base line, and Zak and his three brothers, Josh, Adam, and Alex, often walked to the ballpark to see the Sox play.

The career path to the big leagues usually does not pass through the prestigious prep school Farkes attended, Buckingham Browne and Nichols, nor through Harvard, where he was recruited by coach Joe Walsh. Farkes was the Ivy League Rookie of the Year as a freshman and led the league in home runs and was named to the All-Ivy team as a utility player as a sophomore. Because he'd turned 21, he was eligible for baseball's amateur draft.

He was picked by the Red Sox, but not until the 39th round, and when he hurt his shoulder in the Cape Cod League, he held off on signing, underwent surgery to repair a torn labrum, and returned to Harvard for his junior year.

That decision helped advance him toward his degree in English and American literature (no Sox player has a bigger collection of Ayn Rand's writings), but it did nothing for his baseball prospects. He wasn't drafted after his junior season, and wound up signing with the Sox as a nondrafted free agent for a $2,000 bonus.

A year later, at the end of spring training, the Sox asked him if he'd be willing to switch to catching from third base, where he'd been playing. "They told me, 'We'd like you to give it a shot,' " Farkes said.

Why? "I guess my makeup as a player, my body type, my intelligence, my hard work - that all fit, I guess, with the type of catcher this organization wants to develop," he said. "They wanted to see if I fit in that mold."

It remains a work in progress. Last year marked Farkes's first full season as a catcher. He began with Single A Greenville, under Gabe Kapler, then was promoted to Lancaster in the high A California League.

He was on a layover in Dallas when ESPN's "SportsCenter" came on, and the announcer said the Lancaster JetHawks had lost, 30-0, one of the worst losses in baseball history.

"I'm thinking, that can't be the same team," Farkes said.

It was. Lancaster, playing in gale-force winds in the high desert of southern California, had pinball scores on many nights. In his first game there behind the plate, the JetHawks lost, 26-12.

But just as promising pitchers like Justin Masterson and Michael Bowden learned to survive by keeping the ball down in the zone, so, too, did Farkes learn to catch. And he took advantage of the favorable conditions to put up some numbers at the plate. In 40 games, he batted .275 with 10 home runs and 33 RBIs.

So now he is here, three months short of his 25th birthday (May 30), having dinner with Jason Varitek and Doug Mirabelli, taking part in drills alongside them, watching and learning.

Where does this catching odyssey end? Perhaps there is a clue in this: Inspired by the Greek poet Homer, Gary Farkes gave his son the middle name Ulysses, the same name he gave his company.

"That is his favorite story in mythology," Zak Farkes said. "The idea of using your head and mind to get past whatever your challenges were, to combine your strength and athleticism and intelligence. He thought that was very admirable."

Farkes looks, too, to Rand, his favorite author. "Seizing the moment," he said, "and applying it to baseball has really worked for me."