Henry arrives, walks right into it 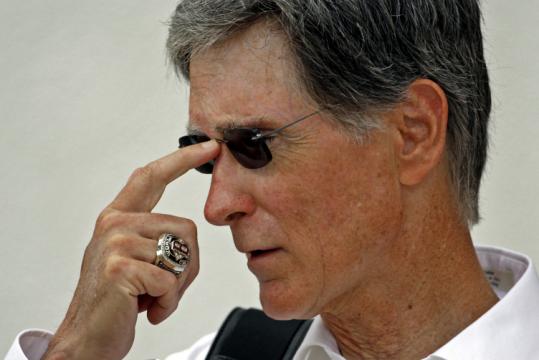 Boston's Camp Tranquility, home of the defending world champions, took a trip back to the wacky Winter Haven world yesterday when Sox owner John Henry arrived at camp and learned that the Schill Spring Standoff had taken an ugly turn.

Late in the morning, Curt Schilling handpicked some media members ("FOS," Friends of Schill) to speak with in front of the minor league complex while Red Sox pitchers and catchers went through their workouts on the fields out back. Silent until yesterday, Schill elaborated on his medical war with the front office (Schilling wants shoulder surgery; the Sox say no), saying, "I may never pitch again," and reminded all that he doesn't want to be a distraction.

Schilling was already long gone and manager Terry Francona was starting his daily post-workout press conference when a hatless Henry emerged from the clubhouse for the first time this spring.

"Mr. Schilling finally opened up, I understand," said the owner.

Is he angry with the team? I asked.

Does he have any reason to be angry with the team?

Why not let him go ahead and have his shoulder surgery?

"Actually, these are better questions for [GM] Theo [Epstein]. I really haven't been involved. Those are medical issues."

Was signing Schilling to an $8 million contract a bad business decision?

"No, I think at the time you make these decisions . . . I think it's best I not go into the whole thing . . . That is only a small part of the overall check that's written. It's a significant part, but pitching's expensive these days."

Paying someone not to pitch is expensive, too. Is Henry unhappy with his medical team, which put Schilling through a physical and an MRI before the deal was finalized in November?

But Schill seems to be mad at the ball club.

"Because we won't let him have the surgery? Is that what he said today? I haven't talked to him."

Changing the subject to more pleasant topics, I asked the owner how he felt about the state of his team.

"It's hard to believe this is going to be our seventh season," he started. "It shows you how old we are. Six years isn't really a lot of time in our lives. I'm very pleased with things. We've got the right team in place from top to bottom.

"I couldn't be happier. How could I - coming off a World Series championship, everyone coming back, staff as well as the team. It feels better than 2005. We didn't really have any big needs in this offseason. So there wasn't a lot to be done."

Any regrets about not trading for Johan Santana?

"No. We participated to the extent we were willing. Anything beyond that wouldn't have made sense for us. We have a tendency to say 'no' on a lot of things. That's been one of our great strengths. Imagine if we had kept that 2004 team together?

"We had to say 'no' a lot of times when it was not easy for Theo to do so. Would we have loved to have had another No. 1 pitcher? Absolutely. But the costs were too high."

Which, unfortunately, brings us back to the big lug. Schilling's doctor, Craig Morgan, stated that the club's rehab plan has a "zero percent" chance of success.

"I didn't appreciate that," said Henry. "That's what you call a 'nocebo.' It's the opposite of placebo. Usually, part of a doctor's way of dealing with patients is . . . We all know the placebo effect is a huge effect. So giving your patient a 'nocebo effect,' to me that's irresponsible."

Any plans to talk to Curt?

"About this? It's a medical issue."

But you have to admit the whole situation is a little awkward.

"Sometimes there are things that are awkward," said the owner. "You can't avoid them. It's really awkward talking with you."

Can't argue with that one.