A chance to get a big hit at Fenway 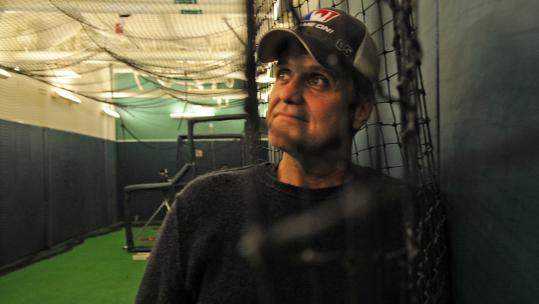 The batter steps up to the plate, knees bent, eyes squinted. Whoosh! He whiffs on the first ball, connects on a couple, and then smacks one to the left wall. "That," he announces, "was a home run."

Boston restaurant and club owner Patrick Lyons is hardly Big Papi, but he is relishing his first time in the visitors' batting cage in the basement of Fenway Park. He has just stepped through a door from his Fenway eatery Game On! and entered the indoor cage, which is all artificial turf, padded mats, and black netting. "It's exhilarating," says Lyons, 55, who played sandlot ball as a child.

For the first time at Fenway, fans will be able to enter the visiting team's batting cage and take swings in the same practice area used by the likes of Derek Jeter and Miguel Tejada. Lyons and the Red Sox say they aren't aware of any other Major League Baseball team with such an arrangement.

Naturally this will all occur when the Sox aren't at Fenway, and naturally it will cost, starting at $50 to $75 per head. Here's how it works: You book a party of at least 20 people - birthday, corporate, bachelor, whatever - at Game On!, which is on Fenway prop erty but outside the gates. The package includes food, the batting cage - complete with bats, helmets, and a pitching machine - and cheers and jeers from your friends, who can watch through a huge one-way window in the basement bar.

The Red Sox and Lyons, who leases the restaurant space from the team, say they hope the experience will attract more year-round traffic to the Fenway area.

"It gives fans an opportunity to creatively use that space when it's not being used by the visiting team," says Jonathan Gilula, vice president of business operations for the Red Sox. "It's the first time in Red Sox history we've done anything like this."

There's another novel plan in the works: When the Sox are at Fenway, restaurant patrons will be able to watch - free of charge - the visiting team take batting practice through that huge window in the bar, which is now covered by a NASCAR mural. Lyons hopes to have the window ready by opening day on April 8.

"As soon as that mural comes down, you will be able to sit here and see the visiting team practice," says Lindsay Curtis, marketing manager for the Lyons Group. "They're in there an hour and a half before each game."

Security will be stationed at the window, says Curtis, to prevent Red Sox fans from indulging in unseemly behavior that might disrupt the visiting batters. Because of the one-way glass, the visitors won't know they're being watched. Still, she says, Red Sox officials may ask each team if it minds the invisible spectators.

"It has to not distract the other team," Curtis says. "We have to make sure there's no glare or reflection, and that fans aren't distracting them. If Johnny Damon's in there, we could have some anxious Red Sox fans."