Oldest ex-major leaguer has 99 years under his belt and scores of tales about Ruth, Foxx, and other immortals 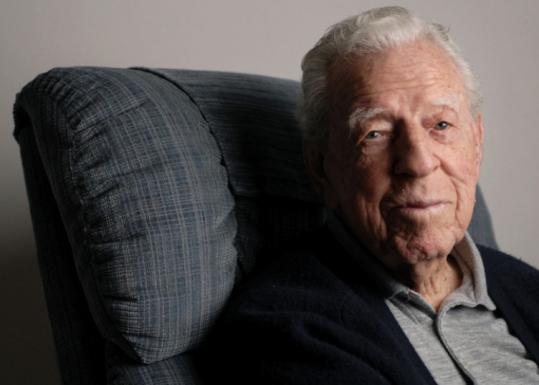 CHARLOTTE, N.C. - "So, what prompted you to take an airplane and come down here?" Bill Werber asks his visitor in the dining room of the Carriage Club, where he'd passed on the lunch buffet and asked Joe, the chef, to prepare a hot dog with onions for him to go with his cup of soup.

"I guess you had some motive in mind," he says. "Where do you hope to sell it?"

The words are not said disagreeably. Nor are they private. His Southern drawl wafts over to neighboring tables in the assisted-care facility, and so does the answer of his guest, admonished by Werber earlier that morning that even with his hearing aid, he'd need to speak up, if he expected Werber to respond to his questions about Babe Ruth and Lefty Grove, Lou Gehrig and Jimmie Foxx, men he knew because he played ball with all of them.

Soon enough, a woman whose tilted head betrays her interest ambles over next to Werber's wheelchair and places her hand on his.

"Bill, my darling, where's your hot dog?" she asks.

"Don't let them cheat you," she coos. "You're looking well, my buddy. And you've got the story of a lifetime. A great story. Take care, darlin'. "

Werber waits until he is sure she has left the room.

The hot dog arrives and he tells another story, this one about the Babe and an unsuspecting Yankees teammate named Ed Wells, a lefthanded pitcher who succumbed to Ruth's insistence that he accompany him on a double date with a couple of women he knew in Detroit. You bring the gin, Ruth told Wells. I'll bring the bag of oranges for the mixer.

They arrive at the house for the promised rendezvous, but when the door opens, they are greeted by a highly agitated man, who accuses Ruth of two-timing him, points a gun at the Babe, and fires. "I've been shot," Ruth gasps to Wells. "Run, run for your life."

Wells bolts down the street. Shaken, he makes his way back to the team hotel - "the Book-Cadillac," Werber recalls - where his Yankees teammates were waiting.

"They told him Ruth was asking for him," Werber says. "They got Babe up in his room, stretched out on the bed, talcum powder on his face and ketchup on his chest. 'Babe is dying,' they told Wells. He passed out, right there."

Werber chuckles. "They pulled that one on a number of people."

A waitress hovers. Werber had called her Regina, and was startled when she showed him her name tag, which reads "Orolean." "Want me to take your plate, sweetie?" she says.

Lunch is almost over.

"We lived, Dusty Cooke and I, at the Sheraton overlooking the river when I was with the Red Sox - what was the name of that river?" Werber says. "The Charles? We tipped the telephone operator. She'd cut us in on telephone conversations that [Red Sox outfielder] Mel Almada would have with lady friends, and we'd accost him with information that rather surprised him at the ballpark."

Werber mentions his son, Bill Jr., is having a birthday that day. Bill Jr. has just turned 77.

He pushes his wheelchair away from the table. "Let's go back," he says.

He is sitting in another wheelchair, the one he uses when he is in his apartment, where earlier that morning, one of his daughters, Patricia, had stopped by to prepare his breakfast. Werber never made more than $13,500 in a season as a ballplayer, but after following his father into the life insurance business when his playing days were over, he retired a millionaire, living in Naples, Fla., for 28 years before relocating to Charlotte to be close to Patricia.

"I'm the oldest living player," he says. "I have been for some time. Chances are good that I'll live to be 100. My birthday is the 20th day of June. A little over five months, I'll be 100. I retain all my faculties. My memory's good. My health is good. Some people say my memory is amazing."

Bill Werber, born in Berwyn, Md., in 1908, played in the big leagues for 11 years, including 111 games with Ruth's Yankees and three seasons with the Red Sox, 1934-36. A third baseman, he led the big leagues in stolen bases twice and tied for the league lead a third time. When Cincinnati won the World Series in 1940, he led the team with a .370 average as the Reds beat the Tigers in seven games. The year before, he was the first big leaguer to bat in a televised game - Aug. 26, 1939 - when he led off against the Brooklyn Dodgers in Ebbets Field, with Red Barber behind the mike and two cameras showing the action for W2XBS, which would one day become WNBC-TV.

Two years ago, Silas Simmons, who played in the Negro leagues and was recognized as the longest-living professional baseball player, died at age 111. Emilio Navarro, the first Puerto Rican to play in the Negro leagues, is 102 and believed to be the oldest living pro ballplayer. Last July 22, Rollie Stiles, a righthanded pitcher who won nine games over three years with the St. Louis Browns, died in his sleep. He was 100.

Bill Werber, 99, thus became the man believed to be the oldest living ex-major leaguer, 16 months older than an infielder named Tony Malinosky, who played 35 games for the Dodgers in 1937. He already held the distinction of being the first All-American basketball player at Duke. "I shot whenever I got my hands on the ball," he says. A copy of Duke's basketball schedule is on his kitchen table. He'll stretch his usual bedtime of 9 o'clock, he says, to watch the Blue Devils on TV.

"Baseball? I don't watch it at all," he says. "I watched a part of the Boston World Series four years ago, and I saw that Johnny Damon with the long hair and beard. I wrote . . . what's the name of the commissioner? I wrote Mr. Selig a letter and I told him something ought to be done. I've written Mr. Selig a number of letters. I have copies in my file. He always responds, but he never says anything."

There are no baseball photos adorning Werber's apartment. He had a rec room in his old house but has given most everything away; Patricia kept some of his mementos. The framed photographs are of family members, including his wife, Kathyrn - "Tat" - whom he lost eight years ago.

Werber has stories, and on this January day, he is skipping his usual morning nap to share his memories.

"Babe was in a class by himself," Werber says. "I remember one day in the dugout, Babe hit a home run, and Earle Combs, who was our leadoff hitter and was on base, asked him on the bench, 'What'd you hit, Babe?' I was sitting near enough to hear the conversation.

"His response was, 'I don't know what I hit, but it sure went out of here, didn't it? The trouble with most you guys, you're always up there guessin'. You're guessin' whether you'll get a fastball, a changeup, a curve, a screwball, a spitball. When I go up there to hit, I don't think about nothing, and that's the truth.' "

Hall of Fame names sprinkle the stories. He became such good friends with Frank "Home Run" Baker, who preceded him in the big leagues, that he was asked to serve as a pallbearer when Baker died. Ted Williams was a rookie when they first met, and they, too, became friends later, through a mutual friend, Dick Locker, who served with Williams as a Marine pilot in Korea.

The best ballplayer he ever saw, he says, was Foxx, the slugging first baseman who surprised him one day by beating him in a 100-yard dash when they were both playing with Boston.

"I heard [Rogers] Hornsby giving a lecture on hitting, on a train ride going out of Boston to St. Louis, a long ride," he says. "Hornsby was a pretty good talker, and a pretty good hitter. He didn't even read the newspaper, he didn't want to hurt his eyes."

Scout Ira Thomas told him of signing Grove, the Hall of Fame lefthander who would be apt to get up and go to his room if you deigned to sit next to him in a hotel lobby. Thomas, told by Grove's mother that her son was due back soon from squirrel hunting, soon enough encountered the pitcher, squirrel tails tied to his belt. Thomas noticed Grove didn't have a gun. How'd you bag the squirrels, he asked. With rocks, said Grove, who reached into his pocket with his right hand, emerged with a rock, and fired it at a transformer hanging from a railroad crossbar, shattering it. I thought you were lefthanded, Thomas said.

Grove used to kick at the water bucket on the dugout floor when he was angry, Werber says, prompting the Sox trainer, Doc Woods, to employ a sturdy oak bucket, which he reinforced with steel bands, so that teammates wouldn't get splashed with water every time Grove was mad.

What Werber never noticed was that Grove always remembered to kick the bucket with the side of his foot. One day an agitated Werber let out his frustrations by booting the bucket with a direct hit, with dire consequences. He hurt his toe so badly that he required surgery to shave a calcium block and remove a bone spur that had formed on the toe, and while he played another seven seasons, it never ceased to bother him.

"I paid a very strict price for a stupid drop-kick of a water bucket."

One of Werber's favorite stories is about the time he stole home with runners on the corners because the opposing first baseman, Zeke Bonura, had a habit of patting his glove and making a slow lob back to the pitcher when the pitcher threw over. Bonura's manager, Jimmie Dykes, fined him for his carelessness, and Bonura was waiting the next time Werber walked past.

"He grabbed me and squeezed me," Werber says. "I thought he was going to crack my ribs. I wasn't a match for Zeke Bonura.

Werber rolls up his left pant leg to reveal he has a prosthetic device below his knee.

"I lost a leg to diabetes," he says. "They cut it off right here. That was about six, seven years ago. I had a blister on my middle toe, that blister became infected, and the infection ran up my leg. They told me it might kill me, but anyway they told me to have the leg cut off, which was quite a blow to me. I said, 'Cut away.'

"I had the same thing with this foot here, but my daughter fought it with medicine and bandage changes every day, and we whipped it. The blister healed."

It is approaching lunch. It's not hard to remember those ballplaying days, Werber says, though his memory falters when he gets tired, and he has been talking this morning a long time.

Is he happy to have lived a life of such length? There is a long pause.

"I've lived a good life. I had the most wonderful wife in the world, a nice lady. I've had everything that any normal man could want to have."