Santana talks are starting to heat up 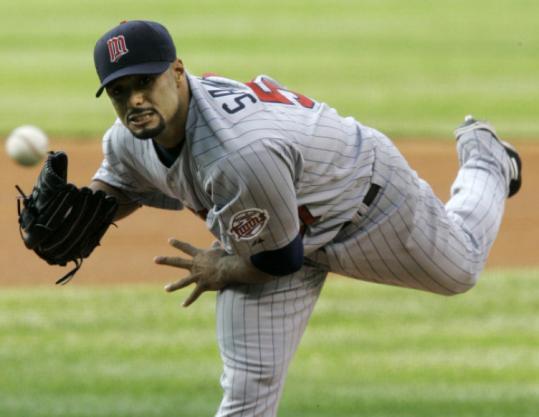 Though Jon Lester expressed a desire to remain with the Red Sox - and win a few more titles - during his trip to Fenway Park Wednesday, his name resurfaced yesterday as talks between the Red Sox and Minnesota Twins heated up over the prize of the offseason trade market: Johan Santana.

With the Twins shopping their ace, a two-time Cy Young Award winner, the Red Sox, Yankees, and Angels appear to be best situated to land him. But it will take quite a bit, in terms of prospects and the money that will be required to sign Santana to a new contract. He is signed through the 2008 season.

It wasn't yet to that point last night, with a major league source indicating that Santana's agent, Peter Greenberg, had not started negotiating with any team regarding a long-term deal, a necessity for any team surrendering the type of package the Twins are seeking.

The Red Sox are loath to part with either of their top two prospects, pitcher Clay Buchholz and center fielder Jacoby Ellsbury, but no player in the organization could be characterized as an untouchable.

Many names have surfaced in talks with the Twins, including those of Lester, center fielder Coco Crisp, minor league shortstop Jed Lowrie, and minor league pitchers Michael Bowden and Justin Masterson. According to multiple major league sources, the Red Sox would prefer to ship Lester and Bowden over Buchholz and Masterson. But talks have been fluid, with numerous packages discussed, as well as permutations. At this time, the focus for the Red Sox is solely on Santana.

Once a deal is struck - whether the Red Sox are involved or not - the team seeking Santana would have 72 hours to negotiate with him on a pact that could be record-breaking, perhaps as high as six years and $150 million. The pitcher has a no-trade clause in his contract.

Although a deal is not imminent, it could come together quickly. Or it could be extended through next week's winter meetings in Nashville.

With their trade of promising pitcher Matt Garza to Tampa Bay this week, the Twins are in search of pitching. And with the defection of Torii Hunter to the Angels via free agency, the team is also in the market for a center fielder. Crisp is signed for $15.5 million through 2009 with a club option for 2010.

Crisp was supplanted by Ellsbury during the postseason, as the rookie was inserted in the lineup in Game 6 of the American League Championship Series against the Indians. Crisp played stellar defense in 2007, but his offensive performance has not returned to the level it had been in Cleveland.

As for those who might be included in any deals, Lester, for one, has become used to the speculation. He was discussed as early as 2004, when his name surfaced in trade rumors surrounding Nomar Garciaparra.

"Until Theo [Epstein] calls me, I don't even worry about it," Lester said Wednesday. "If that happens, that's something we have to deal with at that point. But most of the time, it's just speculation, it's just hearsay that your name's involved. Until Theo calls me and says, 'Hey, you're no longer a Red Sox,' then we'll worry about it then.

"But I want to be part of this organization as long as I can, and hopefully, I will be."