With the Red Sox victories comes a loss of angst 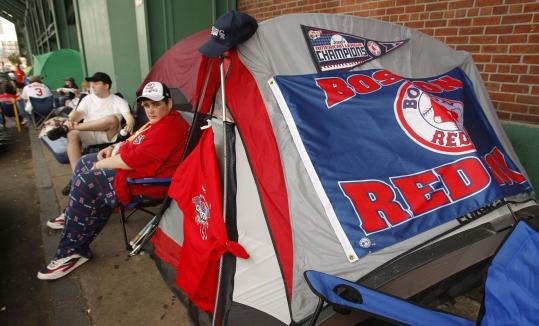 Red Sox fans camped outside Fenway Park yesterday waiting for tickets to the World Series, which begins tonight at Fenway Park when Boston takes on Colorado in Game 1. It is the second time in three years that the Sox have played in the Series. (BRIAN SNYDER/REUTERS)
By Brian McGrory Globe Staff / October 24, 2007

Life was simpler when we were Idiots.

On its face, this day in Boston, this week, this entire October, couldn't be any better. The Red Sox play in the World Series tonight for the second time in three years. The Patriots are undefeated and seemingly unstoppable. Boston College is ranked number two in America.

"Heaven in New England," yesterday's declared, in a column in which our mayor bragged about living in a "city of champions." USA Today has proclaimed the Red Sox to be the "biggest attraction in baseball." Fox executives have sore knees from their prayers of thanks that Boston, not Cleveland, has landed in the World Series.

We're rolling sevens everywhere. The perennial bridesmaid is now the odds-on favorite - two-to-one against Colorado, according to the Vegas line. Phones are ringing. Far-flung friends and family members are calling - tell us what it's like, fill us in on the excitement, don't spare a single detail of the city's singular swagger.

So shouldn't it feel better than it does?

The first order of business is to admit it to ourselves: 2004 was more meaningful. Back then, and in the 86 years that preceded it, we knew who we were. We were hapless, though never hopeless. We were the ones that always had something to overcome - a curse, a seemingly in surmountable deficit, a little-brother syndrome.

In the end, until that fabled October, we usually lost, but that was OK. In defeat, we had identity. We got to be the luckless loser. A team, its city, and indeed, an entire national following, thrived on it.

Tom Menino was sitting in his City Hall office yesterday saying what needed to be said. "This is different. In 2004, we never had a taste." He paused, then added, "When you think about Boston, 1 in 3 Bostonians is 20 to 34 years old. You and I know what it's like to lose. They don't."

Which means they don't know about our angst. It was our blanket, our source of comfort, our common bond. If angst were a natural resource, we could have had factories packaging it up 24 hours a day and shipping it to every part of the world.

As it was, we claimed all the angst for ourselves, though the good people of Chicago seemed to have their own supply. Red Sox fans could always blame our misfortunes on New York's payroll, Boston's mismanagement, free agents' unwillingness to come here. It gave us our status as perennial underdogs, the lovable spectacle. We wore that suit, frayed as it sometimes seemed, very comfortably.

Without it, what have we become?

And here's the answer we know but dread: Another free-spending, big market team that buys its way into the postseason with every expectation that it will win.

Jim Lonborg, the star pitcher of the 1967 Impossible Dream team, was on the phone yesterday. He's a dentist on the South Shore now, just about the nicest guy who ever played professional sports. Asked if anyone ever complains to him about his team not winning the heart-breaking seventh game of the World Series against the St. Louis Cardinals, he replied without hesitation: "No, never."

"You know that old cliché," he added, "it's all about the journey, and that was something that was always special about any Red Sox season - what it took to get there, the different cast of characters involved."

Nobody, especially not Lonborg, is disputing that this team is great. Pedroia and Papelbon are riotous to watch. Lowell and Varitek are two of the more thoughtful players in the game, Ortiz and Ramirez two of the most exciting.

Which doesn't necessarily make it bad. And having Fenway as the epicenter of the entire baseball world this week is nothing short of thrilling. But it's different this time from any other time, and it's really and truly not us.

There's another problem as well. We're used to making the World Series once a decade, skipping the 1990s because it didn't seem fair to hog all the futility.

Tonight's game marks the second Series in three years, which, combined with three Super Bowls, prompts yet another uneasy question: How do you savor something that is suddenly coming in bulk?

There was an unusual moment Sunday night in Fenway. The Indians were slouching off the field after the bottom of their calamitous 8th inning, one which saw the game go from a 5-2 sweat-inducing grind to an 11-2 slaughter. Some slob in the grandstand above third base stood up and hollered, "Cleveland sucks!"

If he had yelled it about the Yankees, he would have ignited a chant. As it was, not a single one of the hundreds of fans who undoubtedly heard him uttered a word of agreement, and the guy simply sat down.

Instead, people were gazing at the morose Cleveland players walking toward the dugout as if they were each lugging a cross.

Some fans surely thought about the tens of thousands of spectators waving their silly little towels at Jacobs Field a few nights before, every one of them so full of hope.

No need to mock what we know better than anyone else.

Brian McGrory can be reached at mcgrory@globe.com.