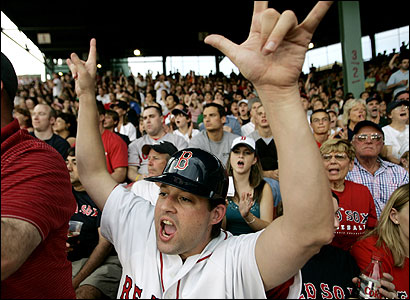 EquestrianCupid puts horse lovers in touch, and there's a singles site for goths, so in the ever-specializing world of Internet romance, this was probably inevitable: A dating service for Red Sox fans.

``You're crossing off the main thing when you're looking for someone: They're not a Yankees fan," says founder Tim Lampa, in all seriousness.

Lampa, a die-hard 31-year-old who grew up in Quincy, says he was originally looking for a way to get serious Red Sox fans together to see games and talk trivia. But he also confesses he has had some of the same problems as Ben Wrightman, the ``Fever Pitch" character whose relationships were sometimes derailed by his Red Sox fervor.

``I can speak from experience, where it was known to girlfriends in the past that I was a Sox fan and where they tried to accommodate my loyalty to my team, and it caused some issues, to put it nicely," said Lampa, who spent his college years working security at Wrigley Field and part of his adult life selling hot dogs at Fenway Park . ``I don't want to get into personal examples, but let's just say the World Series was a tough time for me."

Matchingsox.com works like most other dating sites, with a search tool that turns up matches according to gender, age, and location. But member photos show up on the screen like baseball cards. Users fill out standard information about their height, age, and body type, but they also list whether they bat left or right and their favorite players.

There are other departures from run-of-the-mill dating sites. New members are called draft picks. And the nicknames people assign themselves are uniquely revealing of devotion (bellhornswife12, StillNomahsGrl), dedication (Soxfansince1973), and certain priorities (SoxThenSex).

In the photos they post on the site, members are shown in various poses of Red Sox revelry: smiling in the grandstands, holding a beer, or posing like a shortstop while wearing Sox caps, jerseys, and sweatshirts. One photo is not of a person, just the Green Monster. Another shows a man smiling broadly with his arm around Sox great Johnny Pesky.

Predictably, perhaps, those who look for love on the site draw certain boundaries concerning their desires in a mate.

``I don't know if it's happenstance or luck, but I tend to like guys who are Red Sox fans," said Michelle Alexander, a 28-year-old high school English teacher from Dartmouth. ``Maybe I'm a Massachusetts girl, but I've never dated a Yankees fan. I've dated guys who like the Orioles or whatever, but I tend to like the guys with the B's on their hats."

Alexander says she's been contacted by several men through the site, including one from Utah who wanted her to go with his family to a Sox game at Fenway. Most of the time, she said, the conversations begin with, ``Who's your favorite player?" or ``What is your favorite Red Sox game?"

``You know when you see a Red Sox guy, they're proud, they're energetic, they're willing, and able to start a conversation," Alexander said. ``They've got the Boston accent, a good sense of humor. And the big thing is the passion. They care about the team. I think it's neat that they care that much about it."

Lampa has devoted himself to the site with an entrepreneurial zeal since its launch last March , handing out photocopied leaflets at ball games to promote the site and giving out free game tickets for blind dates. (He halted that practice after league officials asked him to stop, saying he was improperly using league material to promote his site. Matchingsox.com is not affiliated with Major League Baseball or the Red Sox.)

He doesn't seem to mind. Lampa dreams of one day assembling a vast, coast-to-coast community of fans who will communicate with one another through his site, and he has a reasonable start with about 1,000 members who live in a smattering of states.

But even if he never achieves the larger aim, he has more modest ambitions that, in the end, would make him just as happy.

``My main goal is to keep those New Yorkers in New York," he said, ``and keep them away from our Boston girls."