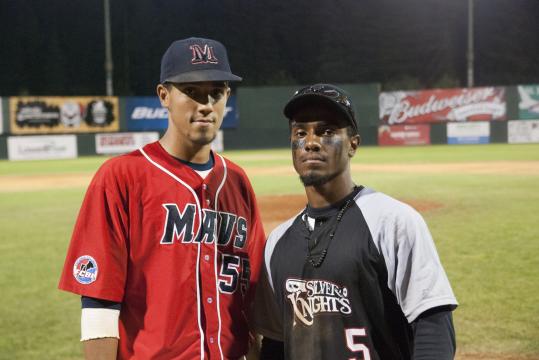 NASHUA — A light rain had been falling for a few innings, but the 20 spectators seated a few rows behind the home dugout at Holman Stadium would have sat through a hurricane to watch the two former Lowell High standouts team up in the inaugural Futures Collegiate Baseball League All-Star Game on Friday night.

In the top of the sixth inning, the cheers grew from Section 101 and the cameras snapped as Rays and Anyelo Roman hastily crossed the pitcher’s mound to take the left side of the infield.

It was the first time in more than a year that Manuel and Ramona Roman had the opportunity to watch their sons play together on the same team.

“I’m really proud and happy for them,” said Ramona. “Getting acknowledged as some of the best players in the league is a pretty good feeling.”

Now home for the summer, the former Lowell stars are shining in the Futures Collegiate Baseball League, with Rays at shortstop for the Nashua Silver Knights and Anyelo playing third base for the Seacoast Mavericks (Rochester, N.H.).

“It’s a great league,” said Rays of the second-year FCBL. “There are a lot of talented guys here from around the country. I’m definitely honored to play here.”

It took more than 1,600 miles for them to make it to their respective Summer League squads after suiting up this past season at Dakota State University in Madison, S.D.

It was an even longer journey for the brothers to get to Madison in the first place.

Both helped Lowell to Division 1 North semifinal games in their respective senior seasons, but Rays took a year off after graduating in 2008.

When Anyelo was a senior in 2009, along came Chris Shanahan, a persistent young coach looking to build up the baseball program at Northern Essex Community College.

Having scouted the area for years while an assistant at Rivier and Daniel Webster, Shanahan knew exactly the type of talent Lowell produced.

“I grew up in Tyngsborough and knew a lot of Lowell kids and knew the area,” said Shanahan, a 1997 graduate of Tyngsborough High School. “I noticed Anyelo because of his size, and he could pitch and hit. Rays was kind of off the radar. They were both overlooked.”

He did his due diligence by placing a few phone calls to Anyelo to see if he was interested in playing at Northern Essex, but Shanahan never heard back.

“I heard that he was thinking of going to Bunker Hill or coming to us,” said Shanahan. “Then they both came to us. It was a nice surprise.”

That decision would ultimately benefit all parties, creating a bond that has already paid dividends.

Referred to as a “natural born leader” by his coach, Rays was elected captain both years at Northern Essex, while Anyelo continued to hone his talent through his intensity and determination.

“I’ve never experienced as a coach or player two kids who work as hard as they do,” said Shanahan. “I always tell the guys that practice starts at 3, but go out and do something beforehand to get loose. There’d be two guys every day taking ground balls an hour or two before practice every single day.”

In fact, Shanahan was so impressed with Rays and Anyelo that he began to pound the pavement for them so that they could play more baseball.

He phoned representatives in the Arizona Collegiate Wood Bat League until they finally answered and accepted the Romans for the summer. Knowing that they would be far from done with their baseball careers after their two years with Northern Essex, he began working with the brothers on video packages to highlight them for recruitment at four-year colleges.

Coach Scott Hortness and his staff at Dakota State liked what they saw and offered both players the opportunity to come to Madison for two more years of college baseball.

“They responded back and really liked us,” said Rays. “It made more sense and was important financially, because there’s two of us.”

The Romans made an immediate impact and helped Dakota State (28-28 overall) advance to the finals of the Association of Independent Institutions tournament and earn a berth in the NAIA Baseball Championship.

He has not cooled off this summer. On Sunday, he was honored as the FCBL’s Player of the Week after a sizzling five-game stretch in which he hit .550 (11 for 20) with four homers, nine RBIs, and 10 runs.

“I tried to get him to tweak his stance for two years and he hit two home runs for me,” said Shanahan of Anyelo’s power surge. “Then he leaves and does what I told him to do and he hits 17.”

The Romans do stay in contact with Shanahan and he still gladly coaches them through whatever they may need, giving them a comforting, friendly voice from home.

“They always say to me ‘coach, thanks for helping us,’ ” said Shanahan. “They don’t realize what they’ve done for me in helping to build this program. They had faith in me, just like I have faith in them.”