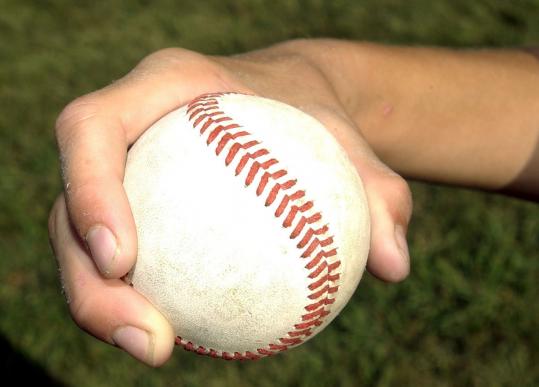 Little League pitchers continue to throw curveballs, but coaches and parents must come to grips with the fact that they may be causing arm problems down the line. (File/Tom E. Puskar/Associated Press)
By Kevin Paul Dupont Globe Staff / April 1, 2012
Text size – +

Curveballs, the serpentine servings that capture the fancy and fuel the dreams of every Little League pitcher, appear to be making a comeback. New research doesn’t say it’s OK for Cy Young young-uns to throw the curve, but it does say - contrary to previous studies and common belief - that the breaking ball isn’t any worse for young arms than an over-the-top, elbow-friendly, straight-down-Broadway fastball.

So there you go. Another bit of conventional wisdom knocked to deep right, over the wall and out of sight.

For years, even decades, doctors, coaches, and parents have tried to make Little League and other youth baseball circuits healthier, curve-free playing fields. The curveball, they felt, was a sure path to a ravaged arm for kids.

Now, as with red meat, caffeine, a daily glass of red wine (not you, kids), and even the occasional cigar (definitely not you, kids), the medical profession is giving the curve a somewhat positive spin - though not all doctors embrace it.

Dr. Lyle Micheli, director of the Division of Sports Medicine at Children’s Hospital Boston, said last week that he still believes the curveball is best kept in mothballs until a pitcher is at least 14. He also feels kids shouldn’t attempt to throw a slider, a pitch that puts even more stress on the elbow, until 16.

Micheli’s considered, scientific, doctorly advice on the subject: “Err on the side of caution.’’

The breaking pitch, Micheli acknowledged, can’t be blamed as the sole or even leading culprit in what he and others say has been a huge uptick in youth pitchers’ arm injuries in recent years. But he believes it’s a significant factor, along with overthrowing (too much pitching), related fatigue, and poor, often ill-taught mechanics.

Too often, by Micheli’s view, kids pitch too much, and their poor technique adds to their risk of getting hurt.

“It might be OK for a young pitcher to make, say, 150 pitches during the week with his Little League team,’’ noted Micheli. “But if dad’s got him in the back yard every night, throwing another 50 or 100 pitches, that’s probably not so good.’’

A recent New York Times report detailed the simmering division within youth baseball and the medical community. While old research indicated that throwing curves was perilous, the new study, commissioned by Little League Baseball and USA Baseball, concluded that it was neither good nor bad.

“It doesn’t mean we’re advocating throwing breaking balls,’’ Stephen D. Keener, president and chief executive of Little League International, told the Times. “We don’t promote it. We just think it’s very difficult to regulate it out of the game, and there is no data to show that throwing breaking balls is at the root of arm injuries.’’

This is one of those instances, though, when a solid piece of research - conducted by the University of North Carolina on more than 1,300 pitchers, ages 8 through college - doesn’t reflect the reality on the field or in the doctor’s office.

More than ever, kids come up with bad arms. Some of them are pre-teens in need of Tommy John surgery, the procedure in which the ulnar collateral ligament is reconstructed with a tendon transplanted from another area of the body.

The fact that Tommy John, a veteran major leaguer, needed the surgery to revive his own arm and rescue his career in itself underscores that pitching is always a risky business. And though it may be true that even-eyed science can’t certify that curveballs are hazardous to a kid’s arm, Micheli and other doctors believe otherwise.

“For pitchers with proper mechanics, the force of throwing a curveball is no greater than for a fastball,’’ renowned orthopedic surgeon James Andrews told the Times. “But that’s not what happens in reality on the baseball field.

“Many kids don’t have proper mechanics or enough neuromuscular control, or they are fatigued when throwing curveballs. Things break down. Those are the kids I’m seeing every day in my operating room.’’

Timothy Kremchek, an Ohio orthopedic surgeon and the Cincinnati Reds team physician, made clear in the Times story that he believes Little League should ban the breaking ball.

“They have an obligation to protect these 12-year-old kids and instead, they’re saying, ‘There’s no scientific evidence curveballs cause damage, so go ahead, kids, just keep throwing them,’ ’’ he said.

“It makes me sick to my stomach to watch the Little League World Series and see 12-year-olds throwing curve after curve. Those of us who have to treat those kids a few years later, we’re pretty sure there is a cause-and-effect.’’

Micheli is right there with Andrews and Kremchek, and no doubt scores of parents who have children nursing dead arms. When parents ask his advice, he offers the age 14 and 16 benchmarks for the breaker.

He also tells parents and their eager-armed children to work with a 300-pitch limit per week, be it games or practices. He also emphasizes the need for good coaching, making sure the young athlete finds a knowledgeable, experienced pitching coach to teach proper mechanics.

“No. 1, the number of pitches thrown - no more than 300 per week,’’ repeated Micheli. “No. 2, the type of pitches - stay away from the curve until the player is older, stronger. And No. 3, proper mechanics. Very important.’’

And No. 4, learn to throw the knuckleball?

“Hey, maybe not a bad idea,’’ chuckled Micheli. “I bet Tim Wakefield would like that.’’