Flutie brothers passing the time by reigniting their baseball passions 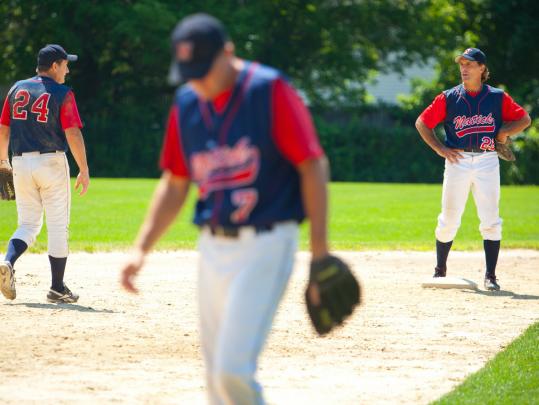 NATICK — The rain man is already here, at 8:30 on a recent Sunday morning. That’s him with the rake, meticulously grooming the area around home plate at Mahan Field. The rain man slept peacefully the night before because the forecast called for a sun-splashed day, and that’s how it turned out.

See, the rain man hates rain. His brothers will tell you he is obsessed about this. Rain can wipe out a ballgame. A terrible thing. A game on the schedule must be played. That’s how the rain man looks at it. So if the weather doesn’t cooperate, he goes to work, in the dark. Alone.

Judging from text messages from the rain man, says one brother, “It could be 2:30 in the morning, and he’ll be putting a tarp on the mound and around home plate, then spread some of that quick-dry stuff.’’

“He’s pretty fanatical about getting the games in,’’ says the other brother. “If it rains, and we’ve got a game that day, you’ll still see him at the field at 5 in the morning.’’ With the rake and the quick-dry.

The rain man doesn’t deny any of these stories. “I just want to play the game,’’ he says. He’s willing to do the groundskeeping. “Then I just wait for the sun to come up.’’

The rain man is Doug Flutie.

Darren Flutie acknowledges, “Some of us are glad when there’s a rainout. People have other things to do on a Sunday morning.’’

On Aug. 1, Darren had flown in the night before from a North Carolina business trip. But he was here. All three Flutie brothers were.

They make up three-quarters of the Natick Knights infield, playing in the Mass. Senior Baseball League, also known as the over-30 league. Bill, the third baseman, is 49; shortstop Darren is 43; and second baseman Doug is 47.

This isn’t kids’ stuff. It’s all about winning. Even now.

“Doug’s the most competitive one on the team,’’ said Darren.

Doug, who had back surgery in December, also has played for a Waltham team in an over-40 league and for Reading in the Intercity League.

The eternal kid. “That’s who he is,’’ said Doug’s wife, Laurie, sitting in the stands watching the Knights against the Braintree Braves.

The Knights’ dugout has a winning-is-everything tenor, splashed with frat house wisecracks. With a Knight on first and a sacrifice bunt in order in a scoreless game, Doug yells to Paul Ghilani, “I got 10 bucks that says you can’t get it down.’’ On the next pitch, Ghilani singles to left.

When first baseman Ghilani yells, “I got it!’’ as he chases a popup between first and home, Doug bellows, “You better, ’cause nobody’s covering first.’’

But Ghilani can trash talk with the best of them. When Jason Hoye flies out, Ghilani tells him, “That’s why you’ll never be anything but average.’’ In fact, the 32-year-old Hoye played for the Irish national team before moving to Natick to teach middle school.

Doug started the Knights five years ago. It’s been basically the same players. He supplied the uniforms and equipment. Any time one of the Knights wants extra batting practice, Bill Flutie has a cage at his house. Just show up. The Fluties will do the rest.

Almost all of the games are Sundays at 10 a.m.

Doug’s first recruits were Bill and Darren. “They were great baseball players,’’ said Doug. “I was an athlete that played baseball.’’

Doug convinced a number of ex-Natick players to shake off the rust, crank up the arms, and play ball again. Mike Caccavelli. Joe Arena. Ron Biaggi. Bill Gassett. Steve Ryan. Ghilani. “Guys I’ve known for 30 years,’’ said Doug. And some who hadn’t swung a bat in that long.

The Fluties are all hitting over .400. “There are pitchers who throw 85 miles per hour,’’ said Darren. “They can bring it.’’

Former Red Sox Jim Corsi pitched a game for the Knights. It’s common for players in the league to have a pro background.

By all accounts, the Fluties are still solid on defense.

“We just do our thing,’’ Darren said. “We’re still quick enough to get to most of the ground balls. We can turn to a double play.’’

Almost on cue, in the game against Braintree, Darren cleans up a grounder and flips it to Doug, who pivots smoothly and fires to first. Double play. The runner tries to take Doug out. “They usually don’t do that in this league,’’ said Doug, who said he admired the runner’s competitive spirit.

Still, the Fluties have to make concessions to age. Before his first at-bat against Braintree, Doug tells player/manager Ghilani, “I’m not ready to run yet,’’ meaning, “Don’t give me the steal sign.’’

In the 7-2 win over Braintree, Doug goes 3 for 5, Bill doubles to deep left, and Darren has an RBI single. “Bill rips the ball,’’ said Doug. “Darren and I are more contact hitters.’’

When the brothers were growing up, “there was always a sibling rivalry,’’ said Doug. “But when we’re on the same team, it’s us against the world.’’

Bill’s sons, Billy, a senior wide receiver/punter at Boston College, and Brett, who graduated from Natick High this year and received a baseball scholarship from Rollins College in Florida, could be future Knights.

Uncle Doug already has their future mapped out. “I can’t wait until we can play with Billy and Brett. That would be the ultimate,’’ he said.

Doug Flutie has a lot on his résumé: He won the Heisman Trophy, has raised millions for an autism foundation named for his son, Dougie; has been a pitchman and a TV football analyst; and plays the drums in the Flutie Brothers Band.

One thing he’s lousy at is standing still. He has to be doing something. Time slips by. Days, minutes, moments have to count. The Fluties know they can’t do this forever, even as they press the issue.

“This is what you love to do, and should be doing,’’ said Bill. “It’s the love of playing, competing. You miss it.’’

After the successful back surgery and the wonderment of another summer playing ball with his brothers, Doug Flutie said, “I feel like a kid again. I’ll play as long as I’m healthy. I’ll stop when I need a pinch runner.’’