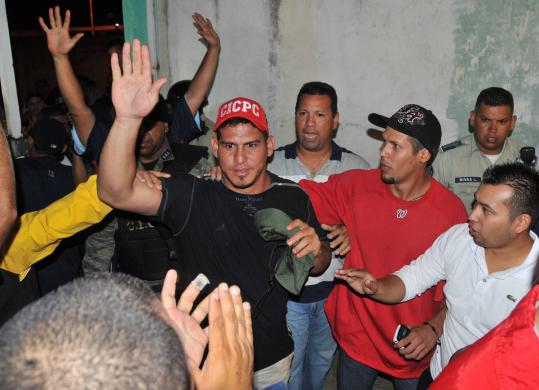 Nationals catcher Wilson Ramos waves to well-wishers as he arrives at his home after being rescued from kidnappers. (STR/AFP/Getty Images)
By Ian James Associated Press / November 13, 2011

VALENCIA, Venezuela - His eyes tearing up with emotion, Washington Nationals catcher Wilson Ramos embraced his rescuers yesterday and said he had wondered whether he would survive a two-day kidnapping ordeal that ended when commandos swept into his captors’ mountain hideout.

Ramos said he was happy and thankful to be alive a day after his rescue, saying that his final moments as a prisoner were hair-raising as police and the kidnappers exchanged heavy gunfire in the remote area where he was being held.

He said his kidnappers had carefully planned the abduction and told him they were going to demand a large ransom.

“I didn’t know if I was going to get out of it alive,’’ Ramos said at a police station in his hometown of Valencia, flanked by police investigators, National Guard commanders, and Justice Minister Tareck El Aissami. “It was very hard for me. It was very hard for my family.’’

El Aissami said authorities arrested four of the captors, all of them Venezuelan men in their 20s. A 60-year-old woman and a 74-year-old man were also arrested as accomplices for supplying the kidnappers with food from their home in the area, he said. The six suspects were led past journalists at the police station with black hoods over their heads.

Authorities were still searching for four Colombian men who escaped during the rescue, El Aissami said. He didn’t say whether anyone was wounded in the gunbattle.

Ramos, 24, was seized at gunpoint outside his family’s home Wednesday night and whisked away in an SUV. It was the first known kidnapping of a Major League Baseball player in Venezuela, and the abduction set off an outpouring of candlelight vigils and public prayers at stadiums as well as outside Ramos’s house.

Once investigators thought they had found the general area where Ramos might be, President Hugo Chavez personally authorized an aerial search mission and teams also set out on foot in the mountainous area, El Aissami said. He said the teams searched most of Friday and finally came upon the remote house where Ramos was being held. Chavez followed the operation “minute by minute,’’ the justice minister said.

Ramos had recently returned to his homeland after his rookie year with the Nationals to play during the offseason in the Venezuelan League.

When he was abducted, he was standing with his father and two brothers just outside the front door of his home in a working-class neighborhood of Valencia, about 90 miles west of Caracas.

Ramos said his captors drove him for five or six hours, and once changed from one SUV to another. He said they bound his hands at first, but later allowed him not to be tied up. The kidnappers didn’t cover their faces and they spoke little to him, he said.

“They demanded only money,’’ he said.

Ramos said he was kept in a room and passed the time lying on a bed. When the gunfire erupted Friday as his rescuers arrived, “I was on the bed and I threw myself directly to the floor.’’

“It was like 15 minutes of shots until the officials arrived and saw me in the room,’’ said Ramos, who hugged the justice minister as well as police and National Guard officers at the news conference.

Ramos said he was enjoying being back with his family, and planned to start training tomorrow to play with his Venezuelan team, the Aragua Tigres, on Wednesday.

After his rescue was announced Friday night, Ramos’s mother, Maria Campos de Ramos, celebrated, exclaiming on television: “Thanks to God!’’

“He asked me to thank all who played a role in his rescue, and all those who kept him and his family in their thoughts and prayers,’’ Rizzo said in a statement. “I join Wilson in thanking the many law enforcement officials in Venezuela and investigators with Major League Baseball who worked tirelessly to ensure a positive ending to what has been a frightening ordeal.’’