THIS STORY HAS BEEN FORMATTED FOR EASY PRINTING
World Series notebook 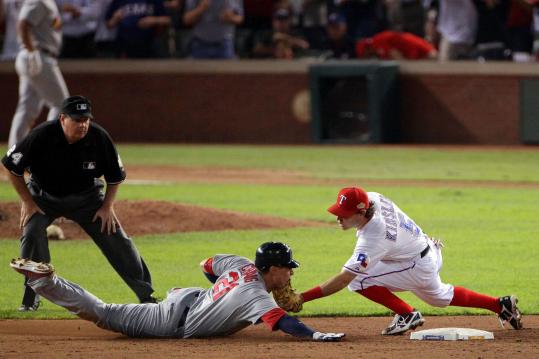 ARLINGTON, Texas - When C.J. Wilson walked off the mound during the sixth inning in what could have been his last start for the Texas Rangers, they were down by a run.

This time, it was good enough for the Rangers.

Despite another sometimes erratic outing against the St. Louis Cardinals, Wilson kept Texas close enough in another matchup against Chris Carpenter.

The Rangers tied the score in the bottom of the sixth, took the lead in the eighth, and are now one win from the franchise’s first World Series title after a 4-2 victory last night to take a 3-2 series lead.

Winless this postseason (0-3, 6.08 ERA in five starts) after winning 16 games as the Rangers’ No. 1 starter in the regular season, Wilson walked five, threw a wild pitch, and made an error. Two of Wilson’s walks in Game 5 were intentional passes to slugger Albert Pujols.

And the Rangers still trailed only 2-1 when the free agent-to-be lefty exited with one out and one on in the sixth. Wilson’s 108th and last pitch was a single by David Freese.

St. Louis got both of its runs in the second, an inning that started with walks to Matt Holliday and Lance Berkman. Holliday already had slid headfirst into second base after Wilson threw a wild pitch that bounced at the feet of Berkman and got away from catcher Mike Napoli.

After Freese hit a fly ball, Yadier Molina had an RBI single to left before Skip Schumaker drove in another run with a groundball for a 2-0 lead.

Rafael Furcal then opened the third with a bunt single. He went to second base after Wilson, who had slipped coming off the mound, picked up the ball with his bare hand and tried to flip it with a backhanded motion. The ball barely got off the ground and rolled past first baseman Mitch Moreland for an error.

Wilson escaped unscathed that inning when, after an intentional free pass to Pujols, Holliday grounded into an inning-ending double play.

In Game 1 of the Series on the road, Wilson had a Rangers postseason-high six walks (two intentional). He gave up three runs in 5 2/3 innings, but left with the score tied 2-2 before Texas lost, 3-2.

The 11 walks by Wilson in this Series are the most since Allie Reynolds had 11 for the 1951 Yankees.

With Series ratings close to a record low last weekend, commissioner Bud Selig expects a rebound this week with the possibility of the first Game 7 since 2002.

The Cardinals’ 16-7 rout in Game 3 drew the second-lowest Series rating ever, but viewership increased for the tighter Game 4.

Selig is looking ahead to bidding for a national television contract to replace the seven-year deals with Fox and Turner Sports that are bringing the sport about $3 billion from 2007-13.

“We’ll have more competition than we’ve ever had from people who are willing to pay money. That tells me more than anything,’’ Selig said before Game 5.

Saturday’s game on Fox drew a 6.6 fast national rating and a 12 share. The only Series game with a lower rating was the rain-delayed third game of the 2008 Series between Philadelphia and Tampa Bay, which got a 6.1.

If the Series extends to seven games, Rangers manager Ron Washington has no plans to alter his pitching rotation.

Even if potential weather issues in St. Louis were to push the series back an extra day, Washington said he wouldn’t change his pitching plans.

Blue Jays slugger Jose Bautista joined Alex Rodriguez and Barry Bonds as the only players to repeat as recipient of the Hank Aaron Award that goes to each league’s top offensive players.

Bautista, who also won the AL award last year with 54 homers, had 43 homers this season and batted a career-best .302 with 103 RBIs and a majors-best .608 slugging percentage.