Those ubiquitous accessories have strong hold on (almost) all players 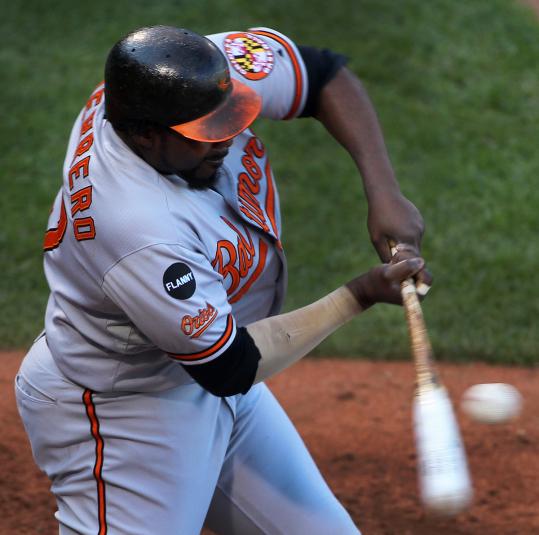 And then there’s Jorge Posada.

“I just like the way it feels without them,’’ he says. “I tried ’em when I was younger. I never got used to them.’’

But not using gloves can mean calluses, blisters, and peeling. So Posada followed the advice of longtime outfielder Moises Alou. He urinated on his hands to make them tougher.

“The big joke was you didn’t want to shake Jorge Posada’s hand during spring training,’’ says Globe writer Peter Abraham, who used to cover the Yankees.

Posada sheepishly acknowledges those days are over.

“My wife found out about it and made me stop,’’ he says with a laugh. “Now when my hands get cracked, I use what the trainer gives me.’’

The Orioles’ Vladimir Guerrero is another star player who prefers the barehanded approach.

Guerrero also admits to urinating on his hands. And at least one Red Sox pitcher used to do the same thing.

“I used to pee on my hands, because when my father pitched in Cuba, he did that,’’ says the great Luis Tiant. “He said it really toughened up his hands.’’

Hall of Famer Reggie Jackson says, “Gloves are for girls,’’ and players wear them only for endorsement deals.

“I wore a glove because my girlfriend told me my hands were ugly,’’ he explained. “She said, ‘Did you walk on your hands?’ So I started wearing a glove.’’

The Hawk sets a trend The history of the batting glove in baseball is sketchy before the mid-1960s.

Philadelphia’s Hughie Jennings may have worn a glove in 1901 and Lefty O’Doul of the Dodgers wore a “regular street glove’’ because of an injury in 1932, according to the book “Game of Inches’’ by Peter Morris.

Bobby Thomson of the Giants wore golf gloves in spring training in 1949. Ted Williams may have donned a golf glove in batting practice to ward off blisters after he returned from Korea.

Mickey Mantle wore a single white golf glove in a 1960 “Home Run Derby’’ television contest against Ernie Banks. When questioned about it on the show, he grinned and said it helped his grip.

But hands basically were naked until Ken “Hawk’’ Harrelson inadvertently changed all that. The date was Sept. 4, 1964. Harrelson was with the Kansas City Athletics. The Hawk was a platoon player, and as a righthanded hitter, he knew he wasn’t going to play that night because the Yankees had scheduled a righthanded pitcher. So he went out and played 27 holes of golf.

“All of a sudden, now I go from the golf course to the ballpark, and I see I’m in the lineup because they’ve switched to Whitey Ford,’’ recalls Harrelson. “I was taking batting practice, but because of the 27 holes, I had a little blister on my left hand. It was really sore.’’

The Hawk fetched a bright red golf glove from his pants in the clubhouse.

“So then I came up in the bottom of the first inning, and all these Yankees were giving me catcalls and everything else because I had this flaming red golf glove on,’’ says Harrelson, 70, now an announcer for the White Sox. “Whitey hung me a curveball and I hit it about 450 over that left-center-field wall.

“Next time I come up, there they are doing catcalls, not quite as bad, and later on in the game, I hit another one.

“So the next day, when all the Yankees came walking out on the field, they all had red golf gloves on. Mickey Mantle sent the clubbie out to get a couple dozen red golf gloves. And that’s the way it started.

“I didn’t think I was starting something. I just knew that I was going to wear one from there on out. I really haven’t paid any attention to it.’’

Going into business Slowly at first, more players started wearing gloves. In the early 1980s, Franklin Sports Inc. of Stoughton hired two-time MVP Mike Schmidt of the Phillies to design a glove strictly for professional baseball players. He started giving them out at the 1983 All-Star Game, and Franklin eventually became the official glove of Major League Baseball.

“In the old days, we didn’t pay anybody, but we had a club,’’ says Franklin president Larry Franklin, whose family started in the scrap leather business in Brockton 65 years ago. “We’d award $250 a month for each category a player led in, including batting average, most hits, most homers, most RBIs, and most stolen bases.

“Guys would win and they’d be ecstatic. I remember Kirk Gibson calling me and asking me if he won that month. Wade Boggs won it all the time.’’

Franklin had 80 percent of the major league batting glove market. The Franklin name was emblazoned on almost every glove, featured prominently on every television closeup of a hitter.

“ realized the shoes weren’t getting any exposure, and they started throwing money around,’’ says Franklin.

Some players began earning up to $1 million in head-to-toe endorsement deals.

But for the last 29 years, John Ballas, director of player relations for Franklin, has been schlepping around a shopping cart and suitcase of batting gloves to all major league teams.

But he’s a welcome sight to finicky ballplayers. He custom-fits their hands with strategically placed 5-millimeter pads and sends the information to the factory in Da Nang, Vietnam.

His biggest customer was the Phillies’ Lenny Dykstra.

During the 1993 World Series against Toronto, Ballas got a frantic phone call from the Phillies’ equipment manager. Dykstra had only six pairs of gloves for two games.

Ballas knows players’ hands better than he knows the back of his own hand.

When the Cardinals’ Mark McGwire donned gloves, it looked like a scene from the O.J. Simpson trial.

“It was the funniest thing in the world to watch,’’ says Ballas. “The gloves are crying - you can hear them crying. He finally gets them on, and you’d think he’s going to complain, but he just smiles and says, ‘Oh, these are great.’ ’’

Ballas has fitted Barry Bonds since Bonds’s early days with the Pirates; the slugger’s cap size may have changed, but his hand size did not, he says.

“I told him he has the hands of a 14-year-old girl, and he went around telling people that,’’ says Ballas. “But he swings with every fiber of his being.’’

Sticking points The average player goes through eight dozen gloves a year, according to Ballas.

In the Red Sox clubhouse, nobody goes through more than David Ortiz. Roughly a pair of Easton gloves a game.

Ortiz scoffs at those who say games are longer because of players stepping out and adjusting the Velcro tabs on their gloves.

“Come on, man, that takes five seconds,’’ he says.

But not always. Former Sox shortstop Nomar Garciaparra drove some fans crazy with his obsessive fidgeting with his batting gloves.

On the 2007 Red Sox, Bobby Kielty, Doug Mientkiewicz, and Doug Mirabelli didn’t wear gloves. Now everyone on the team does.

“There’s nobody here that doesn’t use them,’’ he says, surveying the crowded Yankee clubhouse.

Asked about players on other teams, he shrugs.