THIS STORY HAS BEEN FORMATTED FOR EASY PRINTING
Baseball roundup 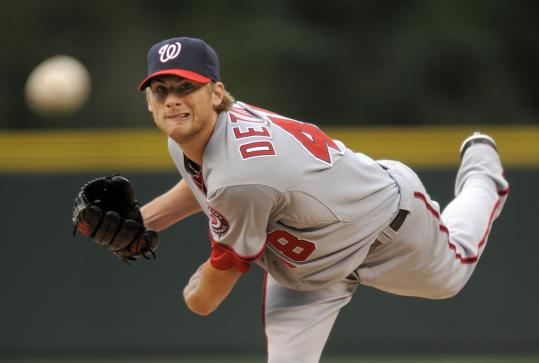 Ross Detwiler outpitched Cliff Lee by tossing 7 1/3 impressive innings and the Nationals beat the NL East champion Phillies, 3-0, last night to complete a sweep of their day-night doubleheader in Philadelphia.

In the opener, Tommy Milone threw six scoreless innings and pinch hitter Ryan Zimmerman delivered an RBI single in the 10th to lift the Nationals to a 4-3 victory.

Detwiler (3-5) allowed three hits in his longest career outing. The lefthander earned his first road win after going 0-9 in his first 12 starts away from home.

The slumping Phillies have lost four straight since clinching their fifth consecutive division crown. It ties their longest losing streak of the season, previously done twice. They have been resting many of their regulars, however.

The Nationals have won nine of 12.

Henry Rodriguez got the last two outs in the eighth and Drew Storen finished off the three-hitter for his second save of the day and 40th in 45 chances this season.

Kershaw (20-5) allowed six hits and one run in 7 1/3 innings, walked two and struck out six to go 5-0 against the Giants this season - the first Dodgers pitcher to do so since Vic Lombardi in 1946. He did it on what would have been Lombardi’s 89th birthday.

Any combination of three Arizona victories or San Francisco losses and the Diamondbacks will dethrone the Giants as division champions.

Rangers 7, Athletics 2 - Adrian Beltre hit a three-run homer in the first that held up for 15-game winner Derek Holland as AL West-leading Texas won in Oakland.

Rickie Weeks drove in two runs to help the Brewers reach 91 wins for the first time since 1992.

Royals 10, Tigers 2 - Eric Hosmer went 5 for 5 with a three-run homer and Luis Mendoza got his first major league win in more than three years for host Kansas City.