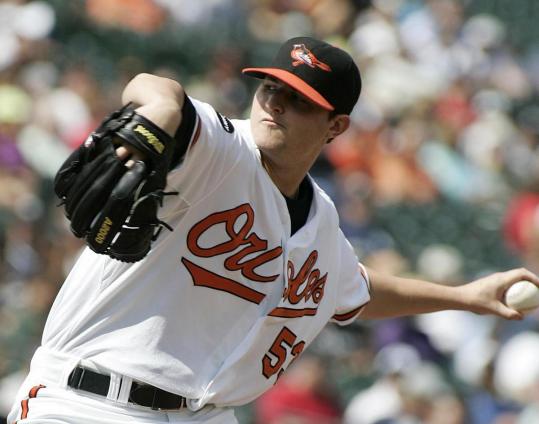 Granderson hit a three-run drive in the third inning and a solo shot in the seventh to take over the major league lead in homers (38) and RBIs (107).

In the first game, rookie Zach Britton allowed four hits over seven innings to lead the Orioles to a 2-0 victory.

The second game was tied at 3 before New York hit three straight homers in a four-run sixth. After Robinson Cano connected with a man on, Nick Swisher and Andruw Jones also went deep.

Nova (14-4) gave up three runs and seven hits in seven-plus innings, striking out seven and walking two. The righthander has won seven straight starts and is 10-0 in 11 outings since June 3.

In the first game, Britton allowed four singles, struck out five, and walked one before being pulled after throwing a career-high 120 pitches. It was a vivid contrast from his previous start against the Yankees, when he yielded nine runs and got only one out in a 17-3 loss July 30.

Britton (8-9) has given up only one run over 12 innings since coming off the disabled list (strained left shoulder) Aug. 22. Before going on the DL, he surrendered 23 runs in three starts.

Brewers 3, Cubs 2 - Zack Greinke pitched effectively into the eighth to remain perfect at home, Corey Hart homered for the second time in as many days, and Milwaukee completed a three-game sweep of Chicago.

Greinke (13-5) improved to 10-0 at Miller Park and didn’t allow a hit until Marlon Byrd’s fifth-inning bloop. In the bottom of the inning, Greinke singled, stole second, and scored on Hart’s blast.

Astros 4, Giants 3 - Matt Downs delivered a go-ahead single with one out in the 11th as visiting Houston beat San Francisco to salvage a four-game split.

Reds 5, Nationals 4 - Joey Votto led off the 14th with his second home run of the game lifting host Cincinnati over Washington.

Rangers 9 Angels 5 - Josh Hamilton broke out of a slump with a long two-run homer and the tiebreaking RBI single for host Texas.