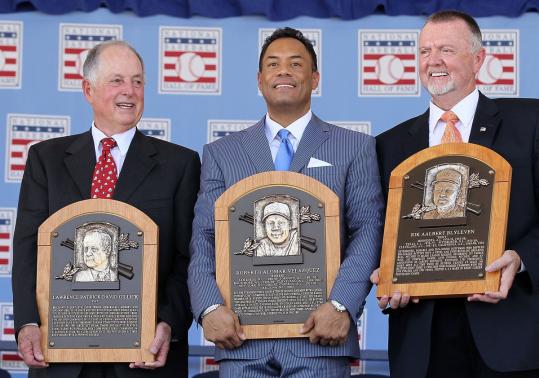 COOPERSTOWN, N.Y. - Roberto Alomar stared at the adoring crowd and was nearly rendered speechless, the tawdry episode of his stellar career long since forgotten. Bert Blyleven was more composed but moved nonetheless as he stared at his 85-year-old mother and reminisced about his late father.

Both men were inducted yesterday into the Baseball Hall of Fame along with front office guru Pat Gillick.

Speaking first in his native Spanish, Alomar, the third Puerto Rican player to be enshrined, along with Orlando Cepeda and Roberto Clemente, said he felt proud.

“I always played for my island,’’ Alomar said, dozens of Puerto Rican flags blowing in a gentle breeze on a sunny afternoon. “It is a true blessing to be able to share this moment with all of you. I have you in my heart. I am standing here today because of the fan support.

“To my family, to my fans, to all the Puerto Rican people . . . and the game of baseball, you are and will always be my life and my love.’’

The switch-hitting Alomar won a record 10 Gold Gloves at second base, was a 12-time All-Star, and a career .300 hitter. Full of baseball smarts and grace, he’s also linked with one of the game’s most forgettable moments - he spit on umpire John Hirschbeck during an argument in 1996.

The two have long since moved past that, and Hirschbeck was invited to come yesterday. He had to decline because he was working a game in St. Louis.

Alomar, a member of the Toronto Blue Jays’ World Series championship teams in 1992 and ’93, was the first player to enter the Hall of Fame wearing a Blue Jays cap and just the 20th second baseman to be inducted.

“I did not know how nervous I would be,’’ said Alomar, who was bypassed in his first year of eligibility and on his second try was named on 90 percent of ballots cast, becoming the 26th player to garner at least 90 percent in any election. “Suddenly, I feel speechless.’’

Alomar also thanked his mom, his dad, Sandy Alomar Sr., who forged a 15-year major league career as an infielder, and his big brother, Sandy Jr., a catcher who played in the majors for two decades but was hampered by injuries.

“My mom is the most wonderful person in my life,’’ Alomar said as he looked down at his mother, her teary face buried in a handkerchief. “She gave me love. She took me to the ballpark, even though I was a little boy running around, hanging around. Mom, thank you for everything that you have done for me. If I’m standing here today, it’s because of you.

“And to my parents, thank you for teaching me how to be a humble person. That’s what counts.’’

Blyleven, the first Dutch-born player to be enshrined, thanked his parents for the drive and determination he needed to succeed. Selected by Minnesota in the third round of the 1969 amateur draft, he became the youngest pitcher in the majors when the Twins called him up June 2, 1970, after just 21 minor league starts.

Blyleven, whose amazing curveball frustrated batters in his 22-year career, finished with 287 wins, 3,701 strikeouts, 60 shutouts, and a pair of World Series rings - in 1979 with the Pittsburgh Pirates and 1987 in his second stint with the Twins.

Still, his path toward the Hall was a slow, steep one - he drew the backing of only 14.1 percent one year - but on his 14th try became the first pure starting pitcher to get selected by the BBWAA since Nolan Ryan in 1999.

Blyleven’s father, Joe, who died of Parkinson’s in 2004, fell in love with baseball and the Dodgers after the family moved to Southern California in the late 1950s, and built a mound in the backyard, the genesis of his son’s Hall of Fame career.

“I wish he was here,’’ said Blyleven, who in the past had regretted not being selected for the Hall while his father was still alive. “But you know, Mom, I know he’s up there looking down right now. Mommy, I love you.’’

Baseball has lost several giants in recent years, and Blyleven remembered the ones that helped him along the way.

“I know in my heart that Harmon Killebrew, Willie Stargell, Bob Feller, Chuck Tanner, and Kirby Puckett are looking down at all of us right now,’’ Blyleven said.

Gillick, a lefthanded pitcher in college, said he knew he had to find another way to stay in the game after five years in the minor leagues. He found it in the front offices of four major league teams, winning titles in 1992 and ’93 with Toronto and in 2008 with Philadelphia.

Gillick’s teams posted winning records in 20 of his 27 seasons as a GM and advanced to the postseason 11 times.