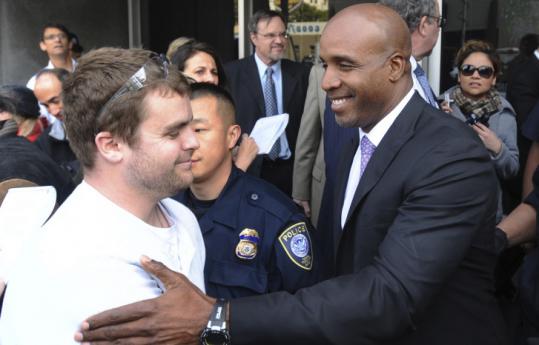 The hammer dropped on baseball’s home run king yesterday as a federal jury convicted Barry Bonds of obstructing justice when he testified under oath about his alleged steroid use while he was rewriting the sport’s record book.

An indelible face of the steroids scandal that sapped Major League Baseball’s integrity, Bonds is unlikely to serve prison time for the felony conviction. The jury deadlocked on three perjury counts against him, forcing a mistrial on the charges.

Bonds sat dispassionately at the defense table while the conviction was announced in US District Court in San Francisco, not far from the ballpark where in 2007 he launched his 756th career home run to pass Hank Aaron as baseball’s all-time leader.

He was convicted of corruptly providing evasive, false, or misleading testimony in 2003 to a grand jury investigating the Bay Area Laboratory Cooperative’s distribution of steroids to elite athletes.

“This case is about upholding one of the most fundamental principles in our system of justice: the obligation of every witness to provide truthful and direct testimony in judicial proceedings,’’ said Melinda Haag, the US attorney for the northern district of California. “In the United States, taking an oath and promising to testify truthfully is a serious matter. We cannot ignore those who choose instead to obstruct justice.’’

Bonds, advised by his lawyers to withhold comment, smiled, autographed a baseball, and flashed a victory sign as he left the courthouse.

“Are you celebrating tonight?’’ a fan asked.

“There’s nothing to celebrate,’’ he said.

Bonds is due back in court May 20, when his lawyers are expected to argue that the conviction should be thrown out and prosecutors could formally announce whether they will seek to retry him on the perjury charges.

Federal sentencing guidelines indicate that Bonds could serve as much as 21 months in prison for the conviction. But Judge Susan Illston has opted to impose far less severe punishment for similar convictions stemming from the BALCO investigation. Illston, for instance, sentenced both Olympic cyclist Tammy Thomas and track coach Trevor Graham to house arrest for convictions stemming from their grand jury testimony.

Bonds joined Miguel Tejada as the only major league stars convicted of federal crimes stemming from the steroids scandal. Tejada pleaded guilty in 2009 of lying to Congress, his case foreshadowing a high-profile trial scheduled for July in which Roger Clemens plans to fight six felony charges involving his congressional testimony.

The Bonds case proved problematic for prosecutors, who managed to secure a conviction on only one of four subsections of the obstruction of justice charge against Bonds.

The testimony leading to the statement for which he was convicted began with prosecutors asking Bonds whether his personal trainer, Greg Anderson, ever gave him anything that required a syringe for him to inject. Bonds, the son of the late major leaguer Bobby Bonds, gave a rambling response in which he claimed he and Anderson did not pry into each other’s business.

Then, in the only statement for which he was found guilty, Bonds offered a vague elaboration.

“That’s what keeps our friendship,’’ he told the grand jury. “You know, I am sorry, but that — you know, that — I was a celebrity child, not just in baseball by my own instincts. I became a celebrity child with a famous father. I just don’t get into other people’s business because of my father’s situation, you see . . .’’

The verdict made little sense to Bonds’s lawyer, Allen Ruby. He said the government “has determined it’s unlawful for Barry Bonds to tell the grand jury he’s a celebrity child and to talk about his friendship with Greg Anderson.’’

The prosecution’s case was badly damaged by Anderson’s refusal to testify against Bonds. Finding Anderson in contempt of court, Illston sent him to jail for the duration of the trial.

Illston had sentenced Anderson in 2005 to three months in prison and three months of home confinement after he pleaded guilty to single counts of steroid distribution and money laundering.

In the Bonds case, government lawyers also suffered a setback when the judge prohibited them from introducing evidence that Bonds failed three drug tests. She ruled the tests were inadmissible because Anderson was the only person who could verify that Bonds submitted the samples.

The jury foreman, who identified himself only as Fred, was quoted after the verdict as saying that if prosecutors intend to pursue this case, “they’re going to have to do more homework than they did.’’

Bonds, 46, who finished his career with 762 home runs, also set baseball’s record for home runs (73 in 2001) after he allegedly began ingesting illegal steroids. As one of the game’s most feared hitters, he also set career records for walks (2,558) and intentional walks (688).

Bonds acknowledged using steroids but claimed Anderson duped him into believing they were flaxseed oil and arthritis cream.

The trial produced many uncomfortable moments for Bonds, as the jury listened to his former girlfriend, Kimberly Bell, testify about how performance-enhancing drugs allegedly altered him physically and emotionally. She testified that Bonds had shrunken testicles, hair loss, back acne, and bloating from steroid use. In his fits of rage, she told the jury, Bonds threatened to behead her and cut out her breast implants.

The conviction was the culmination of nearly four years of court wrangling since a grand jury handed up indictments against Bonds in 2007.

Baseball commissioner Bud Selig, often criticized with owners and union leaders for turning a blind eye to nearly two decades of steroid use by major leaguers, asserted that the Bonds trial “is a stark illustration of how far this sport has come.’’

Selig said comprehensive testing over the last eight years has sent a strong message that “performance-enhancing drugs have no place in baseball.’’

Material from wire services was used in this report