THIS STORY HAS BEEN FORMATTED FOR EASY PRINTING
Baseball Notebook 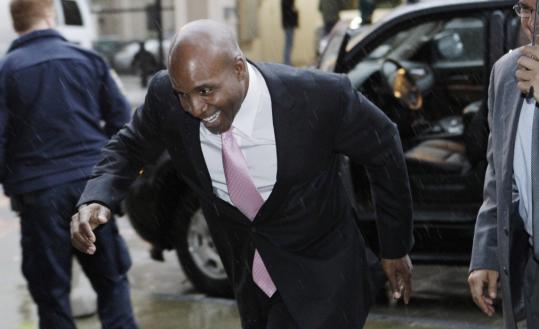 Home run king Barry Bonds arrives at a federal courthouse in San Francisco as testimony continued in his trial on perjury charges. It will resume on Monday. (Paul Sakuma/Associated Press)
Associated Press / March 25, 2011

One of the world’s foremost experts in detecting performance-enhancing drug use among athletes recounted yesterday for the Barry Bonds jury in San Francisco how authorities unmasked the designer steroid dubbed the “clear.’’

Bonds has admitted using the steroid, but said his personal trainer misled him into believing it was flaxseed oil.

Larry Bowers, the US Anti-Doping Agency’s chief scientist, told the jury that his agency anonymously received a syringe with trace amounts of liquid in the summer of 2003. Scientists using highly technical chemical-detection equipment came up with a recipe for the liquid. Using the recipe, the agency had a batch ginned up and injected into baboons on their way to developing a urine test for the steroid, also called “THG,’’ that was put in place by late 2003.

A chemist named Patrick Arnold developed the steroid to evade detection and it was distributed to elite athletes by the Bay Area Laboratory Co-Operative and Bonds’s personal trainer, Greg Anderson.

Bowers also testified about the side effects of steroids, such an acne breakout and “bloating.’’

The government plans to use that testimony to support the expected testimony of Kimberly Bell, Bonds’s former mistress. Bell plans to testify that she witnessed physical and mental changes in Bonds that prosecutors allege were side effects of steroid use.

With an eye on the forthcoming testimony by Bell, federal prosecutor Jeff Nedrow asked Bowers what effect steroid abuse could have on testicles.

“They would shrink,’’ Bowers said.

In court papers filed before the trial started, prosecutors said Bell is planning to tell the jury that Bonds’s testicles shrank during their nine-year relationship.

Out of the presence of the jury, US District Judge Susan Illston denied Bonds attorney Allen Ruby’s motion to exclude such evidence.

Hoskins has testified that he strongly suspected Bonds was using steroids between 1999 and 2003. Hoskins yesterday testified that Bonds’s surgeon, Arthur Ting, told him that a Bonds elbow injury was caused by steroid use.

Feliz will close Neftali Feliz will keep closing games instead of starting them for the American League champion Rangers.

The team has settled on its starting rotation and Feliz, who set a major league rookie record with 40 saves last season, will remain the closer. Feliz had been stretched out this spring in case the Rangers decided to use the hard-thrower as a starter.

Hunter, however, left yesterday’s exhibition win over the Reds in the third inning because of a strained right groin.

Ross out three weeks Giants outfielder Cody Ross is expected to miss the next three weeks because of a strained right calf. Ross hurt himself chasing a fly ball in a game Wednesday . . . Oliver Perez and the Nationals reached agreement on a minor league contract. The deal came two days after the Mets released the lefthander despite owing him $12 million. If Perez makes the Nationals, they will be responsible for only $414,000 . . . Braves righthander Jair Jurrjens was removed one inning into his start as a precaution after feeling discomfort along his right ribs. Jurrjens said it was a cramp rather than an injury . . . Phillies GM Ruben Amaro Jr. acknowledged that second baseman Chase Utley will begin the season on the disabled list with patellar tendinitis, chondromalacia, and bone inflammation in his right knee . . . The A’s (Trevor Cahill) and Orioles (Jeremy Guthrie) announced their Opening Day starters.