Baseball as a cultural connection 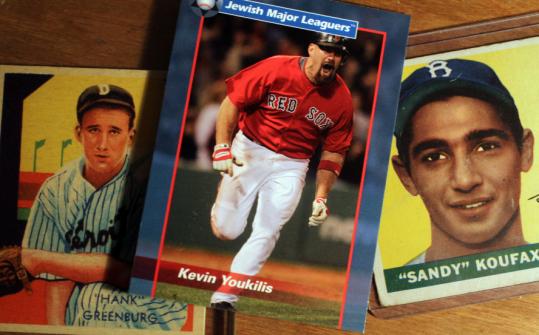 As a boy growing up in Brooklyn, Martin Abramowitz pictured himself coming up to bat in the bottom of the ninth with the score tied and the bases loaded in the seventh game of the World Series at Yankee Stadium. Naturally, he won the game for the Yankees.

Reality eventually replaced daydreams, and Abramowitz realized a baseball career was not in the cards. But his love for the game never diminished. Like many Jews, he credits a Hall of Famer slugger for the Detroit Tigers.

“I think historically it has to be Hank Greenberg who had the biggest impact attracting Jews to baseball,’’ said Abramowitz, 70, of Newton. “Because he brought in the generation of immigrants — I just got a physical chill — he brought in a generation of immigrants and it was their kids and grandkids who became the sportswriters, the statisticians, the media people, the broadcasters, the owners, and most of all, the fans.

“And they were positioned in a way to be reignited again when Koufax came to town.’’

Like many other Jews, said Laurie Tishler Mindlin, she was glued to her black-and-white television when Sandy Koufax pitched the Los Angeles Dodgers to the World Series title in 1965.

Mindlin, who grew up in Danbury, Conn., and now lives in Andover, was 11 when Koufax opted not to pitch Game 1 of the Series against the Minnesota Twins because it fell on one of Judaism’s holiest days, Yom Kippur.

“I remember everybody talking about it in the synagogue,’’ Mindlin said. “That it was really taking a stand and being unafraid to be Jewish in the public. So there was that kind of a pride.’’

Mindlin is executive director of the Merrimack Valley Jewish Federation, which is screening a new documentary, “Jews and Baseball: An American Love Story,’’ at 4 p.m. Sunday at Osgood Landing, 1600 Osgood St. in North Andover.

Abramowitz is featured in the documentary for his role as president of Jewish Major Leaguers Inc., a nonprofit organization that documents Jews in professional baseball and produces a set of baseball cards tracking their careers.

“At its heart, this is a film about overcoming stereotypes,’’ said Lexington native Peter Miller, 49, the film’s producer and director. “Bigotry against Jews has faded a great deal since the time when Jewish athletes had to change their names in order to play professional baseball. Fans and opposing players no longer shout the kinds of insults at Jewish players that they directed at players like Hank Greenberg and Al Rosen in an earlier era.

“In recent years, we’ve had many Jewish All-Stars — including Boston’s Kevin Youkilis — but hardly anyone notices anymore. I think this is a positive development, and a sign that our society can at times overcome its biases and be a place that welcomes immigrants and outsiders.’’

Miller, whose favorite players as a kid were Red Sox pitchers Luis Tiant and Bill Lee, said the documentary is his first baseball-related project, and described it as a movie he needed to make, its appeal extending “to viewers who are neither Jewish nor baseball fans.

“The story of a once-marginalized people finding their way into the American mainstream offers lessons for a country that continues to grapple with its ideal as a place where talent should overcome prejudice, where we can retain our differences while still being American, where anyone who can hit or pitch or run can be a part of the magic and drama of our national game,’’ he said.

The release of the film, which is narrated by Dustin Hoffman, “comes at the end of a remarkable decade of explosion of interest of Jews in baseball,’’ Abramowitz said. He listed a Greenberg documentary, a biography of Koufax, two programs at the National Baseball Hall of Fame and Museum in Cooperstown, N.Y., and the launch of his organization’s baseball cards as earmarks of the trend.

William Simons, 61, a native of Lynn and Swampscott who is a history professor at the State University of New York Oneonta, saw it at the Hall of Fame.

“I think it was an excellent film,’’ said Simons, who is also the editor of the Cooperstown Symposium on Baseball and American History. “It really dealt with Jews in baseball, going back to Lip Pike,’’ an outfielder and second baseman who played in the 1870s and is believed to be the first Jewish professional ballplayer, “and the very first season of the National League right up to the present.’’

Simons has authored several articles and contributed to several books on Greenberg.

“Certainly the two major figures in the film are the two dominant figures in Jewish baseball history, Hank Greenberg and Sandy Koufax,’’ he said, but “it also gave the context of baseball in the larger society. So it wasn’t just baseball as baseball.’’

Sol Gittleman, 76, who teaches “America and the National Pastime’’ at Tufts University in Medford, grew up a first-generation American in Hoboken, N.J., with parents who could not read or write English, but who understood the appeal of baseball.

Gittleman points to the documentary’s historical context. “It takes two generations to sort of move into the mainstream. The Jews that came over from 1880-1920 finally got their Hank Greenberg. The Italians who came over at the same time finally got their Joe DiMaggio.’’

By Abramowitz’s count, there have been 166 Jewish major leaguers since 1871. The newest to be added to the roster include a New York Mets player, Ike Davis, and Danny Valencia with the Minnesota Twins.

There were 15 Jewish big leaguers last season, an all-time single-season high, and 29 from 2000 to 2009, the most in any decade. The lineup includes Youkilis, former Red Sox teammate Gabe Kapler, the 2007 National League Rookie of the Year, Ryan Braun of the Milwaukee Brewers, and last season’s American League home run leader, Jose Bautista of the Toronto Blue Jays.

“It’s something that I probably won’t realize until my career is over, how many people are really rooting for me and cheering for me,’’ Youkilis says in the documentary.

“And it’s not just because I went 3-for-4 or had a great game. It’s just the fact that I represent a lot of Jewish people and a lot of the Jewish heritage and the struggles that a lot of our people have had.’’

For more details or to reserve tickets for Sunday’s screening, go to www.mvjf.org. To see a clip from the documentary, visit www.jewsandbaseball.com.