THIS STORY HAS BEEN FORMATTED FOR EASY PRINTING
Rays 6, Rangers 3 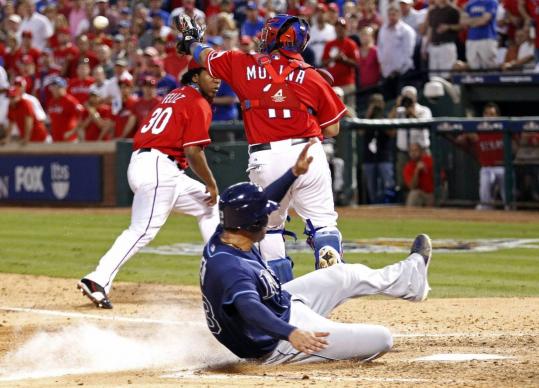 ARLINGTON, Texas — Tampa Bay’s hitters woke up just in time, and the Rays get to play another day.

John Jaso lined a tiebreaking RBI single in the eighth inning after Carlos Pena delivered a rare clutch playoff hit for Tampa Bay, and the Rays avoided elimination in the American League Division Series with a 6-3 victory over the Texas Rangers yesterday.

The Rays, the AL’s best team in the regular season, cut their deficit in the best-of-five series to 2-1. Game 4 is this afternoon.

“I was so nervous, hoping we didn’t get swept,’’ said Carl Crawford, who homered to lead off the ninth for the Rays. “I feel so much better. It feels like we’re winning the series right now.’’

Limited to one run while losing the first two games at home, Tampa Bay broke loose in the late innings.

“Your back is against the wall and everything seems to be going against you, the odds are against you,’’ Pena said. “Then you get this pause and you’re able to focus on the task at hand. We did that and it’s extremely powerful.’’

With the record crowd of 51,746 still buzzing from Ian Kinsler’s leadoff homer in the seventh that put the Rangers up and appeared to set the stage for a series-clinching victory 50 seasons in the making, Dan Johnson doubled off the wall with one out in the Rays’ eighth. Pena followed with an RBI single that made it 2-2.

After B.J. Upton struck out for the fifth time in the series, reliever Darren O’Day was pulled after facing only one batter.

Feliz walked Jason Bartlett, Tampa Bay’s No. 9 hitter, before Jaso’s liner to center gave the Rays their first lead in the series.

“I was going to use him on Jaso anyway,’’ Washington said. “Nefti comes in and doesn’t walk Bartlett and get out of that inning, and we’re going to the ninth inning with a tie ballgame and I’m bringing my closer in there anyway.’’

While Texas is still the only current major league franchise that has never won a postseason series, the Rays are trying to do what’s only been done once before.

Of the 16 teams before this year to lose the first two games of a division series at home, only the 2001 Yankees (against Oakland) have swept the next three games to advance.

“We didn’t want this to be our last game,’’ Crawford said.

The AL West champion Rangers, in their 39th season in Texas after 11 seasons as the Washington Senators, still have never won a home playoff game (0-5). They won at Yankee Stadium in their first playoff game in 1996, then lost three straight games in that series before being swept in 1998 and 1999.

Righthander Wade Davis will make his playoff debut for Tampa Bay today, while the Rangers will counter with Tommy Hunter, who was 13-4 in the regular season.

Tampa Bay hit only .247 for the season, lowest of any playoff team since the 1972 Oakland A’s. But that was stellar compared with the .125 mark for the first two games of the series, when the Rays totaled only eight hits.

Until Upton’s RBI single in the sixth, the Rays hadn’t scored in 16 innings and had gone 0 for 14 with runners in scoring position since Evan Longoria’s single in the first of the series opener.

The way the Rays had been hitting, it seemed as if the Rangers might have enough when Kinsler pulled a 386-foot shot down the left field line off Matt Garza.

Garza was done after allowing one earned run and five hits, but the 2008 ALCS MVP was bailed out by three relievers and the surprising bats.