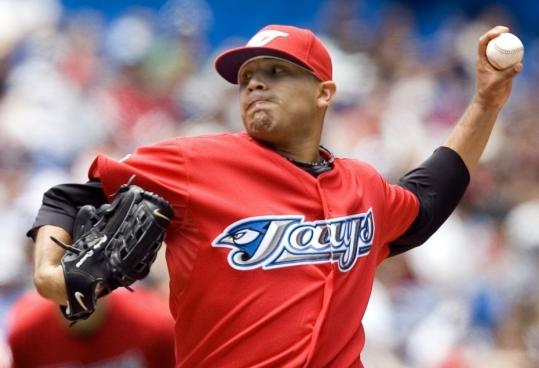 A fatigued Rodriguez, who had hip surgery in March, was held out of the lineup June 19-20 in Florida. Soon after, his swing started to come around.

“I’m feeling better. I feel more energized out there,’’ said Rodriguez, who also got a mini-break last night as the designated hitter.

Rookie lefthander Romero (6-3), who took a no-hitter into the seventh in his last start, matched the longest outing of his career in winning his third straight start. He walked four, struck out seven, and lowered his ERA to 2.85. He allowed just two hits through the first six innings.

Romero is 5-1 in his past six starts and has not allowed a run in 20 innings.

The Dodgers were 29-21 during Ramírez’s absence. The 12-time All-Star will return to the lineup tomorrow night for the start of a three-game series at San Diego.

The Mets’ Mike Pelfrey (6-3) gave up six hits and two walks in 7 2/3 innings, and Ryan Church came through with an RBI single in the sixth. Gallardo (8-5) gave up five hits in seven innings.

Twins 5, Royals 1 - Joe Mauer went 3 for 3 in visiting Minnesota’s victory over Kansas City, improving his average to .392. He’s eight plate appearances short of the 3.1 per game needed to qualify for the batting race.

With Michael Cuddyer hitting a long home run and Glen Perkins holding the Royals to one run, the Twins ended a 6-3 road trip.

Giambi’s drive in the sixth off Justin Verlander (8-4) was home run No. 407, tying him with Duke Snider for 43d place. Giambi, who has been dealing with sore legs, entered the game with an American League-low .197 batting average.

White Sox 6, Indians 2 - Jose Contreras got a rare road win as the righthander, shipped to the minors earlier this season, pitched eight superb innings and Chicago won its fifth straight.

Contreras (3-7) improved to 3-2 with a 2.17 ERA since being recalled from Triple A Charlotte, a month-long demotion prompted by the 37-year-old opening the season 0-5. Contreras had been just 1-6 in his previous 10 road starts.

Braves 11, Phillies 1 - Jair Jurrjens allowed his first hit with two outs in the seventh inning on a night host Atlanta finally gave him some run support.

Jurrjens (6-6) began the night with the seventh-lowest run support in the majors, including only five runs in his last four losses.

Marlins 5, Nationals 3 - Hanley Ramirez extended his RBI streak to 10 games, pinch hitter Wes Helms beat out a potential double-play ball to put host Florida ahead in the eighth inning, and the Marlins remained unbeaten vs. Washington this season (9-0).